Turn The Heat On & Bring On A Little Mexican Food, Will Ya?

I thought I would sit myself down while everyone is quiet at the moment, and not needing my attention.  The "Crabby Cabbie" has left for what he does best, and our "pack" are not in need of anything for the time being.

My Thursday mornings are not usually too productive as it is the morning I go to the VON SMART exercise program in Wiarton for 9:30 a.m.  By the time I get up, take Missy Mercedes out, have myself a coffee, take Bandit and Lexus out each separately for their own runs, get myself ready to go, take Mercedes out for one more "lick and a promise" before I head out, there isn't too much time for anything else.

I am pleased to report this week I was able to participate fully in the SMART program.  I felt a little more fatigued then usual, but I really think having been out walking with my friend, Sharon, the past while had helped me regain some of my strength, in turn making it easier for me participate today.

The only problem I had was after we were finished the one hour program, I started getting such a pressure headache instantly, that I knew could very well turn into a migraine.  The past few years my Doctor has given ordered me prescriptions which I was to take as soon as I felt a migraine coming on.  Well with my neck pain, it was impossible to determine if it was just that, neck pain, or the beginning of a migraine until it was right there crippling me.  Those medications didn't really help me whatsoever, so I was relieved when this past Fall he tried me on a prescription they used to use in days gone by, which consists of Butalbital, ASA & Caffeine.

Once I made it back home the first thing I did was take one pill, not two, and within a half hour any signs of a migraine that had been there, were gone completely !!!  Yeah!!! something that finally works for me and works well !!!  There is "light" at the end of the pain tunnel some days, I just knew there was ..... LOL.

Feeling better once the medications had kicked in, I got right down to making Rob and I our Dinner, which I am pleased to say was NOT Chicken.

Today I made, one of what has become one of Rob's now favorite dishes, Layered Enchilada Bake, a Kraft Recipe I found last year when leafing through some of my old "What's Cooking Magazines". 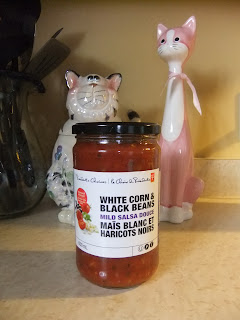 "I know when were were out shopping one time or another, I had come across this White Corn & Black Beans Mild Salsa that I had picked up in mind for this recipe, thinking it might be nice change rather then just using regular Salsa, as the recipe calls for.  I am sure the recipe must have been reasonable at the time as well, as I had bought two jars at the time."


"Once the ground beef and onions were cooked, I added a can of Black Beans, 2 tbsp. Chili Powder, 1/4 cup Kraft Zesty Italian Salad dressing and the Salsa until heated through." 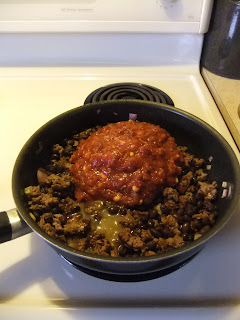 "It was then time to have everything out and ready to assemble, so I started with layering the bottom of a 9x13 baking dish with three tortillas." 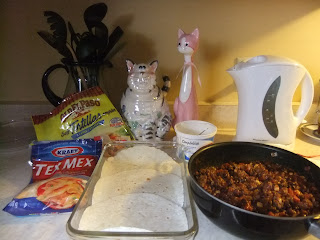 "I continued layering starting with the meat mixture, sour cream and then the Kraft Tex Mex cheese.  The recipe calls for 1/4 cup of Sour cream, but between the two layers I used up the cup that I had, then continued with the cheese layer." 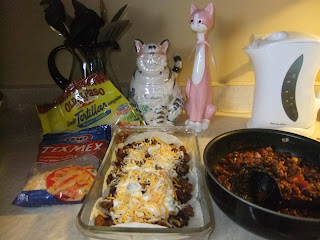 "After baking for 1/2 hour, the cover was removed and it was put back into the oven to continue baking for another 10 minutes until the cheese had melted." 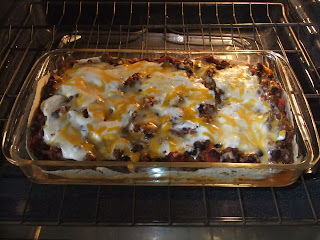 "My kitchen was a "mess", so while the Layered Enchilada was baking, I thought I had better get something done with it.  The "Before" ..... " 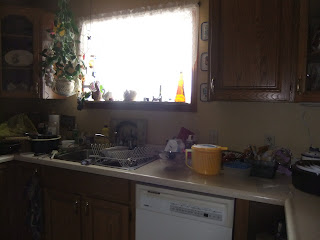 " ... and the "After".  Once I got at it, it certainly did not take me long at all.   I always feel so much better when most of the "mess" is cleaned up before I sit down to enjoy a meal, whenever possible.  I hate leaving a "mess", I like trying to clean it up as I go along, and if I didn't, surely I would run out of room !" 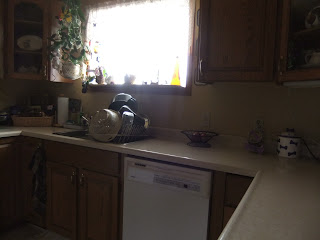 "Then came the best part after it had sat for 5 minutes and was ready to be eaten .... and boy, oh boy, was it ever good." 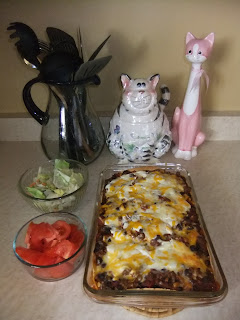 Thinking you might want to add a little Mexican flavor to your home, then this is a very easy and good recipe to be trying out.  Here it is:

HEAT oven to 400ºF.
BROWN meat with onions in large skillet on medium-high heat; drain. Stir in next 4 ingredients.
PLACE 3 tortillas in single layer on bottom of 13x9-inch baking dish. Cover with layers of half each of the meat mixture, sour cream and cheese. Repeat layers; cover.
BAKE 40 min. or until casserole is heated through and cheese is melted, uncovering after 30 min. Let stand 5 min.

Make Ahead
Freeze unbaked casserole up to 3 months. When ready to serve, bake, covered, in 400ºF oven 1 hour 15 min. to 1 hour 20 min. or until casserole is heated through and cheese is melted, uncovering after 1 hour. (No need to thaw first.) Let stand 5 min. before cutting to serve. Or, to shorten the baking time, thaw casserole in refrigerator overnight before baking as directed, decreasing the baking time to 45 min. Frozen casserole can be removed from baking dish, then wrapped tightly in plastic wrap and foil before returning to the freezer. When ready to serve, remove foil and plastic wrap and return to baking dish. Cover with foil and bake as directed.
Healthy Living
Save 50 calories and 7g of total fat, including 3g of saturated fat, per serving by preparing with extra-lean ground beef, Kraft Calorie-Wise Zesty Italian Dressing, whole wheat tortillas, fat-free sour cream and shredded Cracker BarrelOld Cheddar Cheese Light - Made with 2% Milk.
Family Fun
Set out bowls of chopped lettuce, tomatoes and avocados so everyone can help themselves to their favourite toppings.
Should you be leery on buying a bag of the Tex Mex Cheese, not to worry as it does freeze well.  Proportions for the recipe could be frozen until ready to be used and taken out the day before, as I had done.
Another Easy, Peasy as one - two - three recipe, that is now a favorite of both Rob and myself.  And just think, Rob didn't have to eat Chicken once again !!!  Imagine that???  LOL
Oh, and P.S., the Enchilada Bake had no real "heat" to it, as I had bought the "mild" salsa, which we found to be absolutely perfect for the two of us.
Now that I have been able to finish my "blog" for the day, I am thinking there is still lots of time to go meet up with my friend, Sharon, and take in a walk yet before the day is over and I settle in for the evening.
Then tomorrow brings a run to Doctor day, with going for my weekly appointment, plus blood work, up in Lion's Head, as well as a scheduled follow-up appointment with the Specialist in Owen Sound to ensure the pneumonia has taken permanent leave of my right lung.
More adventures to look forward to once again, "Just North of Wiarton & South of the Checkerboard".
Posted by Cindy@NorthofWiarton at 1/26/2012 05:27:00 pm