It Was Quite An Enjoyable All Around Kind of Day.

Wow talk about another change around in weather?  I am sure it was drizzling rain just before we went to bed last night, then we awoke to the ground covered in snow again.  As I had said the other day, Four Seasons all in one day in Bruce County !

The winds had been very high throughout the night too, as I was listening to them the numerous times I had awaken in the wee hours of the morn.

Now before I go on, and on, and on, as I usually do, I must post the recipe for the Big Batch Chicken Soup that I had made the other day, as John had made a request for it.  Here it is:

This recipe is a 5* Star in our household; freezes very well and is a meal in itself.  It is really difficult to resist a second bowl.  (PS.  John, I tried posting onto your blog, however the posting keeps getting emailed back to me that it will not go through to your gmail address).

Today we had to have the "Crabby Cabbie" vehicle over to the mechanics for an oil change bright and early this morning, so we were pretty much out of the house before 8:00 am.  Once we had dropped it off, and I had picked Rob up with our truck we headed over to our local Foodland store as I wanted to pick up another 8 lb. bag of apples for $3.97, since I almost have the first bag eaten already.  They are so good, and for an excellent price as well.

There had been some lemons and limes on the discount rack, that did not have a darn thing wrong with them from what I could tell, for a grand total of .49 cents.  I nabbed them as I need the lemons, since I am making a Black Bean and Feta Salad up tomorrow.  Sure is a savings when usually one would pay at least .99 cents for one lemon, and I got 3 lemons, limes and some oranges for the .49 cents.  I LOVE getting deals, but then again who wouldn't?

After we left the Foodland Store, Rob took a little detour before going home.  He said we never go for little drives anymore like we used to.  Well those little drives, walks together and a few other things all seemed to come to a halt once he started his own Taxi business.  This is just the way our lives have turned at the moment.

We really did enjoy our little drive, and little it was, down the road past the Wiarton Marina and back.


"The docks with the boats pulled out of the water long ago." 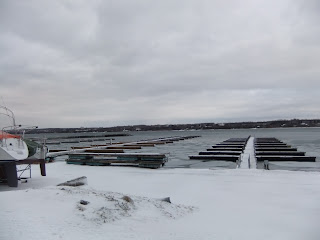 "Heading down the road, now past the Marina, which leads to a dead end and the Wiarton Water Treatment Plant.  It was really pretty this morning with all the fresh snowing still clinging to everything." 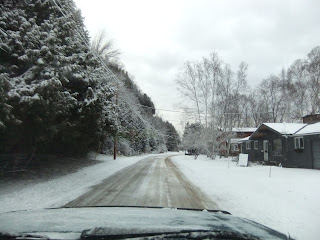 "This is almost the end of the road where we turn around to go back.  The water was so dark and black looking.  I am sure it is soooooo very cold." 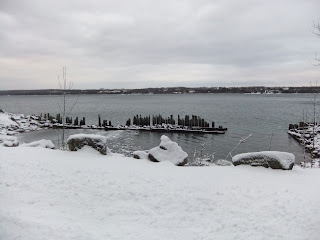 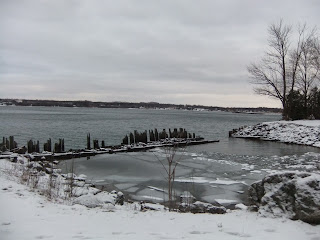 "All the boats stored up out of the water since Fall, awaiting for the arrival of Spring/Summer." 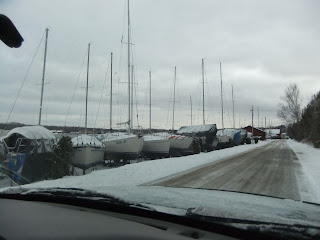 "These two photos were taken heading up the North hill out of Wiarton showing the huge amounts of ice still frozen to the side of the rock in a couple of places." 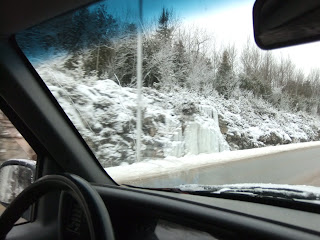 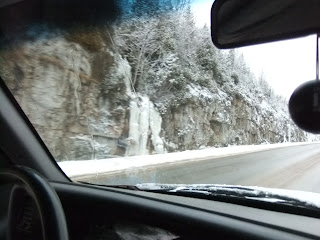 We made it back home in good time, where I folded a load of laundry, made out bed, did up a sink full of dishes, and made some postings to Cindy's Recipe Exchange on Facebook.

I had been invited out to lunch by my friend, Jessica.  We were to meet at 1:00 pm at the Green Door Restaurant downtown Wiarton.  Rob and I left here around 12:30 pm, in order for me to drop him back around to pick up his "Crabby Cabbie" vehicle before I met Jessica at the restaurant.


"This is a photo of the Green Door Cafe when Rob and I had been there last Summer." 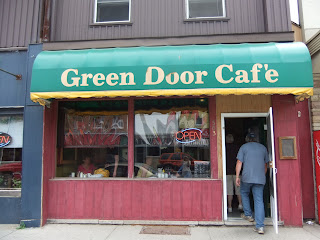 Jessica and I had such a fantastic luncheon together.  I not only had to order the Chicken Caesar Wrap, but also a side Caesar Salad as well !  Oh my, I am still "reeking" of garlic, and I LOVE every bit of it ..... lol.

Once we had our visit, as well as lunch, we both headed back out to our respective home.  I made it home by 2:30 pm just before my "Crabby Cabbie" had to head out for what he does best.

It was I day I thoroughly enjoyed.  I surely ate not only too much garlic, but too much lunch, as I am feeling a tad both on the full and weary side at the moment.

Dusk has now arrived here.  I am thinking I will not be doing too much of anything this evening other then being in and out with the "pack" a couple of times yet as I settle myself own self in, "Just North of Wiarton and South of the Checkerboard".
Posted by Cindy@NorthofWiarton at 1/24/2012 05:45:00 pm