House Bound Does Not Make For A Very Exciting Day !

Mercedes and I arose this morning, I would say about 7ish or so.  We had been already awake when my "Crabby Cabbie" had landed in around 3:30 am., then went back catnapping until it was time to get our "butts" up and out of bed to get on with the day.

We were all trying to be our usual quiet selves in order not to interrupt the "Crabby Cabbie's" beautifying sleep, if that is what we want to call it .... LOL, or my more favorite term of "uncrabby" himself sleep.  I can't run the vacuum cleaner or do much clanging or banging around, so it does limit a person to what they can do until the other person rises, at around the noon hour or so I might add.

I am really just being my usual self by poking fun, as I remember the three years I put in of working nights, and there were some days I didn't get very much sleep at all at times.  Now I think about it, I really don't think too much has really changed for me from those times?

I puttered a bit, did some updating and additions to Cindy's Recipe Exchange on Facebook, , tidied up the kitchen, made a couple of phone calls, and then ..... did the dreaded Book Work that needed done from December, as I had been too sick up until now to even think about it, or maybe not wanting to think about it.


"Ahh, the dreaded tools of the trade, along with the "big black Column Book" can be rather frightening at times, but I got 'r done !" 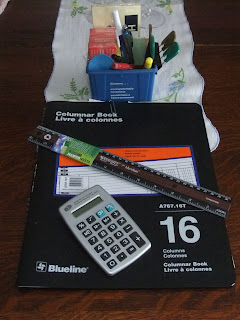 Rob did arise from the depths of our bedroom around the noon hour, whereas I got right down to getting the bed made, having a shower, getting our Dinner of leftovers heated up and cleared up, the dishes washed up and folded the load of dark clothes which were still on the clothes horse in front of the woodstove and put away.  Then I sat and had myself a coffee with Rob before he had to put on his "Crabby Cabbie" hat and go out the door for the remainder of the day.

The weather has been quite nasty here most of the day with the snow coming down steady and the winds just now picking up here going on to the 5 o'clock hour as I glance outside the patio doors.  There have been a few times where I haven't been able to see our bush line which is only two fields back from the house.


"I am of the opinion we might yet get some nasty weather before Winter is all done and over with." 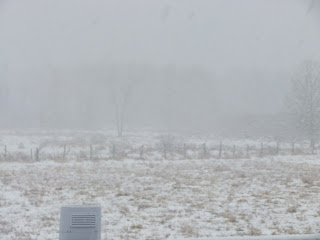 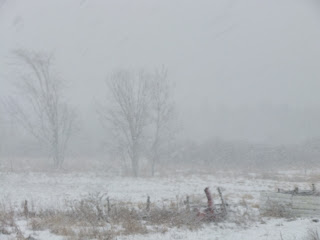 The Weather Network has a Snow Squall Alert out for Bruce Peninsula ~ Tobermory ~ Sauble Beach, as well as the Saugeen Shores area, Southampton and Port Elgin, where Rob works out of.

Snow squalls are now developing in the Grey - Bruce region. The squalls are expected to continue to affect portion of the region through Sunday. Total snowfall accumulations of 30 cm can be expected locally.
Tis' the Season, and considering the wicked Winter we had last year, we have been getting off pretty easy this year I would say !
This month of January I had participated in a No/Low Spend Challenge put on by Carla over at her My 1/2 Dozen Daily blog.  Since Rob has been working away at his own business the past five months now, it is very difficult to work out a weekly budget with an erratic income, so it has become more a less a "tracking where our money is being spent" exercise for me.
Carla has begun another such Challenge for the month of February, adding a Decluttering Challenge as well.  I signed up to participate in both.  Should there be anyone else up for the challenge(s), you may also do so by going to her No Spend/Decluttering Challenger 2012 and signing up.
I am curious to compare how well we do on the spending in February in comparison to our January spending.  I know there are different things going on or whatnot, but I do find it interesting to "track" expenditures as it can be a real eye opener at times, showing where you can maybe make some adjustments in your spending habits, etc...
Now the decluttering challenge, that is going to be "fun".  I hope my energy fully regains itself in order for me to participate the way I would like to.  I am not going to be at 100% full speed, but I am pretty "pumped" up  over the challenge and looking forward to making some headway in this area in the next month.
It will be fun doing the before and after photos, although I am sure there are some areas I won't want to do the "before" photos .... *blush* .  LOL !  Are closets NOT a real Blessing at times, or closed doors for that matter?  I know there have been times I have had to pick up the "chunks" with unexpected or short notice company coming and closet and doors have been a real life saver in my eyes !
Saturday nights I look forward to watching the Kraft's What's Cooking show on City TV, hoping the recipes they demonstrate will appeal to me, as most times they do.
I am really starting to think I am addicted to recipes !  For years there are times I would spend an afternoon poring over a recipe book, page by page, like some would a novel ... LOL .  I LOVE IT !!!  I will own it as my addiction if that is my worse one.
Wow, where has the last hour gone to, as it is almost six o'clock already.  I think I will call it a "wrap" by hitting "publish" and heading out to my kitchen to make myself a hot cup of Java, "Just North of Wiarton & South of the Checkerboard".
Posted by Cindy@NorthofWiarton at 1/28/2012 06:04:00 pm