Got Rid Of A Little Bit Of That There "Cabin Fever".

Once I got out of bed and moving it ended up being a pretty somewhat of a steady day for me today.

First off I had to look after the "pack", then sit down and have my morning Java, whilst I thought about what I was going to do with my day.  Since I had already taken Chicken Thighs out of the freezer yesterday to make Big Batch Chicken Soup this was a definite on my agenda.

After I enjoyed my Java, I got a load of whites in the washing machine, as it is "cheap" hydro on weekends and I certainly try my best to take advantage of this all I can.  Once those were all washed, I got it all hanging nicely to dry on the clothes horse in front of the woodstove.  Should be all nice and dry by the time evening rolls around, or I just might leave it to be folded until tomorrow morning.


"This is how the day first started with heavy snowflakes floating down and around on everything." 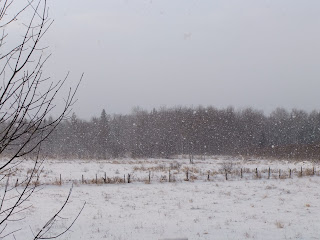 "Then arrived the Sun in all its glory making its way down to "kiss" the Earth." 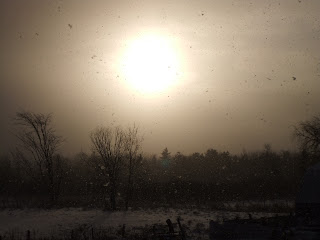 I proceeded to open up the recipe book to the Big Batch Soup recipe when I realized I used up the remainder of the Chicken Broth in the freezer the past week to make Chicken Noodle soup for Rob's lunches, and had absolutely NO chicken broth in the house.  *Sigh* since I had it on my agenda and the Chicken Thighs were thawed, I readied myself and ventured out on my own downtown to our local Foodland store to purchase some Chicken Broth.

This was the very first time I had ventured outside the house on my own since I had been sick, and I did pretty dang good, barely winded at all, having more energy then I have had since before I got sick.  Feeling much much better !


"When I was outside I also scooped back the snow and picked myself some fresh parsley for the soup.  Can't beat getting fresh parsley on the 21st of January, now can you?" 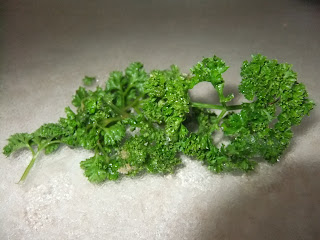 Once back home I got down to chopping, dicing and getting everything needed for the soup into the stock pot and simmering away.  Also my "Crabby Crabbie" was up and having his coffee, so Mercedes and I didn't have to be too quiet anymore.

Our Dinner was an easy task for me today, as there was Chicken Parmesan and veggies, as well as Macaroni and Cheese leftovers, so it was just a matter of heating things up, plating them and enjoying.  Easy peasy as one-two-three .....

With Dinner over with, the soup well on its way, and the Sun out in full force, I thought, "what the heck, why don't I call up my friend, Sharon, and see if we could manage a little walk this afternoon".  This is exactly what I did.  I then drove into town and Sharon and I headed uptown for a walk.

Sharon and I took in a couple of shops uptown then had ourselves a nice little walk.  We took it pretty easy, but I am hoping to eventually ease into the walks we were doing before I became sick.  Sharon and I hadn't been out for a walk since Christmas Eve Day, and it seem like months and months had passed since we had last went walking together ...

Hopefully it shouldn't take too long to get back where we were with the length of time we were walking.  The most important part of this all I was able to rid myself of some of the "Cabin Fever" I have been feeling for over the last week or so !!!  Yeah !!!!

I got back home from our walk just in time before my "Crabby Cabbie" had to leave for what he does best and make him up a bit of a lunch to take along with him, or he probably would have left with nothing .... silly, silly guy.

Sharon had tried a recipe I had posted this morning to "Cindy's Recipe Exchange" on Facebook, and had sent along a piece for each of us, so this I included in Rob's lunch as well.


"Weight Watchers Cheesecake Squares Recipe is what Sharon had made.  Doesn't it look good?" 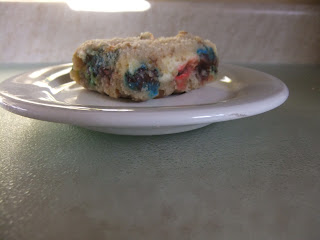 Preparation
1. Preheat the oven to 350 degrees F.
2. Beat the margarine and brown sugar until light and fluffy.
3. Add the walnuts and flour; mix well.
4. Reserve 1/2 cup of the crumb mixture; press the remaining crumb mixture into bottom of a 8″ square pan.
5. Bake at 350 degrees for about 10 minutes.
6. Combine the softened cream cheese, granulated sugar and vanilla; using an electric mixer, mix at medium speed until well blended.
7. Add the egg; mix well.
8. Layer 1/2 cup of the Smarties or M&M candies over the crust; top with the cream cheese mixture.
9. Combine the remaining candy and reserved crumb mixture; mix well.
10. Sprinkle the crumb mixture over the cream cheese mixture.
11. Bake at 350 degrees for about 20 minutes.
12. Let cool completely before serving.

Cabbie" later and see what his take is on the situation.

With my "Crabby Cabbie" gone, I decided to take full advantage of what was left of the afternoon Sun by taking Bandit and little Missy Mercedes out into our back field for a "run".


"Now really, who do you think has the upper paw in this situation?" 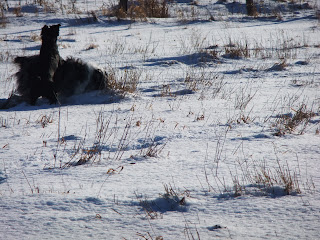 "Catch me if you can .... Mercedes has a lot of growing up to do yet before she will be able to  catch Bandit." 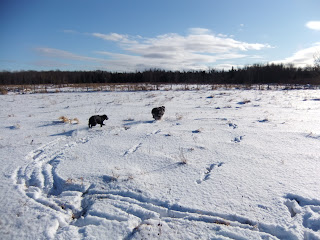 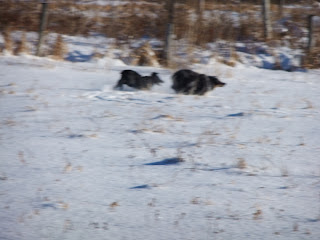 "Hey everybody, where did you all go to?" 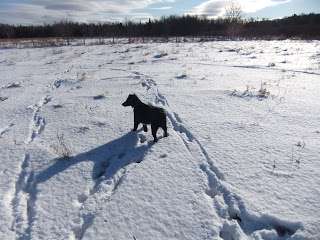 We all had a pretty good time out there.  I know Missy Mercedes is all "pooped" out, as she has been passed out sleeping since we returned back into the house.

Here is is going onto the 5:00 PM hour and it is still light outside.  Isn't it absolutely wonderful ???  Gotta love the light, taking all the energy you can from it.

*Sigh* I am feeling pretty weary at the moment, thinking I won't be doing anything too strenuous the remainder of my day, by maybe taking it a little bit on the easier side, "Just North of Wiarton & South of the Checkerboard".
Posted by Cindy@NorthofWiarton at 1/21/2012 05:10:00 pm