Yes my Rob had "gone fishing", and that would be "ice" fishing not regular off the dock fishing, although there has not been much ice in the open waters it was totally possible.

Rob used to go on an annual ice fishing trip, and did so the first year we moved up to Bruce County, but until this weekend past had not.  The guys made their annual trip the weekend after Valentine's Day, so there would not be any conflict of interest with the wives/girlfriends, very smart guys.


The first night there there had been 2 fish caught, and Rob's was one of them.  It was like a "cat fish" he explained to me, however without the barbs, whatever type of fish that had been.  The other guy had caught a "weird" variety as well (1st photo). 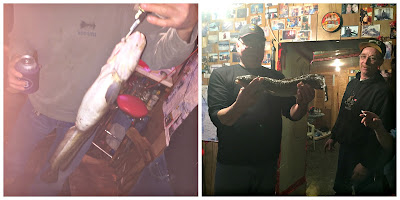 Along with my Cousin Jim, Rob and another guy, had headed out last Friday to Mattawa, up past North Bay, for a 2 day ice fishing excursion.  It took them a day to travel up there on Friday, and they returned back home on Monday.  Just  nice little get away for everyone (including wives/girlfriends).

While they were gone I was more then entertained .....

My son, Paul, made a surprise visit by coming up to spend the day with me on Saturday.  Everyone was happy to see Paul !!!!  We ended up going up to visit my Mom, having a luncheon out together, then going for a quick visit to my brother's before Paul headed back home at 3 pm.  It had been a good day. 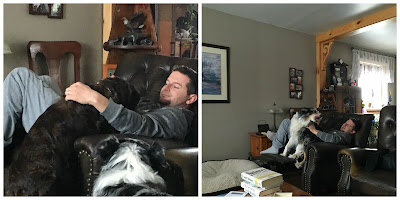 The remainder of the weekend I was sufficiently amused and entertained by these three, Bandit, Leo, and Portia.  As anyone can tell by these photos, Leo the cat has most of the rule in our home except when Bandit might think otherwise and puts the run on him ..... never a dull moment at our house. 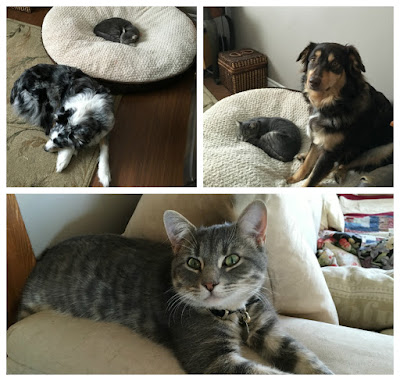 We have experienced a wintry storm the last day, however the Sun has returned this afternoon, and I hope Winter had had its last "hurrah" with us (wishful thinking on my part I am hoping not).