The First Big Ride Of The Year !

6:00 am came very early this morning, especially to me when I had only 5 hours sleep.  Really I should not even think about complaining considering MY Crabby Cabbie Rob never arrived home until 6:00 am himself, and I never did drag myself out of bed until 7:00.

Once everyone and everything was done I could get done quietly as not to wake Rob, out I went to retrieve a bunch of Rhubarb.  Before I showered I made a Rhubarb Custard Pie.


Very Easy Peasy to make this recipe I found HERE.  We have not had a chance to try it today, so hopefully tomorrow I will have an opinion to voice on what we thought of it. 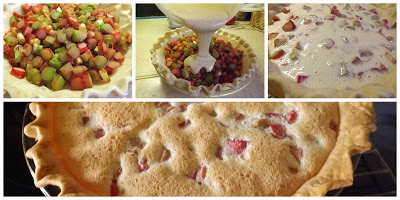 While Rob slept Doug, Vicki and I went on up to the Sunday Fleamarket minutes up Hwy. 6 to the Handicraft Place.  The place was jammed, and parking difficult to find but we managed to find ourselves a spot.  We sauntered around for a bit.  Vicki got a good deal on a pair of Polarized Sunglasses that fit over regular eye glasses for $25.00 including taxes.  Doug and I did not make any purchases.

I could not believe Rob was up when we got back home.  He barely had any sleep if you call 5 hours sleep.

We were going to head out on the Motorcycles for the afternoon, the first big ride of the year, however waited until the Forever Home came to pickup the Blue Merle Male puppy.  There are now only the two Black Bi Male puppies available for Forever Homes.  At least for the moment they have each other for company.


Hahaha, at the Fleamarket there was a guy trying to take out a couple of people but did not seem to have any luck at doing so.  Must have been something to do with the calibre of Wooden Rifle he was using.  When we did set off on our bike ride I had taken Vicki by surprise as she had not realized we had came up behind them when I snapped these photos.  Gotcha Girlfriend ! 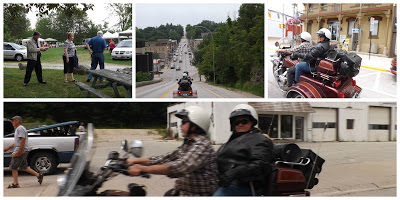 Yes MY Crabby Cabbies work is never done.  Before we had left the house he had a call to do a pickup and a drop off.  No rest for the wicked they say, and my husband must be one of those wicked ones. 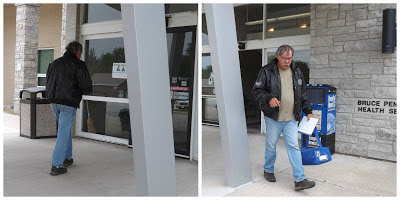 We took the scenic route the back way into Owen Sound.  While there we had a bit of a break and had ourselves a coffee at one of the many Tim Horton locations there before heading back towards Hepworth to check out Duffys Farm Gate Market since they had their Grand Opening this weekend.


Apparently it was a very happening place yesterday with the bands playing on Stage.  A lovely outdoor patio, a fired up open grill BBQ and all the pomp and splashes of Canada Day Celebrations were in evidence. 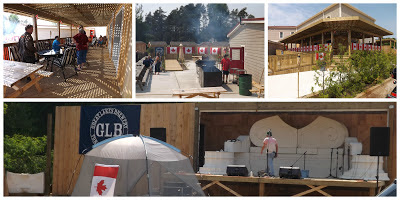 Inside the Phase 1 of the Market was set up and fully equipped.  Bakery items from Dales Bakery, an Ice Cream Vendor, as well as a Maple Syrup Vendor were to the right of the front cashier. 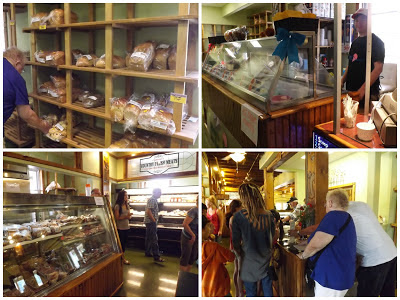 To the left was the Cafe for Food and Beverages, as well as a Meat Market. 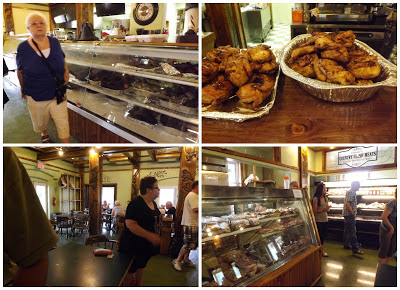 It will be rather exciting when Phase II gets up and running with all the outside booths filled with Vendors.

We all had decided today we would go out for Chinese Food at the Kings Buffet in Owen Sound.  I am sorry to say Rob and I had been very disappointed, and Vicki too, in the meal we had there.  There were a few dishes that had tasted a bit off to Rob and Vicki.  The Roast Beef sitting under the heat lamp looked like it had been there since lunch time, with nothing fresh brought out until we had finished and were walking out towards the door.  Really for the amount they charge and what we had, we have decided that will be our last time dining at the Kings Buffet in Owen Sound.  Not our first bad experience there, but hopefully our last.

When we got back home, Rob high-tailed it to bed, while I took everyone out and about before sitting down to do this blog post.  Once I get the two puppies settled in for the night, and have the rest of the gang out and about for the last time for the day, I will be then calling it a night myself thereafter.


Oh yes this morning I had dusted off these three Geese and put them out on our Deck so they could get some fresh air for the rest of the Summer. 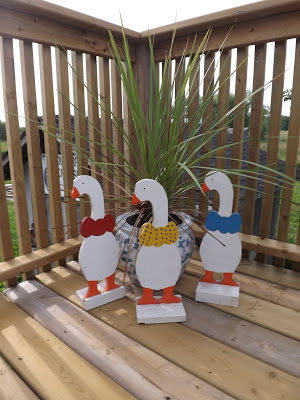 There is lots of Canada Day activities going on tomorrow in Wiarton, some of which we will be checking out ourselves:

Spelling or Grammar errors if there are any, I am really too tired to care.  On that note I am off, but not too quickly, Just North of Wiarton & South of the Checkerboard.
Posted by Cindy@NorthofWiarton at 6/30/2013 07:16:00 pm