All About The Everything 8

Whew! another humid day here again.  I really did not mind too much as a Migraine never came with it today.  What a relief that was.

It was a very busy morning, as the Everything 8 puppies having visitors coming this morning.   The little Blue Merle female, Trixie, and her Blue Merle brother, Oliver, were going to see their Forever Home families.

Everyone arrived within minutes of each other.  We were kept very amused by the Everything 8 for at least 2 hours.


Trixie's Forever Humans were not only busy with her, they were busy with everyone !  They had even brought along toys with them.  The little Red guy decided he was going to make off back into the pen all by himself with the froggy stuffie.  Oliver was busy with the bear. 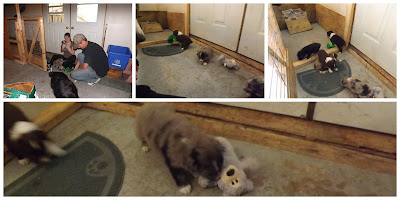 Bandit had to get in on the action, even though he isn't even Daddy of the bunch.  He decided since he had new people here he was going to get the ball to try and entice them into a bit of fetching action.  He had those people pegged right as he sucked 2 of them in to throw ball outside with him. 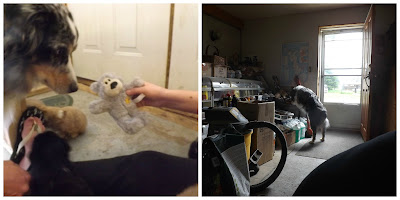 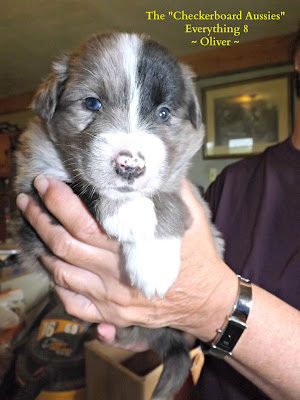 Oliver's humans now understand why he is the heavyweight of the Everything 8 litter, as they seen him in action not missing out on every given opportunity when Mama Mercedes passed by his way.  What a guy !

Everyone left by the noon hour.  The Everything 8 bunch were all tuckered out as this was the most action they have ever had in their little lives.  Tomorrow will be another big first for them as they will be introduced to solids.  Stay tuned as there will be more changes coming, this I can guarantee ....

This afternoon I had to head over to Owen Sound to Walmart to pickup some Puppy Food, as well as meet up with my friend, Toni with an "i".  We had coffee together then did a ramble through Walmart afterwards.  Shopping with someone other then your husband sometimes can really be a nice change up, or so I thought.

After I had left Toni, I headed over to my friend, Sharon's.  Sharon was sweet enough to give me her old towels.  I always can use old towels from time to time with 4 Aussies and for the times we have pups.  Sharon also gifted me a a couple of lilies for my planters.  Lucky girl I am to have such great friends.

Oh my after the heavy rains had stopped this afternoon the Sun came out to make it even more humid then it already had been.  Thanks goodness the Sun has gone back in with a breeze happening out there right now.

I think I will call it an early evening here tonight, as tomorrow will be another "puppy adventure", "Just North of Wiarton & South of the Checkerboard".
Posted by Cindy@NorthofWiarton at 6/01/2013 06:34:00 pm

Email ThisBlogThis!Share to TwitterShare to FacebookShare to Pinterest
Labels: The Everything 8 Forever Home visit
Location: South Bruce Peninsula, ON, Canada