I have been missing my "Point & Shoot" Camera.  The new Fuji S4600 is nice, but it is so bulky, not really as handy as the smaller version which I could just pull in and out of my pocket in an instant.  What to do, what to do .... I was pretty pleased with the photos I took with my old little Fuji too.

*Sigh* ... even when I am out with the dogs, the newer camera is heavier and more awkward to handle when I am trying to handle one of the "Checkerboard Aussies" at the same time .... what to do, what to do?

I am not in the market for a new camera, as I have already put out enough "shekels" for this new Fuji, so I suppose I am going to have to make the best of things and carry on ....


"I was thrilled when I noticed the flowers on the Zucchini plants this morning." 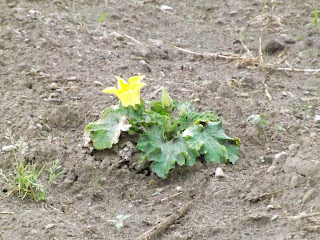 "Does it not seem too early for the Hostas to be blooming?  I am sure I have asked this same question in past years ... lol, where does time go?" 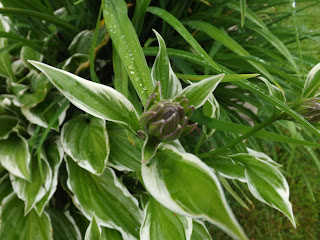 "The Cora Bells are so lovely and dainty, are they not?" 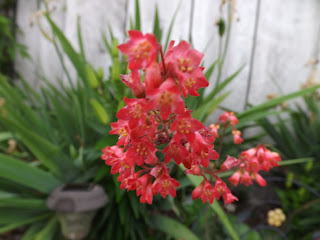 "Portulaca, one of my favourite "heat tolerant" flowering annuals." 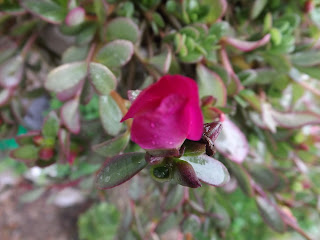 Once I had been out and about, a few times I might add, outside this morning in-between bouts of rain with our "Checkerboard Aussies", I then resorted myself to cleaning up the kitchen, doing some dishes and sweeping up some Bandit up off the floors (not him per say, but parts of him meaning his hair, lol).  I did all this as quietly as I could since my "Crabby Cabbie" hadn't arrived home until 3:30 am, and was in much need of his "de-crabbitize" himself sleep.

Upon checking my emails, I seen I had received an email from one of my "blog" readers, who I have been corresponding with on occasion.  Marie had not too long ago lost a little dog companion.  I could imagine how lonely it is not to have your best friend by your side day in and day out.  Marie went on a quest to replace her loved one with another, hopefully as loving and much fantastic company as her last.

Finally Marie came upon a Rescue in the area of which she resides, where she applied for her "Sparkles", who is now in her life and adding many new "sparkles" to it.  Here is Marie (with her permission, of course), and Sparkles story ....

I am honoured I have been part of Marie's journey in her search for her new "Forever Companion", and look forward to all her new "Sparkle" adventures.  If Sparkles could speak for herself, I am sure I would be hearing lots of wonderful stories she would have to share about Marie being her new "Forever Companion" too !  Thank you for sharing with me, Marie, I do so feel honoured !

My Rob finally arose just after the lunch hour, in need of more sleep then what he had received, this I am certain of.  Since he only had part of this day off this week, the plan for this time was for us to go retrieve the Fridge and Stove my niece and I had found for her last week on Kijiji.  Once a coffee had been had, off Rob and I went in the downpour of rain to Meaford we went.

Thank goodness I had down those "three bags full" of laundry yesterday, and most of our lawn cut.  These were my foremost thoughts this day !  LOL.

"All I can say is I was thankful the rain had somewhat subsided when we arrived in order for us not to be too drenched while Rob managed to load the appliances onto our trailer." 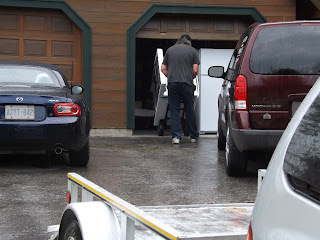 "Just on the outskirts of Owen Sound, we stopped in at the Habitat for Humanity, where we got a fantastic deal on a brand new dehumidifier for which we really need for our basement.  It is also Energy Star, best for any savings on Hydro consumption.  I estimate for what we paid, we saved at least $50.00 or more, so this we were both pleased about.  These stores are "hit & miss", so today was our "hit" day, thank goodness.  I have been searching for a deal for some time for one of these ... patience does pay off at times !" 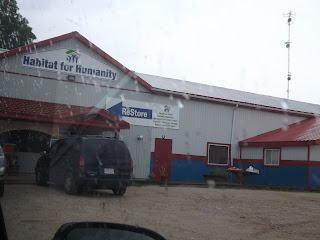 We made it to my Niece's in Tara, however by that time the rain was coming down pretty good, so we took that time for Rob to have a tour of her new "digs".  Finally the rain let up a bit, so we were able to get her appliances in and the old stove that had been left there, out into the garage for her.

I am pretty sure it was almost 6:00 pm by the time we arrived back home, both tired and hungry.  We had picked up a Deli Chicken at the grocery store on our way through Wiarton, baked some french fries and I made up a coleslaw for our supper.

I was thrilled to find I had received some new photos of Injaca, one of our "Spectacular Six"  puppies, from his new Masters .... two of Injaca's firsts !


"Injaca's first time being groomed.  What a wonderful boy he is standing there so nicely." 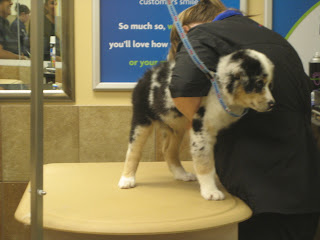 "Injaca's very first time at a party.  Wow I am sure he will want to keep going to parties, as there are friends to play with and the hostess gives you treats, just for sitting !" 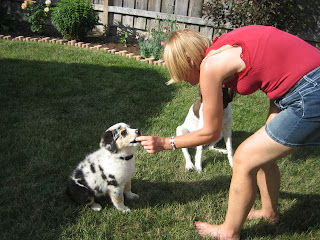