Hooray ! The Garden Is Planted !!!

I have just came in from finishing up with the "Spectacular Six" puppies, with their pen all cleaned and washed down, Buddy also having been looked after having a big walk around our property while bouncing after a few frogs in the hay field, in the rain I might add however light, Bandit out a half hour earlier, with the girls having had already been out when Rob was at the veggie garden.

My day started out in its usual fashion with me going on to get some things that were priority, needing my attention before anything, while a load of laundry was washing first thing.


"I was gifted enough Rhubarb for 2 - 4 cups bags to go into our freezer." 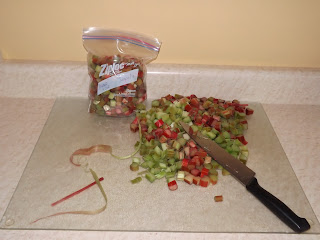 Darn, I got sidetracked after the Rhubarb, as I just now remembered I have Blueberries needing washed and bagged for the freezer as well. 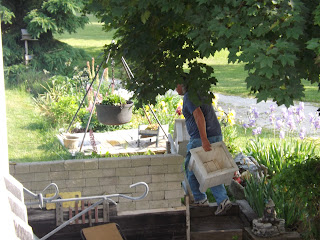 "While I was doing inside chores, Rob was getting an outside project done by painting up these planters we had bought on the "swap group" last month." 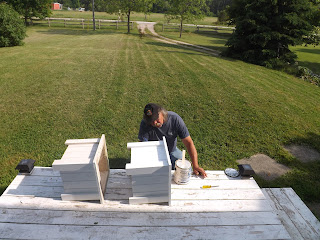 Rob and I also had some downtown errands to do this morning, number one being a new battery for the Goldwing, as she got to spread her wings today for the first time since last Fall.  Man there was a lot of dust to remove off her ... lol.

We did get into the garden today, regardless of the 90* F (or 30*C) weather we were having with the humidity.


"Rob is planting his Radish seeds here; don't be fooled by him, as I am the one who planted all the tomato plants, the pepper plants and most of the Leeks.  Although I do have to give credit where credit is due, as Rob did all the tilling today, and that is very hard work, especially in the  heat of the day." 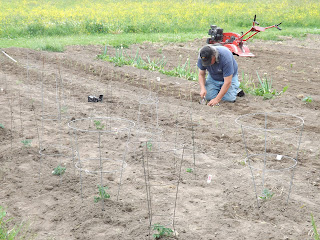 While Rob was changing the oil in and spiffing up the Goldwing, Lexus, Mercedes and I were planting some of the planters.


"The "pot" over the well with Straw Flowers." 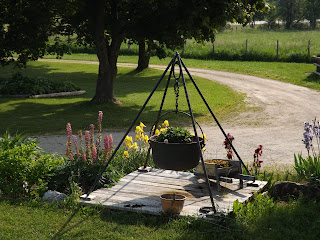 "The basket on our deck with daisies." 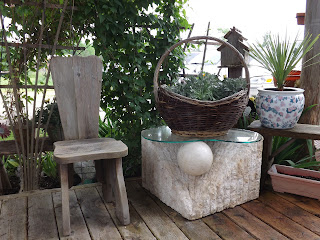 "The 2nd coat of paint had been dry for me to plant the wooden planters .... hooray !  Oops, didn't get around to doing the whipper snipping by the looks of things, and was just reminded again by posting this photo, *sigh*." 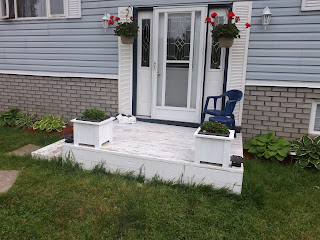 Finally about 4:00 pm, we headed on down the road on the Honda Goldwing's "wings".  The old 1984 gal, even though still much younger then I, got us over to Owen Sound and back with not a problem.  We had to go to Owen Sound, as I wanted to do a bit of shopping for my Mother as she is in need of some new Capris for the upcoming Summer, also picking up a couple of small things at Walmart since we were so close by.

Rob took us into the Tim Hortons, the one with the Coldstone Ice Cream, where we tried our very first Blueberry Banana Smoothie.


"There were certainly some pretty tempting ice cream flavors at hand." 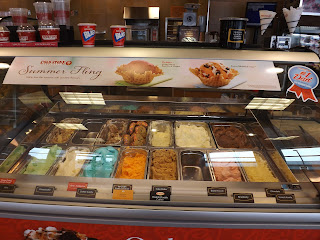 "Also with a very tempting selection of what to eat the ice cream out of." 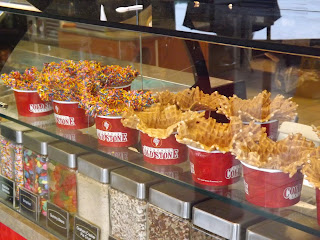 "Rob watching the girl making our smoothies with a look of excited anticipation." 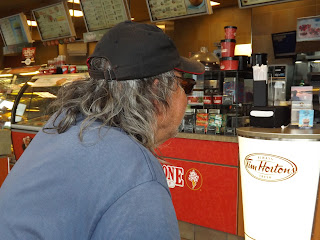 "They sure looked good from a distance." 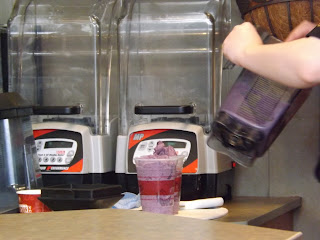 "And Man Oh Man, they were really good once we got our hungry little paws on them !  Although we found them very expensive, it was a "treat", not something we would have on a daily basis by any means." 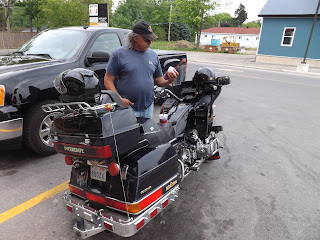 We returned home rather late, with Rob back out in the garden to plant some seeds we had picked up in Owen Sound, while I made a couple of phone calls to "firm" up dates and times when the families were coming that each of the "Spectacular Six" had picked out to be their Forever Homes ....

Then it was the per usual, as goes our lives, with going to bed knowing the garden has been planted and a lovely light rain is descending down upon it, "Just North of Wiarton & South of the Checkerboard".
Posted by Cindy@NorthofWiarton at 6/11/2012 10:10:00 pm