It was "cold" this morning when I got up and out of bed .... brr.  What a change from the days before with the 30*C temps !  Perfect weather to get that whipper snipping done and the rest of the lawn cut when it dried up from the rain we had in the wee hours of the morn.

My poor "Crabby Cabbie" had  been called out at 1:30 am, with returning back home  and unable to get to sleep until 5:00 am.  I most certainly know what that feels like; it not being the greatest feeling when you are so tired.  When I got up just before six, I was as quiet as I possibly could be .... good thing he is not in the Dog House, as it might not have been so quiet?  LOL


"I had Blueberries I had bought a few days ago needing washed and packaged up for the freezer.  This got done this morning to the tune of 6 cups, minus a few handful in processing." 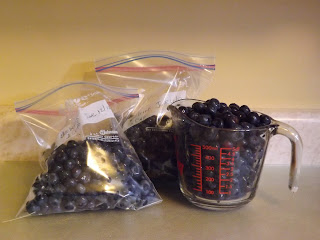 Rob finally arose, with us once again having to head downtown for a couple of errands again today.  Connor will be turning 5 years old (already) on the 21st of June, so a gift was purchased for him, a trip into our bank, a drop around to our mechanics, and into the Foodland Store to pickup a few more plants, as they had just received a new shipment in today.


"Rob wanted something more trailing for the front door then the geraniums that we originally had there." 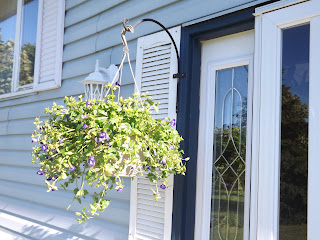 "I had also needed a few annuals for a couple small areas needing plants." 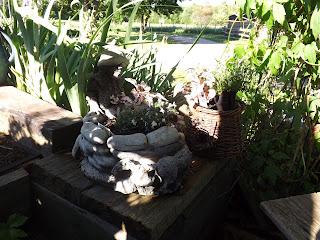 "One pot of the Geraniums have been moved to this location, with still being undecided of where I will be putting the other basket as of yet." 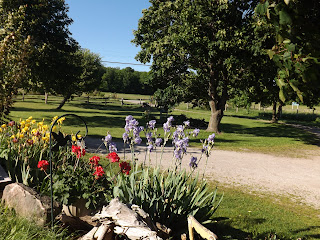 I was rather disappointed as I had forgotten all about planting Zucchinni until after I had spoken on the phone with my sister, Donna, last night.  Darn, darn, triple darn it all the store only had one pot with 2 plants in it !!!  I have Rob on a mission when he is around and about with his "Crabby Cabbie" vehicle to check out a couple of places for me in his travels to see if he can get a couple more.


"We also managed to get this area tidied up somewhat.  Oh darn, now looking at this picture, I realize I need a Portulaca for the basket on the door !  Portulaca are very heat tolerant, so do pretty good in this location.  Oh the little white stool?  This is what I needed it for ..... " 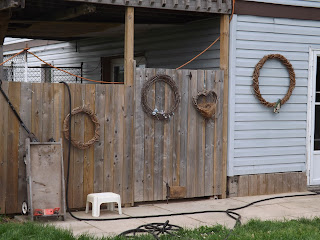 "I was trying to "spy" on the "Spectacular Six" today, since when they hear me or see me they go crazy !!!  and people ask whether I will have a difficult time parting with them or not.  How difficult can it be to part with six little cannibals nipping at your ankles all at once?  LOL" 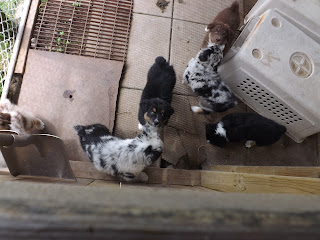 "Isn't Winston (I hope that is what his new girl is still calling him) one handsome fellow?  He most certain is solid, that I can personally testify to!" 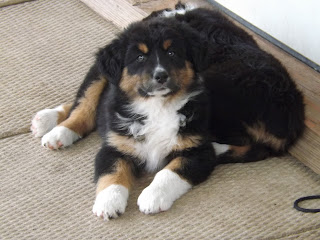 "Oops, as I feared, I have been spotted .... and of course by the "One & Only" puppy left looking for his new forever home.  He has a face beyond his age, does he not?  I am sure he is an old soul with a bit of the devil in him, lol." 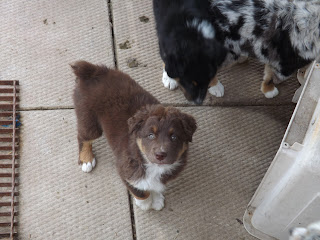 "Yes this is where the six have had many fun games over top of this kennel top." 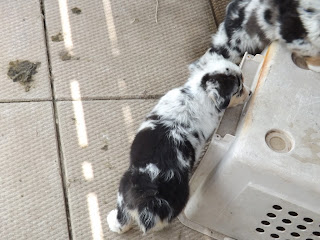 "Darn, spotted by another one of them..." 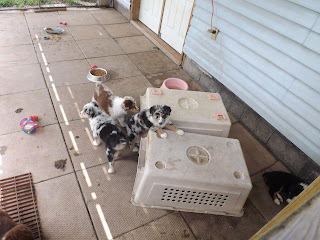 "Injaca is usually the first of all to be there like the "dirty little shirt" he is.  It is almost like, "hey lady, do you think you could get over on this side with us???" 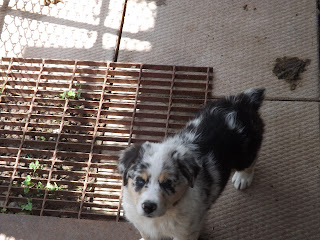 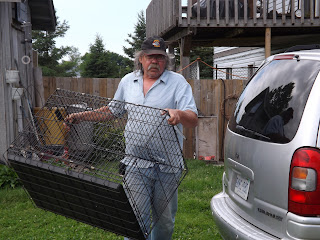 ".... as tomorrow will be the day the "Spectacular Six" go for their first ride in the vehicle to the Vet for their very first check up and set of shots." 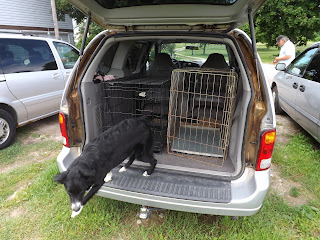 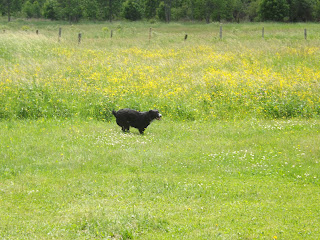 "The "Checkerboard Aussies" most certainly were enjoying the much cooler weather today.  Here is Missy Mercedes just a giving her." 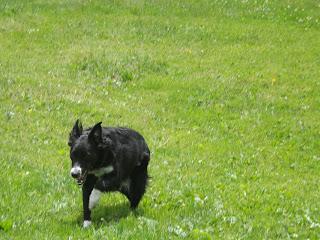 I really should try to get another nice photo of Buddy to post, as I have been so proud of him the past few days.  Sunday was the very first day when before taking him out, on command, he sat at the back door, sat and stayed until I told him "okay" (this all being done on a lead of course).  Baby steps with some progress being made, but pretty good considering he only came to us on Mother's Day.

It is a lot of work training a dog.  You must be consistent and more then anything patient.  "Patience is a Virtue" in all things.  LOL, I read an article in the Kitchener-Waterloo Record Newspaper once, that if people were as consistent with their children as they were in training there pets, it would be a lot different World out there ..... I tend to agree there is a lot of truth behind that statement.


"Happy days were here again, as Rob finally found the Dust Buster I had been pining over for months now.  It has an extra long cord, and will be perfect for doing the stairs and around the foyer, rather then dragging out the vacuum cleaner at times.  The Dust Buster for the Buster Bandit's fly away hair !" 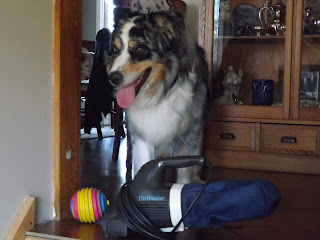 By the time lunchtime rolled around the migraine I had been trying to ignore was being relentless, so I buckled and took my meds.   Two o'clock rolled around with the meds not even making a "dent", my vision turning blurry with me seeing double ... and really now, there are just some things a person does not want to see two of, at the best of time .... sorry honey, that was really not directed your way !

Feeling very ill from the migraine by this time, I took myself off to bed before my "Crabby Cabbie" had even taking his leave for the day.  I actually slept it off after 1 1/2 hour of sleep !  Wow, something I don't do in the daytime very often, but I am ever glad it worked.  I never got done even a bit of what I wanted to do today, dang, dang, triple dang, but I did get rid of that dang migraine, so that was something....


"Oh yes, I did so manage to get the Birthday Boy's package ready for the Post." 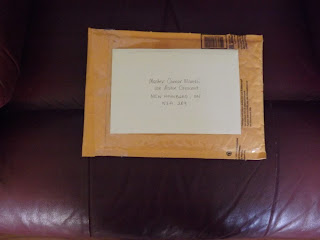 Holy windy and cold out there now ... I best be getting my butt into gear by getting the "pack" in and out, along with the "Spectacular Six" all settled in, as we all have a big day tomorrow, "Just North of Wiarton & South of the Checkerboard".
Posted by Cindy@NorthofWiarton at 6/12/2012 09:12:00 pm