Ups & Downs In This Day

This morning the roads seemed a bit snow covered and slippery to me, or so I had thought when gazing through the front window at the highway this morning.  Since I just got going back to my every Friday at the Doctor's again last Friday for my weekly allergy shot in the arm I didn't want to start putting them off again.


"Rob drove me up North of the Checkerboard to the Doctor's in Lion's Head, as you see the roads really were a bit "tricky" in some spots." 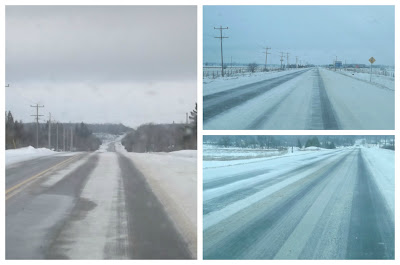 We were in and out of the Doctor's this morning in good time.  My Blood Pressure was a little on the "high" side this morning, with it being no wonder at some the things I have been dealing with on a personal level this past week or so, then to top it all off my day continued ...

When back home I went downstairs to take a Roast out of the stand up freezer to find it was defrosting.  What a chore that was, mostly for Rob, as he went down to find the fan was no longer working in it.  Out everything had come so he could investigate further.

"Once everything was apart he found the fan behind the panel had somehow broken a blade.  We are thinking a container of soup had its lid come off, freezing down behind in turn causing the damage.  Good news? a friend had lent us this littler freezer for the chickens we had been planning on raising last Spring so it had still been here to use in our bit of emergency.  Secondly we called Square Deal Neil's Appliances in Southampton to find we could order the fan for $4.99 and it would be in on Tuesday ... phew !"

"Frustrated with having a couple of down days and not getting to the recipes I had thought I would start organizing this week, or anything else done for that matter, I started gathering them all up to remove from the dining room table only to have had knocked over one of the candles and it breaking.  When picking it up I had to off course get a shard of glass in my finger that bled like a "stuck pig" taking three bandaids to finally stop it." 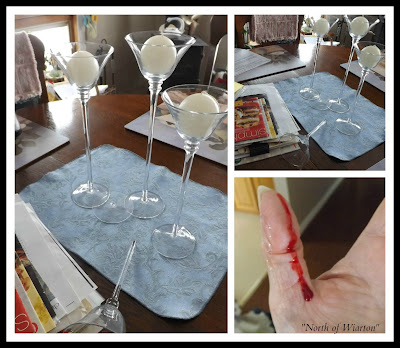 When I had started to make an apple pie Monday then realizing the oven we had just bought the day before did not work, I had been halfway into having the apples all peeled.  What had I done with these apples?


"I had sliced them into water with lemon juice, then put them on parchment paper on a cookies sheet into the freezer.  Today I remembered about them when I had needed some freezer room and got them put up into Freezer bags.  Look how nice they have "held" their colour."

"Back to a "down" with a huge black hairy legged spider crawling across the ceiling.  Thank goodness Rob was home as he got it and BURNED it for me.  *Sigh* they just give me the heebie jeebies them spiders do." 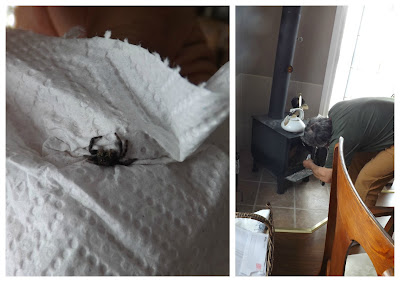 This afternoon Rob and I got to discussing about what we were going to do about a new oven range, as our old one I had put up for sale, having gotten a call on it last night, and another today.  If we were were to sell that stove , along with the refund the owner's of the stove we had bought on Sunday were mailing us, that would give us $300.00 towards a new range.  Now where would the extra money come from as I had priced out Brand new Whirlpool Full Convection Oven out today, as Rob did not want me to buy used again.  Once I had priced it out I would still need the difference between the $949.00 plus tax and $300.00.

Four and three years ago I had made pickles and sold them "roadside", along with Hostas on our front lawn.  I still had the money tucked away for a "rainy day".  The rainy day has arrived ....

"After counting my pickle/hosta money it added up to $569.00.  I then found another $40.00 left from my puppy money last year.  I am going to be pretty close to having that new Oven Range with my "rainy day" money saved from 3 years ago.  The Bulk Barn Gift Card? oh that was a gift from our Crabby Cabbie driver, Carolyn, another "up" for this day.  Why did she give us this? because she said she has not worked for better employers then Rob and I, and wanted to give us a little token of her appreciation with something she knew I would use.  This really made my day, and really the pleasure is all ours for having such an awesome employee as our "Crabby Cabbie" Carolyn."

"Unfortunately a few things had been totally thawed with there being no more freezer room for them to fit anyway in the "extra" freezer space.  With no oven I will be busy tomorrow making chicken soup, and seeing how a duck is going to cook in the Slow Cooker for me.  Today we had some of the thawed Stuffed Green Peppers cooked in the Slow Cooker.  They were really yummy with some home canned Stewed Tomatoes over top.

"Despite everything that was going on or what was being thought about this day there had still been time for those who make me *smile* at least once or twice a day.  Bandit's got the "Ah Mom more pictures" look on his face again."

Late this afternoon the gal had come to see about buying my stove.  She loved it and could not get over how "clean" and nice it was.  I try to make sure anything I sell goes out our door as sparkly clean as I can ever manage to get it.  She has bought it and is making arrangements for it to be picked up this weekend.  Then I retrieved our mail to find there was a reimbursement cheque from those wonderful descent people who we had gotten the stove from which unfortunately decided not to work when we got it home.

Rob stopped to check out the new Oven Range I had called to inquire about at Square Deal Neil's today, saying it was awesome.  I am thinking he will drop back tomorrow to have them order one in for us, as it will take until the 1st of March for it to be delivered.  The price includes delivery, setup and removal of the old stove.  You sure can't beat that kind of service, as when I had gotten a price from Sears today it was the price of the unit, plus $69.00 Delivery, plus $25.00 to remove the old unit.

This is not the first time I will have had great service from Square Deal Neil's Applicances.  My own parents had made a few purchases from them as well, many many many years ago ... and they are still going "strong" in the Community of Saugeen Shores in Southampton.

I can not wait to try this new State of the Art Whirlpool Convection Range when it arrives and is installed in our kitchen.  Check out the specs for it HERE.  I have ordered it in White, as white goes with anything, does it not?