SPAM You Say? and I ain't talking about the SPAM in the can kind ....

The past few weeks, and more so since the New Year, the SPAM has be rampart in my Email's Junk folder, on my blog comments, in Facebook groups, and now just the other day a friend's Twitter account sent me SPAM, attaching itself to my Twitter account, then spreading itself from there.  It took me three times of changing my Password to rid myself, and others hopefully, of it.  It is enough to even madden the already maddened !!!

It is all a nuisance and part of being in on the World of the Internet.  On to more pleasant topics ....

I was finding myself getting a bit overwhelmed with thinking about what was going to be done about some of items in our freezer that had completely thawed, such as all the Stuffed Green Peppers, Chicken, Peameal Bacon, one whole chicken.  I know you can refreeze meat according to the Guidelines you can find HERE, however with there being pork in the Peppers, and chicken still scares me, I just didn't want to take a chance.

I called a girlfriend to see if she had room in her freezer, as we still had 2 chickens and a turkey to find room for, as we had run out with the room we had.  Those were transported, still frozen, from our fridge to her freezer this morning.  While we were downtown we took advantage of being there to run a couple of other errands such as banking and a quick stop in at the Foodland Store as they had the 15 lb bags of Russets on sale for $3.97/bag.

Once back home I got a grip on myself being overwhelmed ....


"I made myself a bit of a kitchen list first off."

"The Bacon, Home fries and Scrambled Eggs with Rye Toast were a big hit with the two of us." 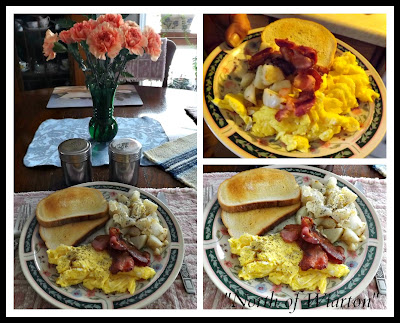 After doing dishes up for the second time today, as there had been a few stragglers done up earlier from the night before I got onto project number two.


"Preparations for a pot of Big Batch Chicken Soup got underway.  Really how could one ever go wrong with such Colours in a soup?" 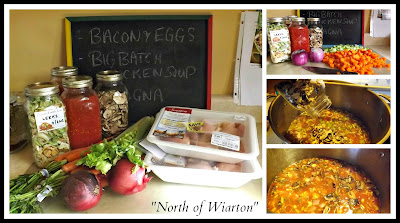 Rob found a new "bring in the wood technique" the other day, so he had been busy giving it another go today.

"The plastic sleigh had been left out from when the grand boys had been here.  He thought this was a really "slick" way to do things with the snow on the ground.  My hubby is ingenious, or so I tell him so." 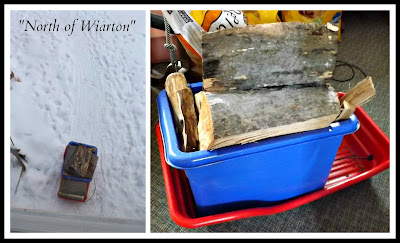 "It must have been really a lot of work bringing wood in today.  Here is the Guard Dog at the door of our bedroom.  Here is what lies within our bedroom.  When questioned why he was doing nothing while I was working so hard out in the kitchen, he had started waving his finger explaining how hard us woman had fought and earned our liberated rights.  Oh man does it ever end with this man !!!  he always has a "smart ass" response to almost everything, although there has been times I have seen him rendered "speechless".   Ha !" 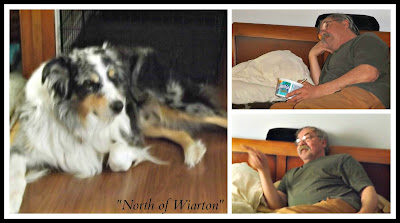 Before Rob took off down the Highway to what he apparently does best, I packaged up a Peameal Bacon Roast and some Stuffed Peppers for a couple people down that way.  I must say, he did help me with the photo session of the Fabulous Four 2013 "Checkerboard Aussies" before he left.  You might want to check out all that "cuteness" by *clicking* your mouse HERE.

"My smart aleck hubby made his way out the door, first not without a smart look and a wave "toodles" from him.  *Sigh* there are some days let me "Tell the World" !" 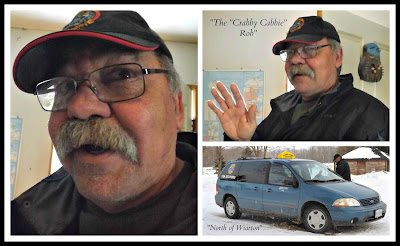 If nothing else got this day, I did manage to get a bit of this and that done, along with a whole lot of SPAM comments deleted from my blog, "Just North of Wiarton & South of the Checkerboard".
Posted by Cindy@NorthofWiarton at 2/16/2013 06:13:00 pm