I really had expected to wake up to a roaring Blizzard outside our windows this morning, but there was nothing in the way of that happening thank goodness, not in our part of Ontario this day in other parts giving us a bit of a break for a change.

Today it was my usual routine with the folding of some laundry, among other things, then hanging out a little bit with Missy Mercedes.  There are days when the girls get yakking at each other that it even drives me nuts at times, but girls will be girls from time to time.  Today was one of those days, so I thought I would fix their little behinds and separate them, in turn giving me a little piece of mind (really they are seldom yakky on a regular basis, but as I said ... some days).

The last out, about and back in this morning, I left Bandit down with his luvie Lexus while bringing Missy Mercedes upstairs to "hang" with me for a hour or two.  It was very amusing ...

"When Mercedes wasn't being a nosy girl, I had a "shadow" the whole time she was with me." 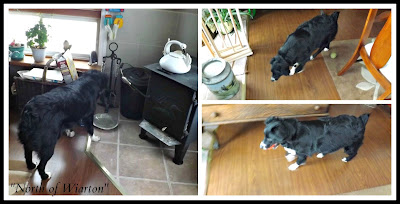 "She did have herself some fun trying to figure out which of the three toys she would walk around with in her mouth.  We did have bit of back and forth time with the ball on our "coffee break".  The next time it was out, about and back in, Missy Mercedes settled back in with her roommate Lexus, while Bandit was happy to return as "Top Dog" upstairs with me."

Rob had headed out early this morning with his "Crabby Cabbie" hat firmly on top of his head, almost getting stuck in our driveway.  Later in the morning, he had his driver take over so he could come home to take care of our driveway which had been drifted in pretty solid throughout the evening and morning..

"Yeppers he returned home unable to drive the "Crabby Cabbie" vehicle in, having to leave it out at the end of our lane way.  He got himself geared up in warm clothes, then him and Bandit headed out towards the drive shed as .... " 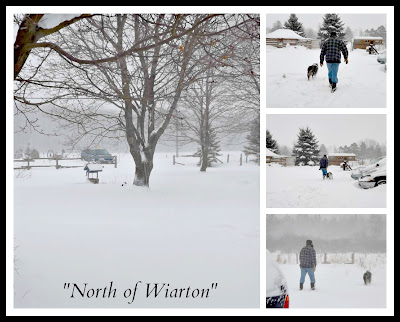 "He had to bring out the "Big Boy's" Equipment to take care of these good sized drifts ! as there had been Seriously MORE Snow."

Unfortunately a bolt had broke off the PTO shaft, so I bundled up myself to go help him so he could get the shaft attached back onto the tractor to run the blower.  It really didn't take us too long whatsoever.


"First coming out the door this morning had been a little bit difficult with the amount of snow against it.  Before Rob had gotten the tractor out he had cleared a bit of it away, however I had to finish the job right, as you can tell in the photo below .. nice and neatly done." 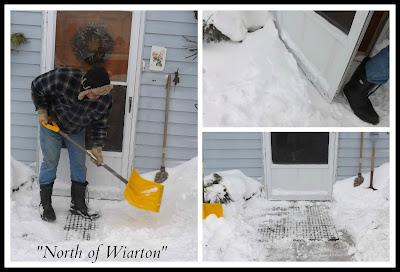 Since we were on a roll with new appointments with the weather being in our favour, I called up our Doctor's office to see if both Rob and I could get in there this afternoon. YES, we also got up for him to see both of us later today.

I LOVE when we are able to "kill two birds with one stone", makes for a clear slate later on down the line at times.

That was a FULL day once again with us not returning home until just before the Dinner hour, making it very late in the day for us.  Regardless it was nice to have both appointments looked after and done with.  The good news is my eye glass prescription never changed, so no new glasses required and a payment of $89.00 was all it took to tell me this.  *Sigh* better to be checked then the chance of them having gotten worse and caring on as such was it not?

I was very pleased today to having received another lovely testimonial on the ownership from a Forever Home of one of our "Checkerboard Aussie" Spectacular Six 2012 Litter's puppies.  You are more then welcome to take a read all about it yourself by *clicking* your mouse HERE.  Really truly I am "tickled" pink to learn on how our puppies are growing and learning in each of their Forever Homes, as that is a reward in itself.

Welcome to all new followers, who have joined me here for my daily journey, as well as the odd opinion and sometime ramblings I go on about from time to time.  Thank you.

Ooops almost forgot .... Congratulations goes out to Sandra Bates who was randomly picked to win the Note Cards from Michelle Hogan Equine and Fine Art.  I am certain being a Bruce County Gal yourself Sandra, you really will enjoy the cards !

I have four "Checkerboard Aussies" who could use my attention for the last time this evening by taking them all each out, about and back in to settle for the remainder of the evening.  By the sounds that can be heard at the moment just outside my windows the weather isn't sounding very nice, "Just North of Wiarton & South of the Checkerboard".
Posted by Cindy@NorthofWiarton at 2/08/2013 07:49:00 pm