Anyone who knows me should know I enjoy cooking, but I have had MORE food then enough since some thawed when it had been found out the other day that our freezer fan had broke.  It hasn't been "planned" by me cooking, it has been "I HAVE to get it done" cooking.  I am "pooped" and "tired" right now as I have been going like the dickens all day long, or so it seems this has been the way it has gone.

I had planned on using up the remainder of the Chicken Thighs in a Slow Cooker Honey Garlic Recipe, but realized maybe I should be cooking up the Duck first.

"We will be having Slow Cooker Duck for our Dinner tonight.  I even went out to shovel off 6 inches or more of hard snow to get at the Rosemary.  The large ceramic frypan was heated up to first "sear" the duck." 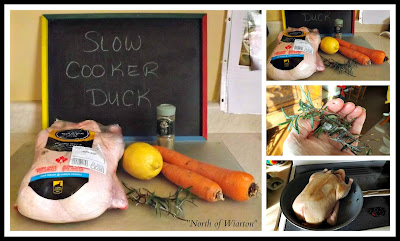 "In the "back end" & "front end" went a quartered fresh Lemon, along with the Rosemary sprigs.  Into the Slow Cooker it went on top a bed of carrot, then sprinkled generously with Lemon Pepper.  After cooking on the Low setting for four hours, the grease was syringed from the slow cooker." 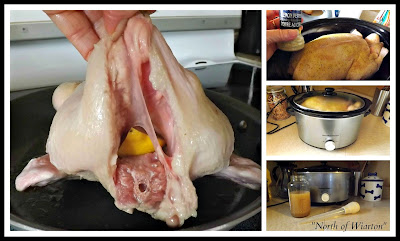 Rob had given his driver the wrong phone when he had left to come home last night.  These things happen.  Off to Southampton we had to go to make the "switch" of phones.  No matter as we met at the Saugeen Gas Bar to fill up both Taxis anyhow.


"It has been just a little blustery when first coming into Saugeen First Nations, however by the time we had gotten our gas and arrived downtown Southampton at the Cenotaph at the edge of Lake Huron it had cleared." 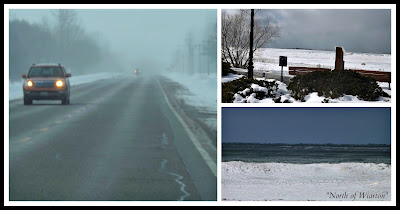 My Aunt Gerry and Uncle Reg are up visiting my Aunt Gladys (sister) and Uncle Basil this weekend and my Aunt Shirley was taking them for lunch at the Walkerhouse in Southampton.  Since we were there I wanted to wait to "hook up" with them around 1 pm so I could say "hello", as I hadn't seen them since last Summer.  Rob had seen them all last night as he had been over there phlishing some Carrot Cake from Auntie Gladys.  We had a bit a time to kill.


"I LOVE Southampton's beach and gazing out at the Lighthouse on Chantry Island.  I remember growing up looking out and daydreaming about all kinds of things way back when ....   Beautiful, is it not?" 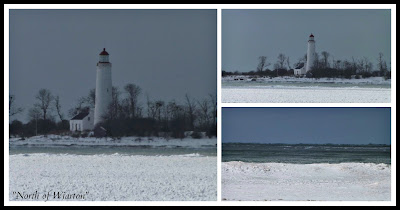 Finally we drove back up to the Walkerhouse to see Uncle Reg's van parked there.


"Here they all are ... Uncle Reg, Uncle Basil, Aunt Gerry, (my dad's sisters) Auntie Gladys, and Aunt Shirley (my dad's sister-in-law).  What a fine bunch they make.  And really I am certain Uncle Basil LOVES stirring the pot when they are all together, with a few stirs by Uncle Reg too.." 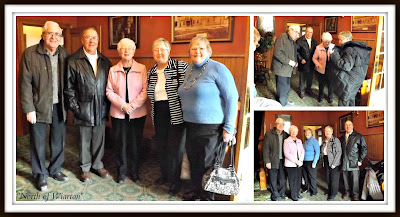 By the time we arrived back home it was 3 pm.  I still had a whole chicken needing something done with it.  Since today hydro is at its lowest rate, I thought I best be putting it in a pot to simmer as I am right out of Chicken Stock, having used it all up on the Big Batch Chicken Soup yesterday.


"I LOVE making my own Chicken/Turkey Stock, as you know exactly what you are getting when you make it yourself." 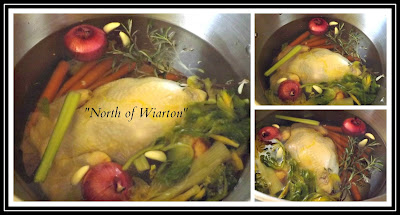 I still have two packages of Chicken Thighs that I will make up into a Slow Cooker Honey Garlic recipe ... stay tuned tomorrow.  I noticed a member on Cindy's Recipe Exchange made the "new to us" recipe; by the look of her photos it looks like it will be a "keeper".

I feel I haven't gotten anything accomplished other then cooking the last two days.  Not true, as I did do a load of dark clothes, so this was something.

Okay Dinner is finally over with, after waking poor Rob up from a much needed snooze.


"Duck was served.  Despite there not being much meat on a Duck it was just beyond fine and full of flavor.  Since Rob does not care for Duck, we are good in the Duck department for awhile now." 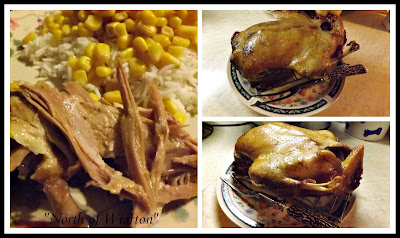 "My nice clean Kitchen looked as if a "bomb" had gone off in it.  I broke down tonight and used the dishwasher.  Before I knew it, it was back to presentable once again."

Tomorrow is Family Day, and my Crabby Cabbie Rob will not be working.  Do you have any exciting plans for Family Day?  I am thinking the weather should be good, fingers crossed, but then again what would this matter to me, I will be still cooking ... Chicken Thighs and a Peameal Bacon Roast to go.

*Sigh* I must have been really wicked in my past life to be challenged so hard in this one ... *wink*wink*.

A warm welcome going out to my newest follower, Sherry of Pondered Primed Perfection.  Thank you, Sherry, for joining me here on my daily journey with its sometimes often ramblings and the odd opinion.

Psst ... an new "Checkerboard Aussie" testimonial and photos came to me today, take a "peak" HERE.

I am tired, what else is new, so any errors whatsoever I am not too worried at this very moment.  I am off to enjoy a cup of coffee and relax a bit, "Just North of Wiarton & South of the Checkerboard."
Posted by Cindy@NorthofWiarton at 2/17/2013 08:05:00 pm