First off this morning, after of course the "pack" were looked after, got my "Crabby Cabbie" a lunch pack of 2 sandwiches, 2 oranges, 2 apples and a container of cantaloupe to hopefully sustain him throughout his long work day.  Once he had his coffee, I am sure it was before the hour of 8:00 pm he was out the door and gone.

I pretty much got going on my day not to long after Rob had left with a load of laundry in, the bed made, a sink full of dishes done up, then to the task of decluttering two more areas.  The before the decluttering pictures can be found here.


"This pile of "stuff" is ready for the garbage or burn barrel and was removed from ...." 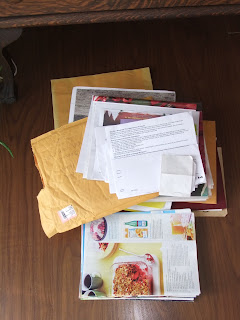 ".... the bottom two shelves of this stand, which is looking so much tidier now it has been decluttered of all that useless mess." 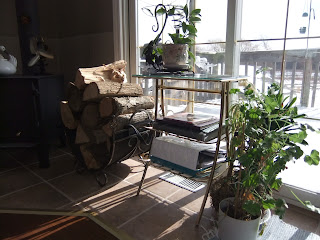 "The telephone desk was next on the declutter "hit" list.  This is a "catch all" spot in our house for me, and could use a good sweep of declutter at least once everything week or two.  Guilty as charged." 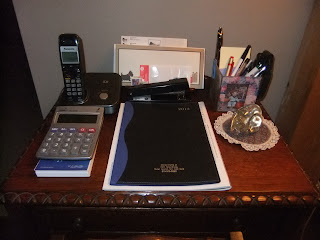 It was getting to be a little stuffy in this house after all this "stuff" had been taken care of, along with two loads of laundry, some dusting and vacuuming that was also done.  It was time to take in some fresh, very cold, Bruce County air into the lungs .... oh, had I mentioned tramping around in the snow?


"Mercedes getting her "snappers" going to move in on the unsuspecting Bandit's ankles." 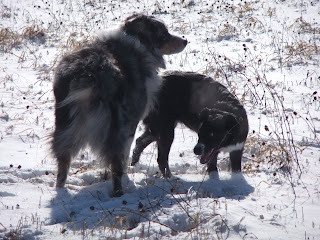 "Bandit had enough of that little "ankle biter".  Off like a shot, "catch me" if you can!" 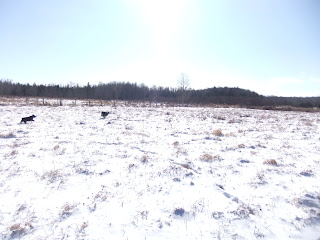 "Once we got Mercedes all "pooped" out, it was time to bring the "big" girl out." 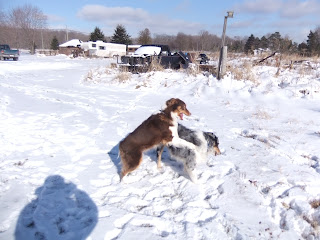 "It is quite obvious who has the "upper hand" in these pictures, does it not?" 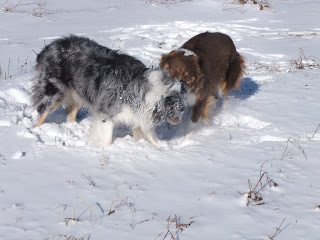 "This is where I asked Bandit & Lexus to both sit so I could take a "couple" photo of them.  I think the only thing I was getting from the two of them was the "cold" shoulder." 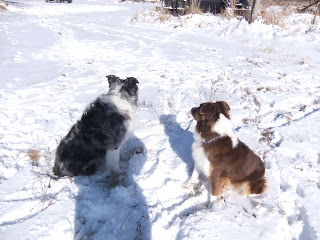 "The snow seems to blend right in with your colouring there Bandit.  Looks like you got a little more "white" going on there then you should have?" 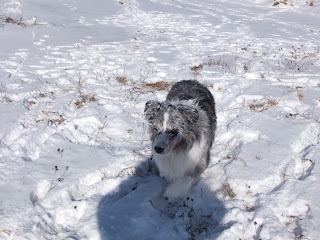 Lexus had her big romp for the day then it was time for her to go back in ..... 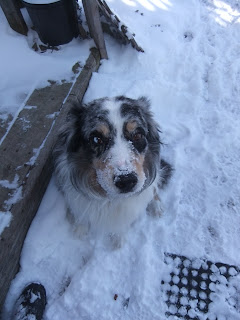 Brr, it was pretty cold, but I guess when you are running around a field at high speed most of the time, you must not feel it, but I was while standing there watching all the running around being done.  It was pretty dang cold with a North wind this morning, continuing on for most the day.  The Sun was out, but not enough to warm the cutting cold of the wind, it wasn't !

It was a good day to put a pot of soup on the stove to cook.  Today it was Hearty Nine Bean Soup.


"It is pretty darn tasty, if I say so myself after sampling two bowls full." 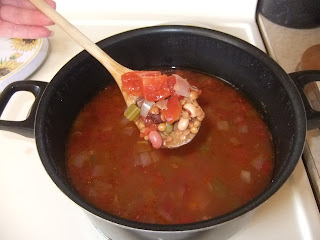 Directions:
Soak beans in cold water for 12 hours, drain before using.  In a large saucepan, over medium heat, saute vegetable oil, onion, garlic and celery for approx. 5 minutes until onions and celery are translucent.  Add soup mix, tomatoes, chicken stock and water.  Add salt and pepper to taste.  Increase heat to High and bring to a boil.  Reduce heat to medium-low.  Cover pot and simmer for 1 1/2 - 2 hours.  Stir periodically.  Ladle into bowls.  *Sprinkle with Parmesan Cheese prior to serving.

Not only was it  very good, it was easy peasy as one-two-three to make too !!!

Let me tell you, after getting home from a very cold brisk walk with my friend, Sharon, tonight, I as very happy I had made this soup, as it warmed me up as well as filled me up.  I think I left some for Rob????

The snow has just began coming down heavy here now.  We are to get 15 cm more of the white stuff tonight.

Conditions will be favourable for snow squalls tonight and Sunday.

Snow squalls, accompanied by strong winds and blowing snow, continue in a cold northerly flow off of Southern Lake Huron. These snow squalls are gradually shifting eastward, and are likely to affect regions to the east of Lake Huron this evening. Additionally, snow squalls forming off Georgian Bay are forecast to intensify later this evening, affecting regions to the south of the bay. The snow squalls are expected to persist through much of Sunday. Throughout that time, the snow bands are forecast to periodically shift their orientation, thus affecting different regions at different times. This will tend to reduce the total snowfall amounts, however accumulations in excess of 15 cm are still likely in some locales. The primary concerns with snow squalls are rapidly accumulating snow due to heavy snow fall, and very low and variable visibilities due to falling and blowing snow. These factors can result in treacherous travelling conditions.

Wow, looking at the time at the moment it is already almost 9:00 pm !  I think I best be almost calling it a night, but before I do get the woodstove "stoked" up and blasting before I bunker in for the rest of the evening here, "Just North of Wiarton & South of the Checkerboard".
Posted by Cindy@NorthofWiarton at 2/11/2012 08:52:00 pm