I was up and at it around 6:00 am this morning.  The "pack" and I got our routine over with a tad earlier with me all ready and waiting for my Great Nephew, Riley, to drop around to pick up his Birthday Card and gift Uncle Rob and I had gotten for him.  Yesterday had been his Birthday.

Riley now twelve Years old, only a little bit shorter then my 5'5", Ace of a Hockey Player, and from what I have heard also starting to be a "hit" with the girls !!!  Oh my .... lol.  My brother Al had brought Riley around this morning for me so I could see him in person, instead of putting him on the school bus.  Once kids get a certain age, they really don't want to be hanging around us Aunts, Uncles and other older people in the family, so I am sure the drop-in with my hugs and a kiss had been quite enough for him for one day.

Enjoy them while they are younger, as it doesn't take long until they are spread up in height and gone out into the World.  My baby boy is going to be 29 years old this year!

Once Riley had been here and gone, Rob and I got ready to head out for a little shopping over to Owen Sound. We were going to hit up Walmart, Food Basics and No Frills for a couple of deals.  We needed Dog Food, so we thought we would make a bit of a shop out of it as well, since prices at the big box stores are generally much cheaper then our local Foodland store.

All done our shopping, I had Rob stop at the Falls on the way out of Owen Sound, just before the Springmount turnoff to where we head back North up Highway 6,  homeward bound. 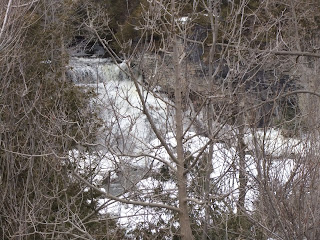 "The Falls is running good, however with a heavy Winter and Spring thaw it has been much faster previous Years.  Pretty cool how it cuts through the ice." 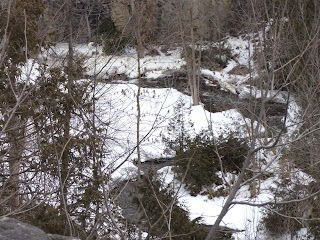 It didn't take us too long to get back home, where Bandit and Mercedes had to be let out, groceries taken in to be put away, and Dinner to be started.  Since I had made Chicken Wraps and Salad yesterday, today I used up the remainder of the Chicken in a Chicken Pot Pie using the Bisquick Recipe off the box.  This is one of Rob's favorites when it comes to "chicken".


"Diced chicken, mixed vegetables and Cream of Chicken Soup all mixed together." 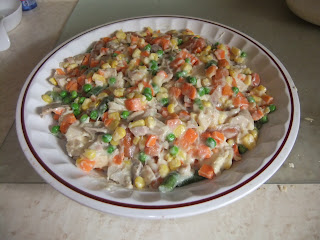 "Bisquick Mix, milk and egg mixed together, pour over top all ready to go into a 400*F Oven." 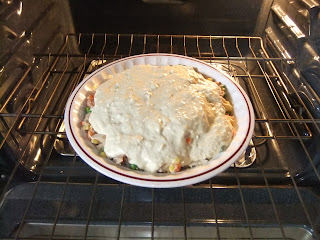 "Thirty-five minutes later and it is all ready to go." 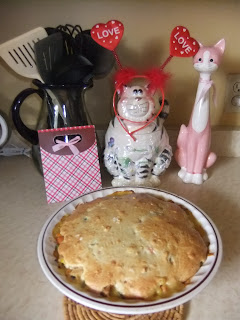 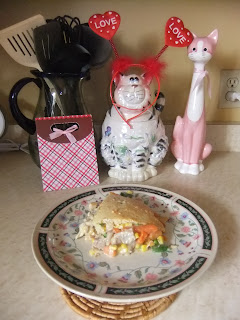 "I took this picture of my piece of Chicken Pot Pie, however Rob thought his piece was more uniformed and perfect then mine, so he thought I had best take a picture of his too.  LOL ..... this is the reason behind the two pictures shown here." 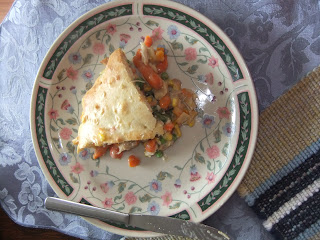 Here is the link to this Easy Chicken Pot Pie Recipe:

Finally Dinner was done and over with, dishes washed and draining, when I got to sit down for a little bit before I decided it was time to get into our bedroom to start decluttering my dresser drawers.


"I bought this T-shirt on Rob and my first date on the 26th of October 1993, when we went to see the Rolling Stones at their Voodoo Lounge Tour Concert in Toronto.  I just could not give up this T-shirt, so it has been lovingly place back into one of my dresser drawers, where every once in awhile it is taken out and worn." 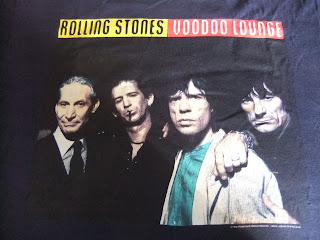 "Mick Jaggar and the Rolling Stones "rock" in my books !"

Oh dear I got off track there for a moment, now didn't I?  Back to?  oh yes, I believe I was decluttering my bedroom dresser drawers, *sigh* ....

"All of this "purged" from my drawers, now bagged up and ready for donation." 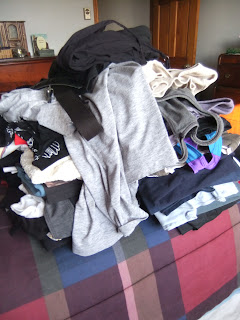 "Just a couple of small piles left to place back into the drawers, along with two drawers all ready tidy and organized, one containing underwear and the other a few Winter/warmer sweaters/tops." 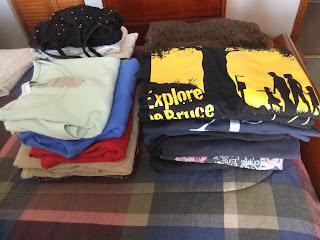 "Neatly put away, with great hopes of them remaining this neat." 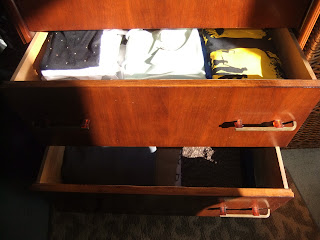 What a total relief getting our whole bedroom "purged" of stuff no longer fitting or needed!  I think one needs to get into the habit of when purchasing a new clothing item, thinking about purging an old.  And really now, how long had I held onto clothing items that used to fit me 15 years ago (most of which were purged last Spring) ?  How silly of me !  A Size 6 again?  I think NOT ....

Tomorrow brings us to the 2nd Week of Carla's Decluttering Challenge from over at My 1/2 Dozen Daily, along with a surprise mini-challenge she has not yet disclosed.

This also brings me to Carla having a "Mug Rug" giveaway yesterday, asking everyone to leave a comment on one nice thing they had done that day.  My comment had been ....

“Today I took a small leather purse I had to a friend for a little girl she picks up and takes to Church with her every Sunday.”

....which just happened to win me the handmade by Carla,  "Mug Rug"!
"Isn't it bright and cheerful?  My coffee mug is going to be real happy being placed on it.  And homemade !  Thank you, Carla !" 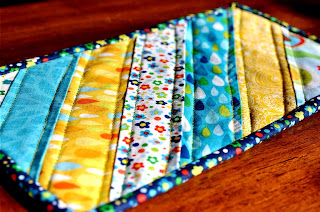 I have found out there are more winnings to be had out there in the World of Blogging, as Gill over at That British Women has two hand painted water colours done by her Step-Father of two different Telephone Boxes.  Anyone can enter That British Woman's Giveaway by going over to her blog and where the rules are stipulated, as well as viewing the pictures of the water colours.  Just head on over there by "clicking on  the following link:
http://thatbritishwoman.blogspot.com/2012/02/giveaway.html
I have already entered myself, as I think it would be quite lovely to have a hand painted water colour hanging (somewhere) in my home, so this I am counting on .... LOL.
It has been a very productive day here, "Just North of Wiarton & South of the Checkerboard".  The only "hitch" was I have been having dizzy spells the past two days, which I find can happen at the most inopportune moments at times.  They have only occurred once this morning, and yesterday after I had returned home from my walk.  I must remember to have my good Doctor check my blood pressure this Friday when I am there getting my weekly allergy shot in the arm.
Rob has already given me a wee bit of a "tongue lashing" with respect to I need to slow down again.  But it is so HARD to slow down sometimes ..... dang, dang and triple dang it all !
Pace yourself, Cindy, pace yourself !!!  Some day I will get the hang of this boring "pacing" business, maybe?
I am off, and hopefully pacing myself, as I am too tired now to do otherwise, to find something for my supper, "Just North of Wiarton & South of the Checkerboard".
Posted by Cindy@NorthofWiarton at 2/07/2012 07:37:00 pm