Repayment For A Gesture Of Kindness? Pass It Forward !

My late afternoon yesterday was spent .....


"Here I was out in the middle of nowhere "North of the Checkerboard" broke down, but at least safely off the Highway." 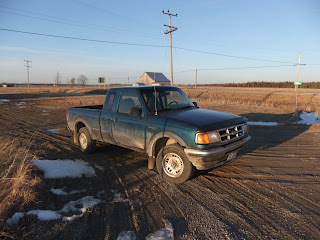 "Honestly there wasn't a house in sight where anyone would have been living, unless I would have went way up Hwy. 6 further." 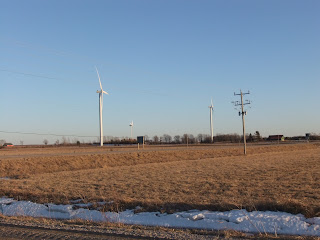 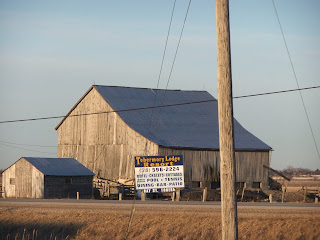 "As "good luck" would have it the guy working on renovating this place had been there, letting me  in to use the phone book just before he left for home." 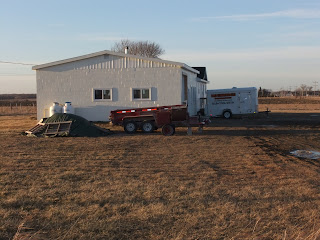 I called three different towing places between, Wiarton, Lion's Head and the guy who has the CAA truck in Mar.  Wiarton there was no answer, Lion's Head no longer towed, and the CAA guy's truck was in for repair.  *Sigh* what was a girl to do in such a situation especially when her "Crabby Cabbie" guy was working just a bit under two hours away from her?

What she did was took a chance and called her friend, Sharon's cell phone.  I was shocked when her hubby, Jim, answered, as Jim never answers Sharon's Cell phone, or rarely I was told after.  Jim didn't even hesitate when I told him what happened and where I was, and said, "I will be up to get you".

While sitting there waiting I sent off a text message to my niece, with her answering back that she was sitting in the parking lot of her employer's broke down herself waiting for a tow truck !!!  Speaking also to Rob on the Cell phone, he told me the same pulley on his taxi was making a crazy noise and was ready to go anytime soon, unlike mine having already fallen off.

Sharon and Jim came to my rescue in record timing before it got dark.  Jim offered us to use his CAA to have us towed home.  A call was then placed to CAA, where we were told the tow truck would be coming from Owen Sound and would not be there for at least an hour.  Jim, Sharon and I headed into Ferndale where we got a coffee to take back with us while we sat to wait for the tow trucks arrival.  It was dark by the time the truck did arrive.

My truck was loaded on up onto to the CAA flatbed, and we made it back home South of the Checkerboard  just before 7:30 pm.  Jim and Sharon came in to have a coffee with us, then everyone had to leave, including my "Crabby Cabbie" as he had to head back out for work.

Thank goodness for friends, as Jim and Sharon's concern and thoughtfulness was most certainly appreciated by Rob and myself.  It is really nice to have friends who do care for others.  Jim and Sharon wouldn't take a darn thing for their help, not even a couple bucks for their gas, but I will think of something !  I emailed Sharon this morning to thank them again, and she emailed back with, "Pass it forward, as I know you will".  How nice is that !

The old saying comes to mine, "you reap what you sow" does ring true at times, does it not?

Today has gone along not too badly at all, with the exception Rob had a time call for pickup at 8:00 am, but when he got there at the time order, the lady wasn't there.  He called her and she had changed the time, gotten another Cab, and never called Rob to let him know.  Poor Rob had gotten up so early to drive over 45 minutes, when he could have stayed in bed for another much needed hour or two of sleep.  *Sigh*, such is life, is it not?

Rob came back from Southampton (where he works out of), to Wiarton to our mechanics where he got his "Crabby Cabbie" vehicle's steering pulley replaced, then came home with a new pulley and replaced the the one in our truck himself.  Poor guy, then had to head back to Southampton to work, goodness knows how long into the night ..... it is so difficult for me NOT to worry about him sometimes.

Today I began working on decluttering our Sideboard for the Decluttering Challenge ~ Week 2:  Personal Area, I have signed on for the Month of February.  This is what the "before" looked like here, and this is what I accomplished today:


"The drawer which could barely be opened before, now containing only the bare essentials of what should be in there.  No Silver cutlery, as it is too much work to clean those anymore." 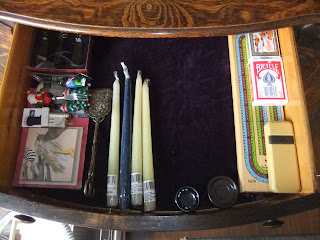 "I can actually open this door and see the good dishes in there now." 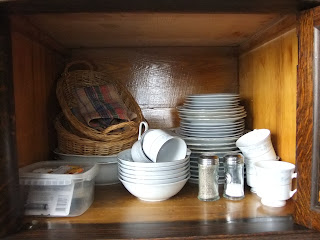 "Red Wine and Binoculars together?  It just might work some days, surely not us as we don't drink red wine !  Doug and Vicki there is backup here when you are up next, if I don't cook with it first !" 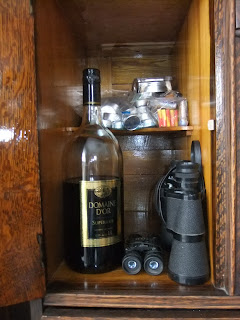 "Trivets and napkins neatly together behind the same door." 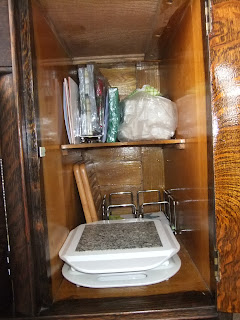 "Turkey platters, along with nicely folded table clothes (a whole pile of table clothes for the Salvation Army or a Yard Sale taken out of here).  Nice to be able to open and close the drawer properly now." 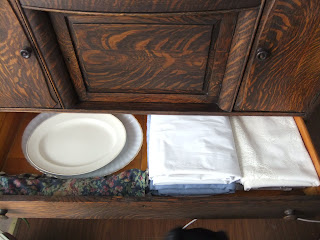 Anything we don't use, or need, is going, going and is going to be gone !  I am sure I have gone back to the sideboard at least three times since I decluttered it to open the drawers and doors to peer in with amazement.  What a "fantastic" feeling one has when organized !  Whoopee !  I LOVE it !!!

Mid-afternoon I had to head to downtown Wiarton to do a couple errands.  The afternoon also brought with it was a brisk cold North Wind and ...... 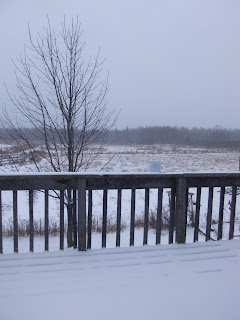 
Oh yes, yesterday I had also cooked a Cottage Roll, potatoes, carrots and onions in the Slow Cooker for our Supper.  It now sits in the fridge, as who has been home to eat it?  Not my "Crabby Cabbie", and it had been so late by the time I got back home last night.  Hopefully tomorrow I can get a hot meal into him at some point, as we haven't had one since I made Leek & Cauliflower Soup on Wednesday.

That pretty much wraps up my yesterday and today all in a "nutshell".  Remember should anyone help you out, whether it be someone you know or not, and they will not take anything in return, just "Pass it Forward" !

Um, typing about food has made me a bit hungry.  Since it is 6:00 pm, I should really think about finding myself something to fix for supper here, "Just North of Wiarton & South of the Checkerboard".
Posted by Cindy@NorthofWiarton at 2/10/2012 06:00:00 pm