It Was High Time I Attended To A "High Tea"

I am pleased with myself, that not long after I published yesterday's blog, last night, I returned a couple of phone calls, took care of each and every one of the "pack's" needs before bedtime, watched a little bit of TV and was sound asleep by 10:00 pm..  *Sigh* I most certainly was "pooped" out and then some.

Today my neck is giving me grief, as it has been all week, however I am sure the drive to Barrie and back the other day, added to it feeling the way it is, as well as, once again, not pacing myself.  Dang, dang and triple dang, it is so hard not to live life the way I desire to at times in the physical aspect of things, as I am sure I will never have to worry about winning a Lottery in my lifetime to worry about how I would spend "all that money", in respect of finances !  LOL .... never any fear of that happening.

This morning I spent doing the usual chores that always need doing in and around the house, with many many more still needing done.  My "Crabby Cabbie" arose just before 11:00 am.  Once he got himself to a more awaken state and a coffee into him, he busied himself with bringing some wood up from the basement to replenish our upstairs supply.

Rob had been hankering for a grilled cheese sandwich, so Dinner was made easy for me, as I just took a container of Big Batch Chicken Soup from out of the freezer to thaw and heat, and whipped up a couple of sandwiches to go along with it.

Rob was going into work a couple of hours earlier today, and I was heading downtown to attend a "High Tea" being held at the Salvation Army's hall, with my friend, Sharon, my Auntie Gladys and her friend, Liz for 2:00 pm..

Since a "little birdie" had told me it gets very busy at these annual High Teas, I thought it best to be getting there early to save a table for the five of us.  I left the house at 1:30, arriving down there before 1:45, to save seats all of us.  I am certainly glad I did, as boy oh boy did things get real busy in a hurry not too much longer after I had arrived.


"Oh there it is all spelled out for me, "Willie's Fancy Tea".  My mistake, but I still like the sounds of "High Tea", having to admit it was also pretty "fancy" ! 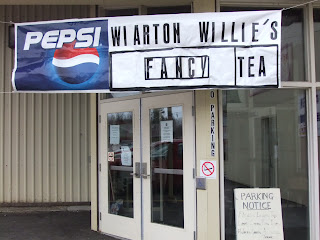 "Pretty much the calm before the "crowd" started pouring in." 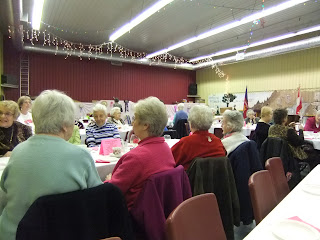 "The tables were all decorated so nicely, each with a fresh carnation in a bowl on each of them." 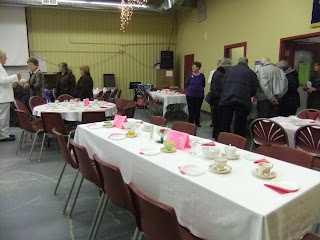 "This is Mary, the lady responsible for "Willie's Fancy Tea" the last 15 years, behind the scenes, as well as the being its front runner." 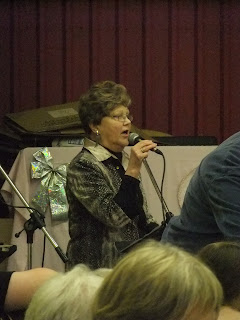 "Our local MP, Larry Miller, was in attendance to give a short speech in appreciation of the Tea." 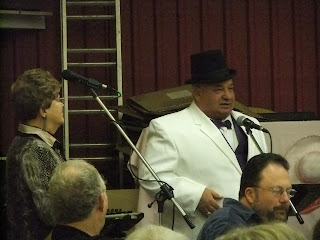 "Our Mayor was also in attendance.  This was a very heartfelt moment, as our Mayor John Close gave a speech with regards to Mary's hard work and dedication she has put into this tea the last 15 years, and regretting this will be the last year for the Tea.  A little bit of the Town's Roots will now be lost with Mary withdrawing, but hopefully not forgotten." 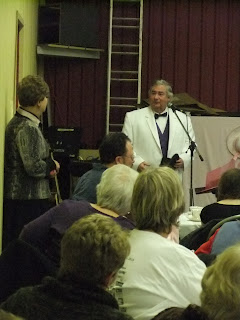 What a sad moment I found this to be, with tears in my eyes, as it is Roots that had been established with this woman for all these years now coming to an end.  I found this to be sad.  It would be so nice if someone comes forward to pick up the torch and carry on the tradition of  "Wiarton Willie's Fancy Tea".

All proceeds from the donations received at this Tea goes to charities such as the Breakfast for Children provided mornings at the local school, as well as a couple other charities I believe.  With a full house, I am sure hope the donations covered everything needing to be covered with lots left over for the charities.  Special thanks were also made to the people and/or businesses who donated or sponsored "Wiarton Willie's Fancy Tea".


"Spirits soon rose, as the entertainment was "wonderful".  There were also door prizes to follow." 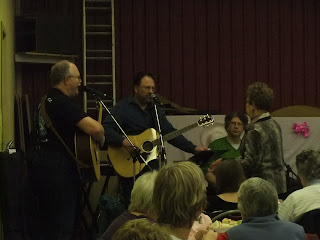 "Trust me, the entertainment was so good, there was clapping along, toe tapping, and even a couple of people up dancing." 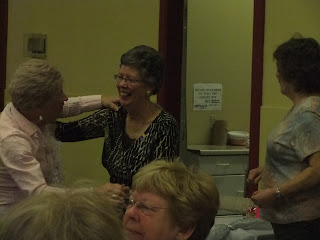 "There were even a couple of "hockey players" going up the aisles when they were playing the "Hockey Song"!  LOL, I am telling you the people participating were having just as much fun as the onlookers I believe." 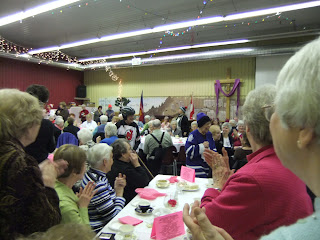 "Here is my Auntie Gladys, and her lifelong friend, Liz." 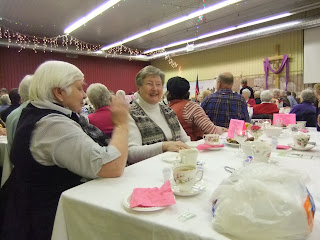 "How "fancy" was this Tea Pot we were being served from?  Pretty fancy I thought." 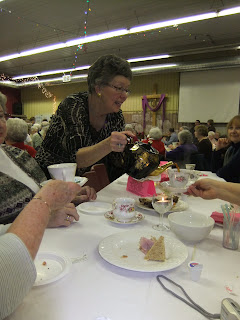 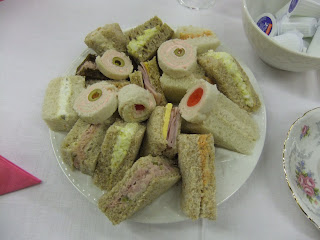 "Man oh man what a bunch of lucky people we were to not only have Tea, Entertainment and Door Prizes, we even got to partake of all these goodies." "This event would also not have been possible if it weren't for all these wonderful ladies who have volunteered their services by not only making, but donating all the goodies, and serving them as well.  What would we do without volunteers, I ask?  What a fantastic bunch of people they are !" 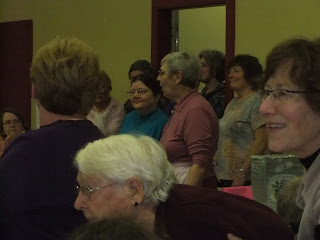 "Before it was all over with, Wiarton Willie himself even showed up to have a little visit with everyone !  This is my friend Sharon's friend, Adele.  I do not know how Sharon managed to escape the view of my camera?  Um....some how it happened." 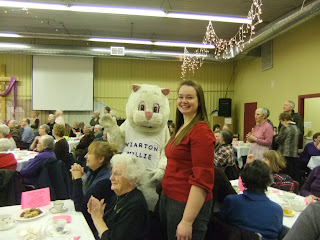 We had a wonderful time at the "Wiarton Willie's Fancy Tea", as I am sure everyone in attendance had also.

One of the speakers had referred to the old saying, "if it ain't broke, don't fix it", well something must have "cracked one of those tea cups".  Hopefully someone will come forward to carry on with the fantastic job Mary has been doing the past 15 years, and it will continue on again next year with that "crack being mended" ......

My Auntie said she had to park close up beside a snow bank, almost falling when she had gotten out of her vehicle.  When her and Liz left, Sharon and I walked them out to her vehicle so I could make sure she got in alright.


"Darn, hard iced up snow bank, but Auntie is tough and determined, so there was no problem with her making it back into her vehicle.  Way to go Auntie ! " 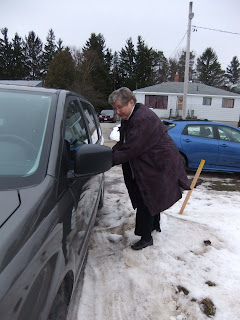 "Auntie's friend, Liz, is moving from her house into an apartment, and brought along a little gift from her for me, which she thought I would like.  Aren't these a nice gift?  I absolutely love the cup with the lid, and how appropriate with it being the Chinese New Year ~ Year of the Dragon !" 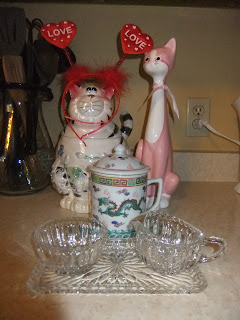 I am telling you, I am can't say enough how Blessed I am with family and friends, and how much I appreciate both, as there are so many people out there in this World who have neither.

*Sigh*  I so enjoyed going out for "High Tea", or as it was "Wiarton Willie's Fancy Tea".  I am pretty sure I got back home here just after 4:00 pm, once I had dropped Sharon back off to her house.  I have been invited by Sharon to go along down to the Tent tonight to take in one of the Bands.  I think I might.  I am pretty tired now, but what the heck, I really don't feel like doing too much of anything else now in the way of household chores, so why not?  In the 8 years we have lived in Wiarton, I have never been to any Wiarton Willie Festivities, so maybe it is a good thing I am getting to check some of them out now.

I do have a few little things I can get do before I head back out for some more entertainment later, so I best call this a wrap and get 'r done, "Just North of Wiarton & South of the Checkerboard".
Posted by Cindy@NorthofWiarton at 2/04/2012 06:12:00 pm