Once I was up and at it this morning, I could barely contain myself waiting for Rob to wake up and get out of bed ....


"I had to go outside with Missy Mercedes, so I left a note on his coffee." 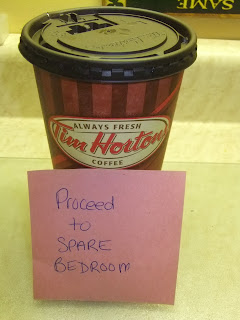 "Rob's Birthday/Valentines Surprise was awaiting him in the spare bedroom, as I couldn't be two places at once .... lol." 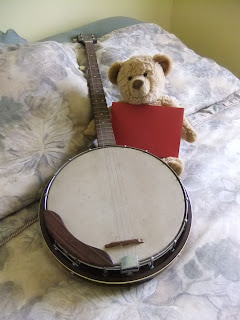 Oh my my Sweet Valentine, Rob, was one surprised guy !!!

Later on today, I had to call him, as when I had gone back into the spare bedroom to see where he had put his new Banjo, low and behold there was something there still untouched ....


"I called Rob and asked, "was there something wrong with the card I had got for you", and he answered, "what card?"  He had been so excited he hadn't even noticed the card !  How could one possibly NOT notice a "red" envelope when there was a Banjo right there in front of you?" 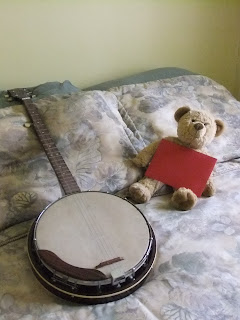 The funny thing about this was last week there was a Banjo book in the Salvation Army's Silent Auction, which Rob had me go in to place a $4.00 bid on, and he actually won.  Right after that happened this used Banjo was posted on the Lion's Head Swap Facebook page, with me being the only inquiry.  It was almost like it was a match made in "Heaven".

Since Rob has had the desire to learn the past couple of years, with neither of us knowing anything about string instruments, the girl who I bought it from said if we had the Banjo checked out by someone who knew, and it wasn't up to par, she would take it back and refund my money.  I hope it is only in need of the one string it is missing, as it was a really good deal that I used up the last of the Puppy Money on that I had put away from last Year.

I am telling you, Rob best be pretty happy with our Bandit and Lexus, as their puppies got him started with two used vehicles for his Taxi business and a Banjo !!!  He is one lucky guy that man of mine, and he really does love every one of our "pack", right down to the bratty Missy Mercedes.

Oh I must not forget, my dear Rob did get me something for Valentines Day as well. 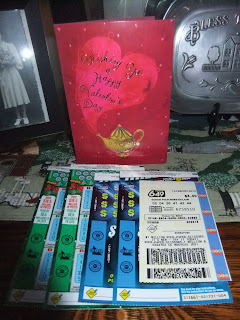 Today I had an Installer from Shaw Direct Satellite come and install a spanking brand new High Definition PVR receiver to our TV.  Wow, Rob and I are starting to come out of those dinosaur years further bit by bit, we are.... lol. 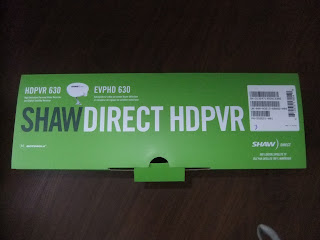 Really it was quite amazing how we happened upon a "new" HDPVR receiver from Shaw.  Bell is giving away these same kind of receivers, right now as a promotion to new customers if they take a contract with them.  Rob thought, well let's switch to Bell, then we will have a receiver to record, pause and playback what shows we would like.  I called Shaw to see if they could offer us the same deal on a receiver, and "Voila" in a matter of days here we are with one.

Rob is so much happier, as now we can even get the CKCO Kitchener station.  Whoohoo, catching up on the news in and about the old stomping grounds.  Thanks Shaw Direct !!!

Today I also gave some seriuos thought to the Week 3 - Productivity Challenge from the Decluttering challenge I signed up for with at Carla's, over at  My 1/2 Dozen Daily.  This is what I came up with to have completed for this week's challenge.


"This had been tidy last Spring, however since the kids and grandkids have been here a few times since, blankets and sheets had gotten taken out only to be obviously thrown back in." 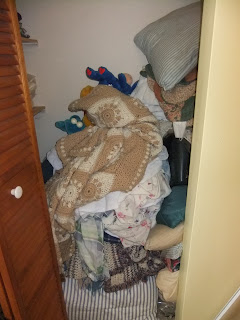 "Honestly though, how much bedding do I really need or use.  Decluttering and organizing, here I come !" 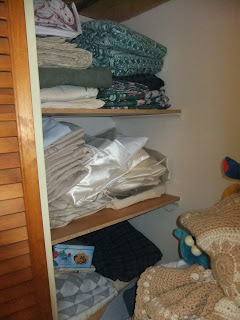 Before Christmas I had also began a "Rid your Freezer of Meat Prior to Buying More" Challenge with Cindy's Recipe Exchange on Facebook.  Now our freezers have been rid of some of its contents, by consumption, I think it is time to organize what is left, as well as to start using up some of the fruit I put down this past Fall.

Usually by this time other Years I am getting low on fruit, but we have really cut back on the deserts.  I have gone from baking once to twice a week, to maybe a couple of times a Month now?


"Our ten home grown chickens were not included in my challenge, so between the eight left and the bushel of apples I put down this fall, lots of the freezer space is still being taken up by these two items." 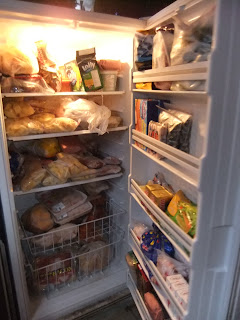 "The downstairs fridge freezer has not too much left in it." 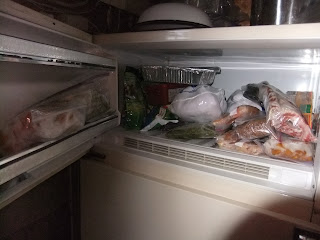 "The upstairs fridge freezer has more fruit in it then anything and is crying for a good cleaning out." 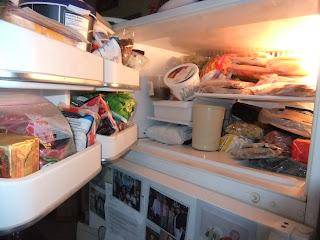 I have my work cut out for me in the upcoming week, but I know once it is over with I will feel so much better and elated by the clutter being gone, along with organization put into its place.
The nice thing about this Challenge Carla had invited myself and others to go along with her on, is knowing I am not doing it alone.  Other persons out there have the same issues as many of us on a day to day basis.
A little positive advice is always good to keep in mind from time to time as well .....
Stop cluttering your space. – Start clearing clutter.  Get rid of stuff you don’t use and then organize what’s left.  If you have a cluttered living or working space, it can be distracting and stressful.  A clear space is like a blank canvas, available to be used to create something great.  Getting truly organized and clutter-free can vastly improve anyone’s life. ~ Marc & Angel ~
For me, these words of wisdom could not ring truer.  I can now go to the places in our home I have already decluttered and cleaned in the past two week challenges, with having such good feelings about my accomplishments.  I LOVE feeling good !
I personally know it is not easy to keep on top of things as I used to, with physical aspects coming into play most days.  Taking it steadily slow, and doing things little by little can create very big accomplishments and rewards for us at times.  Like I have said before, the feeling of accomplishment is a very huge reward in itself.
Oh yes, my "Crabby Cabbie" was able to come home for about 1 1/2 hours last night for a bit of Supper.  When I found out he was doing so at the last minute I had to scramble to get something ready.  Easy peasy as 1-2-3 ....
".... a Cheese and Mushroom Quiche it was with steamed Broccoli on the side." 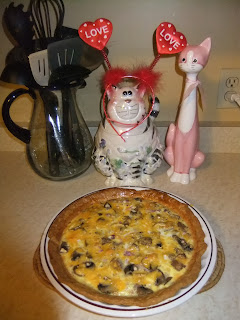 Thank goodness for easy and quick meals that are also nutritious.
Speaking of Supper, I suppose that is something I should think about making myself, as the time is now getting past the hour of 7:00 pm, "Just North of Wiarton & South of the Checkerboard".
Posted by Cindy@NorthofWiarton at 2/14/2012 07:05:00 pm