Goodbye Ruby Tuesday, Still I Am Gonna Miss You

*Phew*  it feels good to sit down after a whole day of doing nothing cleaning the house, does it not?  I feel like I have barely sat down since I got up just after 5 am this morning.  I have to admit, I have sat down to take breaks, when at the same time I take advantage by updating my Recipe Exchange.

What was I doing awake at 5am?  it happens to be my "most usual" time to be awake every morning.

What was I doing just before 6:00 am.?  Talking to my son, Paul, on the phone while he was on his way to work.  LOL, he or I can almost guarantee we have each other to talk to this early in the mornings.  Another one up and out early is my niece, Joanne, as she is walking Pixi before she gets ready for work.


"This would be my Doggie Niece, Pixi.  Pixi doesn't like getting up and going out much, so I am told, as apparently she isn't only "big", she be a lazy girl too.  You can tell she be lazy by this picture with her tongue hanging out and she hadn't even walked a few yards, this I am sure off.  Lazy girl she be, that Pixi Girl." 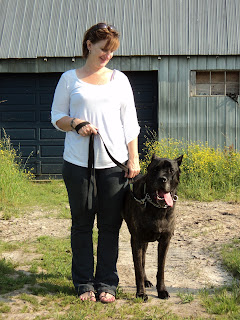 LOL, I can imagine my niece, Joanne, gets more exercise trying to convince Pixi to go out for a walk !

I folded up the last of the laundry I had done yesterday, and got that all put away once Rob had gotten out of bed and I had that all made up.  Now that our bedroom has been decluttered, it gave me two extra shelves so I took advantage of putting one to good use ....


"Is it ever nice to have the bedding in each room along with the bed it goes with.  Two extra sets of bedding doesn't even take up a whole shelf !  I love opening up and looking into the bedroom closets now; they are so organized !" 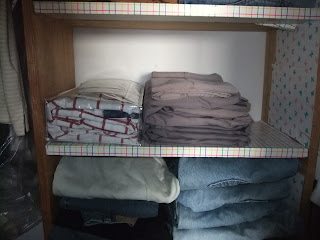 This week we are back to our "normal" routine again of the past several months, since the other chap is back from Holidays, my "Crabby Cabbie" is back to his usual shift.  This means our mealtime is back to having our Dinner at the noon hour.  *Sigh*   I hope some day I will get used to my days being turned around .... in the meantime I did a Pork Loin Roast in the Marinade that was February's Recipe of the Month on Cindy's Recipe Exchange on Facebook.  The recipe for the Balsamic-Garlic Crusted Pork Tenderloin can be found here. 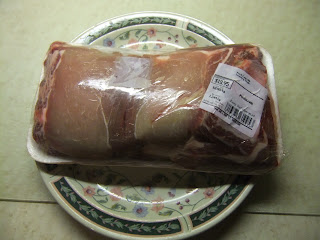 "An "oh so easy" marinade consisting of Balsamic Vinegar, Minced Garlic, Coarse Salt (I use Sea Salt) and Olive Oil.  All placed in a heavy duty zip lock bag with the "choice" of  Pork loin and left to marinade in the fridge over night." 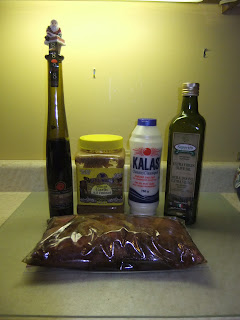 "I preheated the oven to 400*F while searing the marinaded meat for approximately 4 minutes." 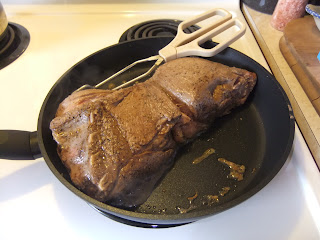 "This portion of Pork Rib Loin took approximately one hour to cook .  It was done to perfection, tender and full of flavor." 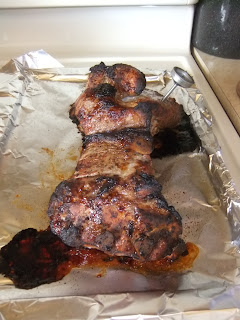 I also had a hankering to make a Black Bean and Feta Salad for a couple of our meals this week.  I got going on making that this morning as well. 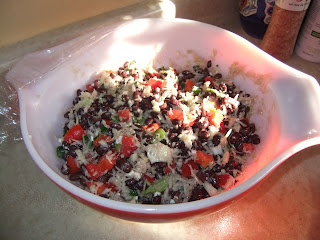 "I love this salad, and it is also rich with "fibre". 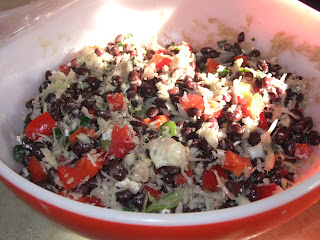 The recipe for this salad can be found here.  (Just "click" on the highlighted words, as they take you to the referred website)


"This salad recipe calls for 1/2 cup of fresh Lemon Juice.  A couple of weeks ago I was able to purchase a small Betty Crocker Juicer at the local Salvation Army for $5.00.  Let me tell you it worked lickety split on getting that Lemon Juice for me !  $5.00 well spent on this Kitchen Gadget." 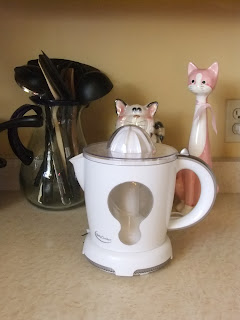 I must give my Rob credit, which I didn't do yesterday, as he had been busy with his toy tractor pushing snow out of our driveway, the reason we had to go buy hydraulic oil for it on Sunday. 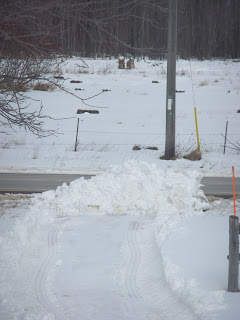 "Yes Sirree, he was pushing snow alright, so much it must have tuckered the poor boy right out as he most certainly was "sawing logs" pretty early last night." 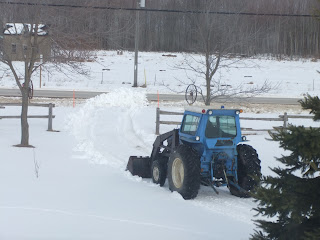 It has been a beautiful Sun filled day here today.  Actually a bit more on the mild side with the snow having "shrunk" a little bit.  I am not going to "hold my breath" yet though, as I heard we are to get more of the "fluffy" stuff by week end.  It's not over til the "Fat Snowman" sings, or would that be melts, is it?

Tomorrow I have to hit the books.  That would be "bookkeeping" I am afraid to say, as I am behind with January and February right on my heels yet to be done, with being sick in January and all the decluttering I was doing in February.  *Sigh*   This is why I was so "gun ho" today to get the living/dining room areas vacuumed and dusted.  I still would "like" to do the foyer and the bathroom today; but I will see if my weary body still has enough "spit & fire" left in it to be getting those areas done, once I have finished up here.

It has been a very busy Tuesday, and I am weary but ..... Goodbye Ruby Tuesday ... still I am gonna miss you.


I can never say enough how much I appreciate the people who have joined on the right side bar as Followers of my "Blog", as well as the comments being left when time or topic of interest permits.  I really do look forward to the comments, as well as the emails, as I find them all encouraging to keep me "blogging".  Thank you.

At the moment, I am going to take myself out into my Kitchen to make myself a cup of Java, so I can first infuse my body with a little bit of caffeine, then decide if I do have any "spit & fire" left in these weary bones to carry on further, "Just North of Wiarton & South of the Checkerboard".
Posted by Cindy@NorthofWiarton at 2/28/2012 05:15:00 pm