A Day Hanging Out With The Hubby

Sunday finally arrived with my dear "Crabby Cabbie" having a day "off".  Of course I had let him sleep until at least 10 am, then giving Mercedes the "go ahead" to go in and pounce on him .... no I didn't, but apparently she had jumped up and pounced on him once, lol.

It really hasn't been too much an exciting day, other then I found a new home for some of the sheet sets I was disregarding, as I had heard of a young girl who had just gotten her very first place who was in need of "everything".  Once Rob had gotten up and mobile, we dropped some of these to where the girl was going to get them, then the rest off to the bin at the Salvation Army.

Rob treated us to a Tim Horton's coffee, before we headed down towards Southampton to go fill up with gas at the Saugeen Gas Bar.  I was pretty "ticked" off with myself, as it was a sunshiny beautiful day and I had, once again, left my camera at home.

It was well onto the hour of 2:00 pm with either of us having had breakfast or lunch.  Rob swung into the Smokin' Gun Restaurant located between Sauble Beach and the Sauble River for some lunch.  Rob had a single piece of fish 'n chips, and I had an open face Ruben Sandwich with Fries (something I have very seldom is fries).  Um good both our lunches were .... and service was great, as we had been the only two people in there at that time.

Here we are back at home, both exhausted.  Rob from putting in so many hours at work, and I from overdoing things the past two days.  I am sure it will be an early night for both of us.

A friend on Facebook shared a YouTube video this morning to her page.  Let me tell you, it was the best "belly laugh" I have had this week, not to mention how much I also enjoyed the "catchy" tune.  I loved it so much, I have to share .....

Tomorrow is "Family Day", a statutory holiday.  I am hoping this means "all" the stores are closed, including the Beer and Liquor Stores, as I am thinking then my "Crabby Cabbie" can stay right here at home to have a little holiday himself by helping me get some things needing done around the house.  It really would be a holiday from his "norm", would it not?

It is so nice to have all the bags of bedding I had from decluttering removed this morning ..... 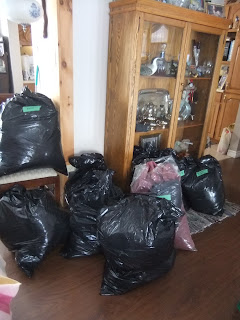 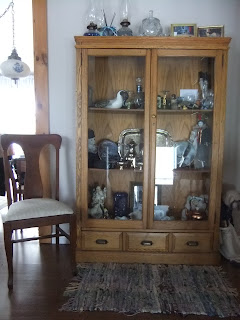 With all the clutter that had been layed out all over the spare bedroom, going back to ....


"... me being able to leave the door open to this now, and not the mess what had been there." 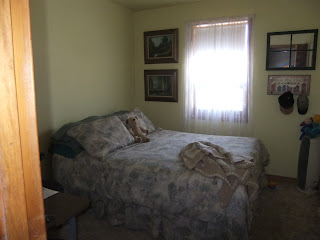 Week 3:  Productivity Week of the Declutter Challenge is now under my belt with Week 4:  The Dreaded Challenge, photos coming will be appearing within a day or two ..... *sigh*.  I hope I can accomplish what I have planned for Week 4.

I am also pleased to say that Cindy's Recipe Exchange on Facebook is now up to 141 members as of this past weekend.  It has been and is lots of fun between myself and other members.  The past couple of days  between all the comments on the subject of "salt", I believe the majority has concluded that Himalayan Salt is the healthiest of any to be using.  Here is a link to Dr. Mercola explaining the benefits and facts pertaining to Himalayan Salts, should anyone be interested.

I think I am going to seek it out to buy and give it a try, as there are a few Recipe Exchange members who have said they use "nothing but Himalayan Salt".  One member did state, go easy on it as the first time she used it as she would have regular salt, and had to replace her plate of food, as it was too much !

I find myself, once again, feeling very weary, so I think I will be signing off for now before my half mast eyes are completely closed here, "Just North of Wiarton & South of the Checkerboard".
Posted by Cindy@NorthofWiarton at 2/19/2012 05:20:00 pm