I Get The Feeling I AM Going In Reverse All The Time Lately?

Wowsers ! .... that was quite the thunder "banger" and lightning show Bruce County got last night !  Not sure about everywhere else but reports from over Oliphant and Southampton ways certainly got it as much as we did here.

I went to take Lexus and Bandit out just before 9:00 p.m., and nope they just stood there and wanted back in .... at that time it the thunder was just starting to roll in from the West, with the rain hitting not too long after.  Good thing Rob let them out when he got home, otherwise I think I would be greeted by two Aussies crossing their legs in agony this morning !  LOL

I had one of those "non-stop" doing something all day, but not really feeling I was accomplishing anything kind of days.  *Sigh* and felt completely worn out by the whole day !

I am finding it to be "quite the challenge" changing the way I have scheduled my days (or attempted to, to say the very least) from the past couple of years, to now accommodating  the preparation of a Dinner at the lunchtime hour.  Not that I mind, it is just a whole life change by having to change my way of thinking and planning.  I am the type of person who thinks ahead to the next day or two, on what I am going to make for a meal .... I like having it in "stone" in my head on what I am going to do .... lol, that small bit of organization in my life must give my brain a "calming" effect.

Anyhow, yesterday it felt like I was preparing food the whole day long.....and not getting anything else accomplished.

Once I had gotten my morning going with first by putting the Pork Ribs in the slow cooker, then going out into the garden to retrieve onions, beets, dill, and chives.  Next was preparing the Barbecue Sauce .... a little chopping and mixing went on there, and then some heating of same.  Beets and potatoes needed then to be scrubbed and put into a pot to be boiled.  By the time all was said and done, we managed to sit down and eat around the 1 o'clock hour.

Now mind you, inbetween all of this there was the making of our bed, general cleaning up of the kitchen, setting the table, oh yes and the "picture" taking !  Time does seem to fly, for loss of a better cliche ....

"It began by retrieving the Slow Cooker Ribs recipe from "Cindy's Recipe Exchange", on the laptop, since I didn't have the method for the sauce printed off." 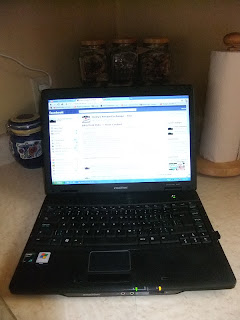 "To the finished product of a Slow Cooker full of saucy ribs." 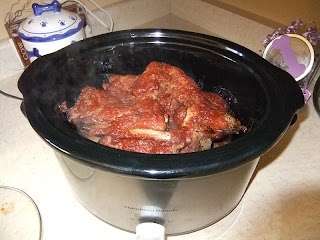 "Ending with a very enjoyable 10*Star Dinner served up with garden fresh veggies." 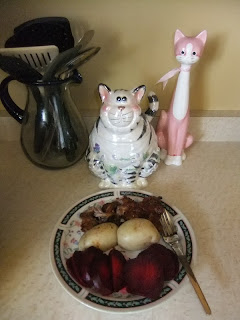 Then comes the cleanup, onto the loading the dishwasher, and then trying not to "stick" to the kitchen floor where I must have had a couple of "oops" moments.  After that was all done,  not much later going back out into the kitchen to find Rob had made his lunch leaving the counter in another "mess" to be cleaned up.... um, how does that happen my dear "Crabby Cabbie"?  ...and he wonders how I turn into a "Mrs. Crabby Cabbie" some days ..... LOL !!!

*Sigh* I took a half hour out for myself before I got going on making a potato salad from the leftover dinnertime potatoes, oh yes, I forgot I had boiled eggs for the salad that morning as well, but no big deal, right?

"Here it gets started from the beginning ...." 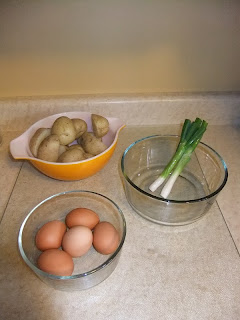 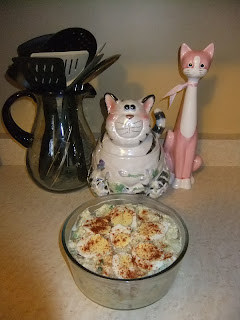 Ha, ha, ha, looks so simple in the pictures .... good thing I don't include pictures of all the "mess" inbetween the beginning and end !  With that out of the way for the next day, I took myself outside to enjoy the lovely day we ended up having to have some fun with Bandit and Lexus, and get myself some much needed fresh air.

I see myself as being a very "frugal" person, or as Rob would call me "cheap", so I waited until the hydro rates were down at 7:00 p.m. before I started the dishwasher and began the making of 2 dozen Zucchini Muffins.  By the time all the chopping and mixing was done, and they came out of the oven, I am sure it was close to 8:30 p.m..

"The Zucchini Muffin Recipe from my Muffin Mania book is one of the best I have ever made; um mm moist and tasty." 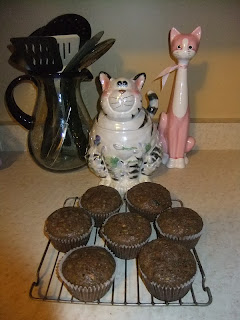 I finally had my "shower", and went to bed to relax for the rest of the evening.  I don't remember what I was watching on TV, only that it was about 12:30 a.m. when my Crabby Cabbie returned back home ....guess I missed out on whatever I was watching.

*Sigh* that was "my day in reverse" on how I am usually used to doing things, but I am sure I will get used to it somehow or another, and overcome the challenge of it all, as that is just the way it is.

When I did manage to read a couple of my emails inbetween everything else yesterday,  I loved the one I received about "cucumber uses", some I have heard before and others I have not:


1. Cucumbers contain most of the vitamins you need

every day, just one cucumber contains Vitamin
B1, Vitamin B2, Vitamin B3, Vitamin B5, Vitamin
B6, Folic Acid, Vitamin C, Calcium, Iron,
Magnesium, Phosphorus, Potassium and
Zinc.
2. Feeling tired in the afternoon, put down the caffeinated soda and pick up a cucumber. Cucumbers are a good source of B
Vitamins and Carbohydrates that can provide that quick pick-me-up that can last for hours.
3. Tired of your bathroom mirror fogging up after a shower? Try rubbing a cucumber slice along the mirror, it will eliminate the fog and provide a soothing, spa-like fragrance.
4. Are grubs and slugs ruining your planting beds? Place a few
slices in a small pie tin and your garden will be free of pests all season long. The chemicals in the cucumber react with the aluminum to give off a scent undetectable to humans but drive
garden pests crazy and make them flee the area.
5. Looking for a fast and easy way to remove cellulite before
going out or to the pool? Try rubbing a slice or two of cucumbers along your problem area for a few minutes, the phytochemicals in the cucumber cause the collagen in your skin to tighten,
firming up the outer layer and reducing the visibility of cellulite. Works great on wrinkles too!!!
6. Want to avoid a hangover or terrible headache? Eat a few cucumber slices before going to bed and wake up refreshed and
headache free. Cucumbers contain enough sugar, B vitamins and electrolytes to replenish essential nutrients the body lost, keeping everything in equilibrium, avoiding both a hangover and headache!!
7. Looking to fight off that afternoon or evening snacking binge? Cucumbers have been used for centuries and often used by
European trappers, traders and explores for quick meals to thwart off starvation.
8. Have an important meeting or job interview and you realize that you don't have enough time to polish your shoes? Rub a freshly cut cucumber over the shoe, its chemicals will provide a
quick and durable shine that not only looks great but also repels
water.
9. Out of WD 40 and need to fix a squeaky hinge? Take a
cucumber slice and rub it along the problematic hinge, and voila, the squeak is gone!
10. Stressed out and don't have time for a massage, facial or visit to the spa? Cut up an entire cucumber and place it in a boiling pot of water, the chemicals and nutrients from the cucumber
will react with the boiling water and be released in the steam, creating a soothing, relaxing aroma that has been shown to reduce stress in new mothers and college students during final exams.
11. Just finish a business lunch and realize you don't have gum or mints? Take a slice of cucumber and press it to the roof of your mouth with your tongue for 30 seconds to eliminate bad breath, the phytochemcials will kill the bacteria in your mouth responsible for causing bad breath.
12. Looking for a 'green' way to clean your faucets, sinks or stainless steel? Take a slice of cucumber and rub it on the
surface you want to clean, not only will it remove years of tarnish and bring back the shine, but is won't leave streaks and won't harm you fingers or fingernails while you clean.
13. Using a pen and made a mistake? Take the outside of the
cucumber and slowly use it to erase the pen writing, also works great on crayons and markers that the kids have used to decorate the walls!!

I know it was a little long, but I can't email it to everyone and I wanted to "share", as I do love sharing ..... lol, and thanks to Zolton

Things to do and people to see today, so I had best be checking the Wiarton Airport's weather report for the day and get on with it.

I think it is going to turn out to be an "okay" kind of weather day, as it must have rained itself out last night.

Here I go off and not really running into my kitchen for that very much needed 2nd cup of Java, "Just North of Wiarton & South of the Checkerboard".
Posted by Cindy@NorthofWiarton at 9/22/2011 07:49:00 am