I Am Sure "Twittering" of the Heart is Healthy?

*Sigh*, here I go again with the sighing, as I sit here wondering where to begin....well I suppose I just begun my morning with waking up to hearing the rain come down thinking what a pleasant sound it is, then making my way into the kitchen to reheat a Tim Horton's coffee my Crabby Cabbie so thoughtfully brought home to me last night, and ending up here sighing....lol.

Okay that is my moment, so I had best not get to ahead of myself and go back to my yesterday.

I had a VON Caregiver Support Circle meeting yesterday afternoon, which I had told them I would bring along some Blueberry Zucchini Bread.  I did manage to remember to take that out of the freezer at 4:00 a.m., thank goodness, or I would have been so embarrassed not showing up with even a tidbit of something.

Wow, I must not have not done anything too exciting yesterday morning, if taking the bread out of the freezer is the only thing that is coming to my mind....."jiggle, jiggle", oh yes, I did make my bed, tidy the kitchen, make my usual phone calls, and most importantly had a shower.  LOL, I am just laughing thinking about how many times my sister, Jeanne, and I have spoken on the phone together, laughing and saying to each other, "I haven't had my shower yet; good thing we don't have  "smell a phone" !  Ha,ha,ha......many times I am sure.

After my shower, it was nearing the noon hour, so I thought I should make something to eat hold me over.  With sandwich and coffee in hand, I sat myself down beside Rob, in his lazy chair, to have my lunch and check my emails.  Well, here I go with the heart twittering again, before I barely get started with this, lol.....okay, excitement in check so on with the show !

I opened my emails to find an email from one, Gem Webb, who is our very one and only "Web Content Developer" for Explore the Bruce, located here in Wiarton, with the subject line being "Your blog post is gonna get serious exposure now!"  Not having any idea why I am receiving an email message from Gem Webb, I venture even further then the subject line to opening this email.....to find the following message:

I have officially added all your blog posts to go out through the 11000 twitter account every time you write a post. Please be politically correct for our audience or let me know if you want to be removed.

I just think your content is great and your work should get exposure.

Fun, interesting and original thought deserves credit in my books. Keep up the great work. Looking forward to following your seasonal posts and photos!

Please give our website http://www.explorethebruce.com inbound links on good keywords to specific pages on our website around activities if you could also ( it just means highlighting a word when you write and making a link to a page on our website). Thanks so much!


"Content is great and work should get exposure" jumped right out at me, but 11000 twitter account?  I really wasn't capturing the meaning of that so much.  However I was having a most difficult time containing my excitement that my little daily blog had captured Gem's attention.

I could not contain my excitement any longer and had to call my most immediate family members, with my nephew, Jay, being one of the first, since he had originally found Google Blogger for me and told me how to get started.  Jay was not only excited for me, but he also had to explain what the "11000 twitter account" part of Gem's email meant to me.....I am actually now sitting here having quite the "belly laugh" over that one.

For some of us that don't know what "twitter" is, I googled it for a definition:

Twitter is an online social networking and microblogging service that enables its users to send and read text-based posts of up to 140 characters, informally known as "tweets."

Twitter was created in March 2006 by Jack Dorsey and launched in July of that year. Twitter rapidly gained worldwide popularity, with 200 million users as of 2011,[6] generating over 200 million tweets and handling over 1.6 billion search queries per day.[3][8][9] It is sometimes described as the "SMS of the Internet."[10]

Twitter Inc., the company that operates the service and associated website, is based in San Francisco, California, with additional servers and offices in San Antonio, Texas, Boston, Massachusetts, and New York, New York.

Any further inquiries regarding Twitter, please direct them to that Jack Dorsey guy, cause this Bruce County gal doesn't have a clue.....lol.

I was so honoured and excited about Gem's email, when I called my son, Paul, who said to me, "are you crying, Mom?", well, "Let me tell the World", I was that excited I was actually crying....lol.  "Shh, now don't be telling anyone that I was crying, Paul !"

With only minutes to go, I had to put all my "twittering" excitement aside and head out to my VON Caregiver Support Circle get together for 1:30 p.m..

I made it to my meeting destination in record time, with a few minutes to spare.  I also remembered to take along the Zucchini Blueberry bread I had promised.  Good thing as I had forgotten to eat my other half of sandwich once I had opened Gem's email....lol.

My Caregiver Support Circle meeting went absolutely wonderful.  Even with my Mother, now placed in a Nursing home, and no longer living here with Rob and I, I still find the emotional understanding and support to be good for my soul, especially now since I have been feeling so helpless with my sister in a hospital in Nfld, so far away from us with a phone being our only means of contact.  Now that I am typing that, I think how blessed we are with at least being able to communicate with each other daily by phone, and that she is able to communicate.  Yes, I had best be counting up all my blessings on those accounts.

I can testify myself that I came away from attending such a Caregiver Series with feelings of relief, more knowledge and understanding of  all the feelings and emotions, I had been experiencing from being a Caregiver with my own Mother living with us for over four years.  I had received solid information, understanding and compassion from the VON staff who held the series I had attended this past Spring.

VON Canada (Victorian Order of Nurses) is Canada's largest, national, not-for-profit, charitable home and community care organization.  Wow, how would you like to have that "feather" in your cap?

That certainly was a mouthful, glad I only had to type it, as I certainly wouldn't had been able to say it all that clearly !

After the meeting, I had some flyers in hand to place around and about town at various business locations to advertise the VON's upcoming Caregiver Series.  I dropped into the Wiarton Library to post on their bullentin board.  Since this is also where the Explore the Bruce office is located, I thought I would check see if Gem was in his office.  Much to my delight, he was, and I was able to give my thanks in person, for him causing my "heart to twitter" so.

Gem and I had a most "delightful" visit with each other, it was a really nice and comfortable plateau that I, for one, enjoyed being on.  Bruce County should be so proud to have such a energetic, creative, resourceful, and much, much more, kind of person then Gem Webb at the helm of "Explore the Bruce".

You might notice, there is a "brand new" gadget on the sideline of my blog, where you can now Subcribe by Email to my blog, compliments of Gem's kind assistence.

I am actually thinking, I should be backtracking a bit with a little History about the couple of times I had met Gem in person prior to this day.

First off, I follow "Explore the Bruce" on my Facebook page.  Back in the Spring when the Stoke's Bay General Store was having their Friday the 13th 2nd Annual get-to-gether, I contacted Gem asking if he could promote it on the Explore the Bruce Up and Coming Events Calendar, which I had previously suggested to Explore the Bruce such a calendar be made available around the time of the School's March Break.  The next time was when there had been a Facebook Explore the Bruce posting that there were Motorcycle stickers available at their office, so Rob and I went in to pickup a pair for our Honda, and then again met personally with Gem.

So those were my first "adventures" with Explore the Bruce's very own, Gem Webb, and I am hoping we have many more "adventures" together in days ahead.

Now how else would one like to end such a "perfect" day?  After supper, Rob and I took the dogs out, one at a time for playtime, while Rob fed and water the chickens..... 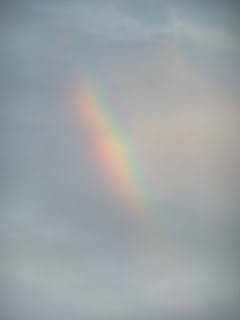 Today is another brand new day ahead, and by the sounds of the rain coming down outside my window, it will be a "catchup" with the inside work kind of day here (not that there isn't always lots to catching up to be done).  Even though I do hear the rain, I best be checking out what the Wiarton Airport has to say about the remainder of my day.

Ummm, think I will remain most of my day indoors.

I best be getting back down off my "Cloud 9", as there is a reality check sitting on my kitchen counter that will be requiring my attention sometime today....

"Peach pie, peach cake, peach cobbler...so many to choose from...." 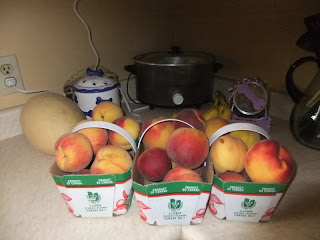 Look at that time?  8:00 a.m. already, and I have barely had a second cup of Java, so here I go, off and running, once again, "Just North of Wiarton & South of the Checkerboard".