Before I begin with my yesterday, I would like to begin with today, September 11th, 2011, which marks the 10 year Anniversary of our neighbours and friend's loss, south of the Border, on the day that is known as 911.

I have taken a moment in prayer for those families who will be scarred for life from the events of the 911 tragedy.  God please give them the courage and strength to continue on to live a full and complete life from here on, despite the horrors they have had to endure.  Amen.

So my yesterday began with the preparation of dinner for my "Crabby Cabbie", since I did have leftover venison roast and gravy, and Rob had requested a Shepherd's Pie, which was easy enough for me to throw together. 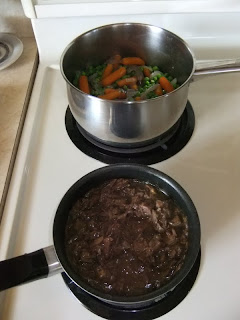 "New potatoes boiled mashed and whipped with a little cream and Herb & Garlic Cream Cheese (thought I would try something different then plain milk)." 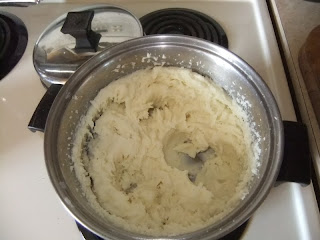 "All ready to have the potatoes spread over top." 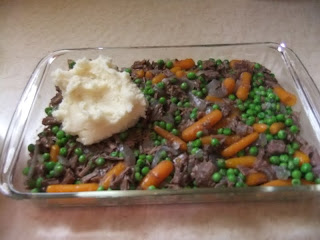 "Now ready to be popped in the preheated 350*F oven for 1/2 hour or so, until heated thoroughly." 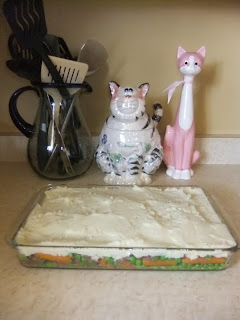 "Rob and I really enjoyed the Shepherd's Pie, along with the fresh sliced field tomatoes." 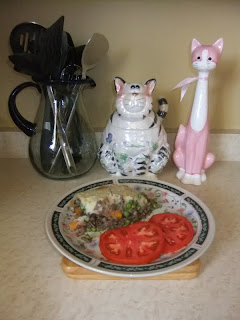 I had been busying myself all day with the bushel of tomatoes I needed to tackle, from washing them, to blanching and peeling, cutting them into pieces, then ending it all by canning them.  It took me sometime from start to finish, with lots of breaks inbetween, as I was beginning to think my back and neck were to give out.....but I now have 1/2 a bushel done under my belt.

"It took me some time to get to this stage, between all the prep and breaks I need to take...." 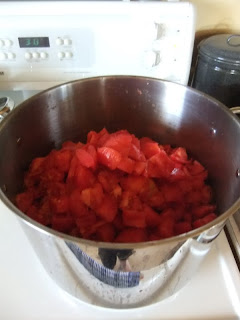 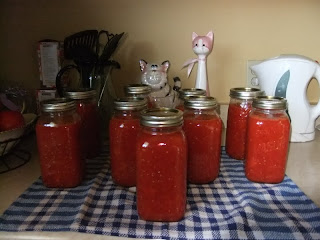 LOL, I should have taken a picture of the "mess" in my kitchen that was there to cleanup after all was said and done !

I had just gotten the mess in my kitchen cleaned up, with my shower done and over with, when I got the "phone call" that my most favorite two "Riptail Snorters", Aiden and Connor, had arrived in town, and could I meet up with them downtown so we could pick up wieners and buns for supper.

"Arriving back home, I had two Riptail Snorters totally amazed over the chickens!" 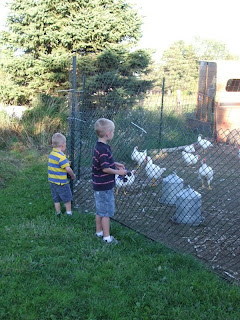 "Riptail Snorter No 1, Aiden, had lost his very first tooth & we were going to have the Tooth Fairy visit our house that very night !  Does it get any more exciting?" 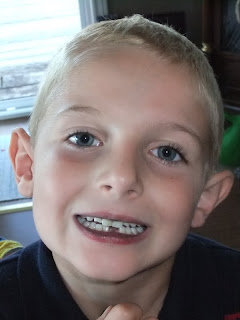 After our supper of hot dogs, we had to go to Southampton, as Poppa had forgotten the ear piece for his Cell Phone, and he certainly needed that!  So off we went to the designated meeting spot down at Southampton's Cenotaph (you will be amazed should you click on Southampton's cenotaph).

"This pond has been here as long as I can remember;  I can remember my Dad giving me coins to wish upon in years gone by, so how nice to see my Grandsons were having the same experience." 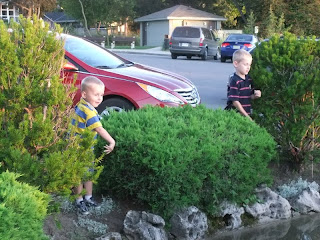 "Of course the three tiered water fountain was spied right off the bat!  Now this is how it is done.....lol.  Aiden is doing a very good job by turning that water tap." 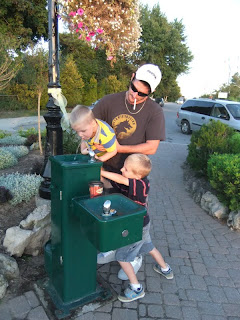 "The boys were amazed at the vastness of  Southampton's beach and Lake Huron itself." 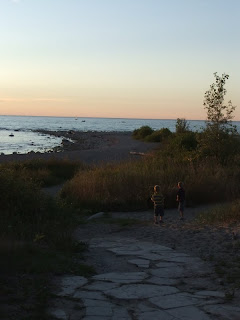 "I thought it was great to run into friends, Archie and Debbie (Martin) Indoe, that I had grown up with, while we were there." 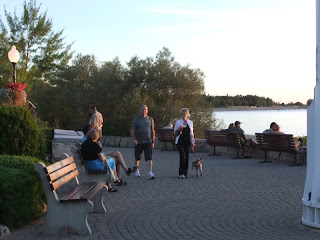 "Then there was the amazing display of the sun setting over Lake Huron that draws people to Southampton.   I personally consider Southampton to have one of the best sunsets  I have ever set eyes on in my lifetime." 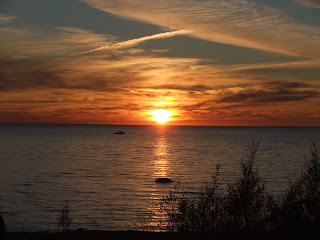 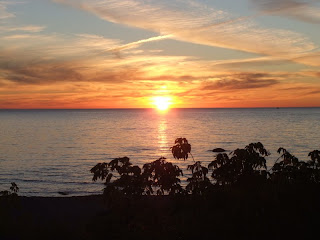 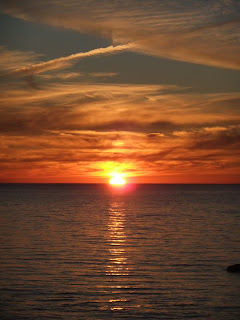 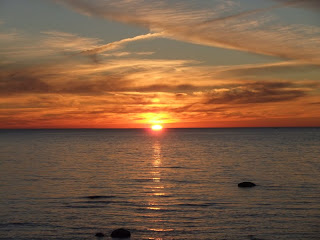 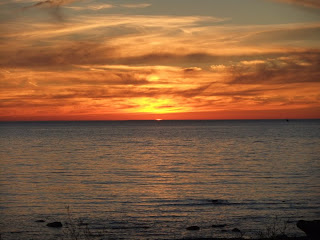 "Before it got too dark, there was still time for some "playtime"." 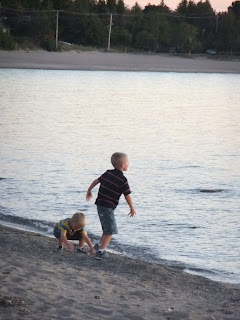 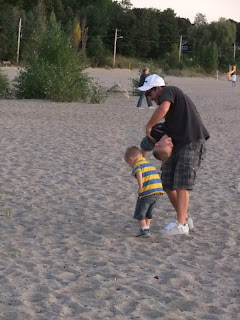 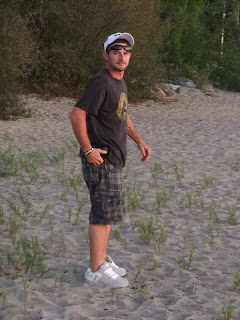 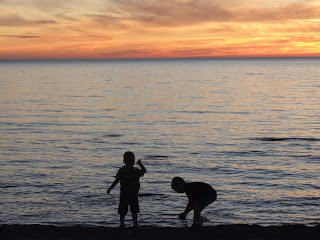 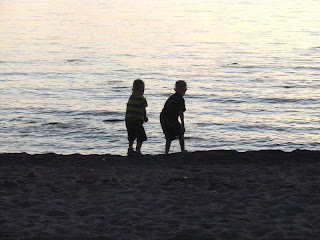 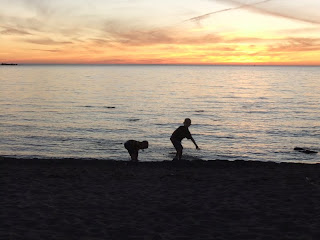 In between all the picture taking and fun we were all having, we did see Poppa, aka Dad, Rob and the "Crabby Cabbie", and gave him his telephone ear piece, as well as having a little visit with him in between his work calls.
"Once we got back home, it was time to set up camp in Grandma & Poppa's livingroom, as Aiden had received a new sleeping bag from his Birthday Party he had Friday, and it just had to be tried out !"﻿ 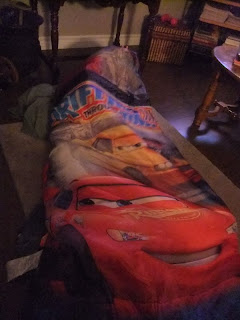 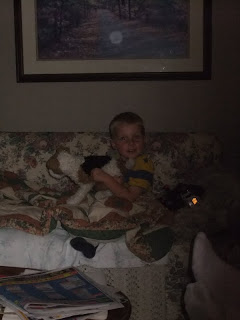 "Not only was my livingroom taken over, but my laptop and chair as well.  Boys will be boys !"﻿ 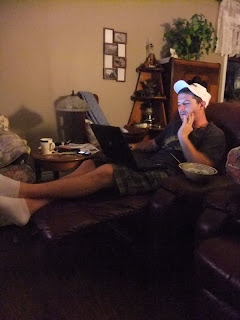 After I thought everyone was settled in for the evening, I took myself to bed as well, and am sure I was fast asleep not long after my head had "hit the pillow".
Time to check out Wiarton's Airport Weather report to see if the weather is going to cooperate for us to go to Bluewater Park today.
Today:
Sunny this morning then a mix of sun and cloud with 30 percent chance of showers this afternoon. High 25. UV index 6 or high.
Tonight:
Partly cloudy. 30 percent chance of showers. Low 16.
I think we will able to manage to get some park time in before the threat of showers arrives this afternoon.
I have a feeling I am going to have another busy day ahead of me, before my Riptail Snorters head back to their own home, and I find myself and Rob by ourselves once again, "Just North of Wiarton & South of the Checkerboard".
Posted by Cindy@NorthofWiarton at 9/11/2011 09:25:00 am