Another Day Gone To The Dogs !

My cousin, Suzanne, wanted to go to the Keady Market yesterday morning, as she hadn't been for sometime, so I told her I would go along for the ride....well along for the ride I did go, but we didn't leave until 10:00 a.m..  In days long past I had been quite the Market goer, living just minutes from the famous St. Jacob's/Waterloo and Kitchener Markets, my idea of going to Market was leaving no later then 6:00 a.m., and returning back home by 8:30 or 9:00 a.m..

Not only did we go to the Keady Market, we went on a quite the adventure getting there ..... as we had missed our turn and carried on into Scone, since we had been probably talking a mile a minute I am sure, since I had been curious on how Suzanne  had made out when she went on a hike, last Friday, for 6 hours along the Bruce Trail up by Tobermory, and she was telling me how well she did and what a "fantastic" time it was.

There are lots of perfect and interesting places to hike on the Bruce Peninsula....so no wonder she had such a great time on the hike.

"It all began when we were "greeted" by the dog.  What a sweetie she was I might add." 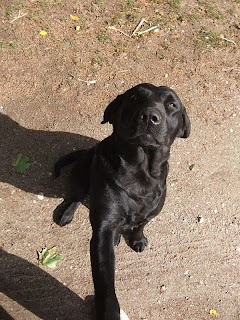 "One of my most favorite stops is this vegetable stand in Scone....the corn here was so sweet." 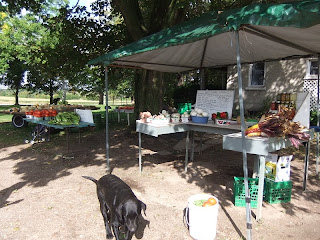 "Suzanne needed eggs, so here she made the purchase along with one pretty big sweet onion." 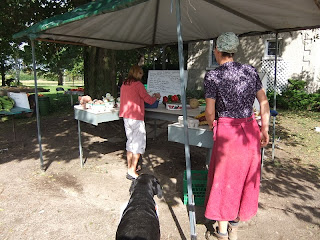 We left there and carried on thinking if we went from Scone along the top road, with the hope we would come to the crossroad that would take us to Keady.....we did make it to Grey Road 3 which we turned down onto where Suzanne spied a sign that said "Puppys For Sale".  Turn around we did.....

"Indeed there were puppies for sale, and the cutest laid back puppies going....Golden Retriever/Pyrenees cross they are." 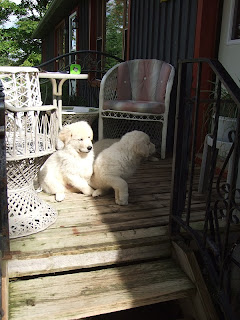 "Suzanne was really quite taken by the three of them....as I was too, but someone had to take the pictures, and besides I have and love my "Checkerboard Aussies"." 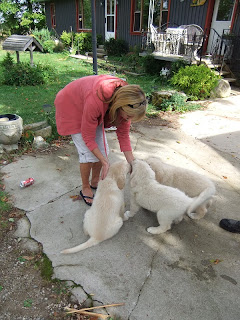 ﻿
"The man even guaranteed they were house trained, as this little guy demonstrated for us, after just arriving outside."﻿ 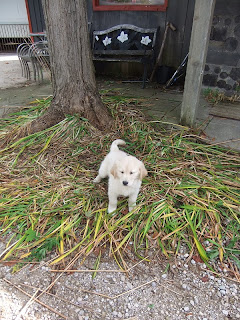 "The original homestead was on still on the property when the puppy owners had first moved there, which I thought was of an interesting structure you rarely see anymore." 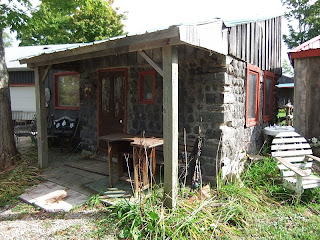 ﻿
Before we took our leave, the puppy owner assured us the Keady Market was only 15-20 minutes further up the road.  I didn't have a problem not knowing where the Market was, I had a problem with Suzanne's gas "warning" light was on !!!!  LOL, I can imagine the story I would be now weaving if  we had ran out of gas?????

We eventually did make it to the Market, where I made a beeline for the small animal barn, as that is where I definitely knew there a washroom located.  As I was waiting for Suzanne to have her turn at the washroom, I took in some of the sights surrounding me....

"This little piggie went to Market....." 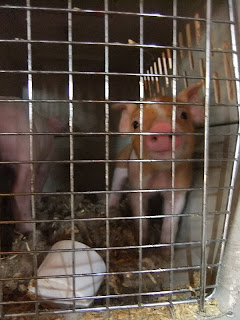 "...and there is certainly enough Christmas Geese all together, not by their choice, here." 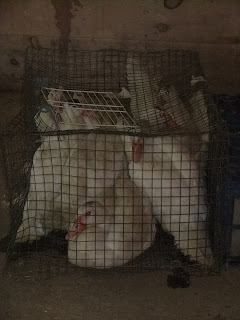 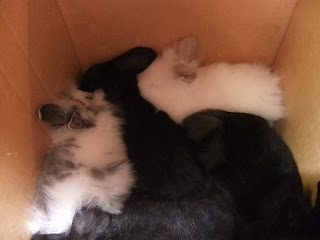 "This gentleman was transferring the three geese he had purchased into his own crate." 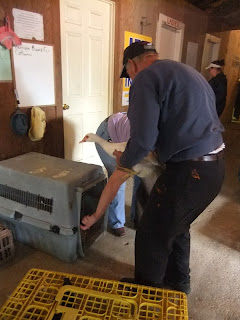 "He informed me this one was pretty skinny for the pot, and that they were purchased to go along with his chickens to their "demise" the very next day." 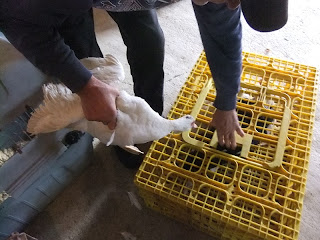 "These were Christmas Geese indeed, from what I gathered from the gest of the conversation...." 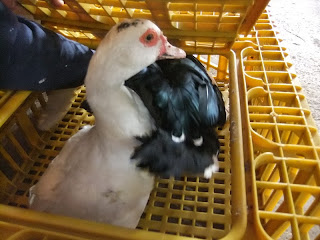 "Suzanne loves cows, so into the sales barn we went." 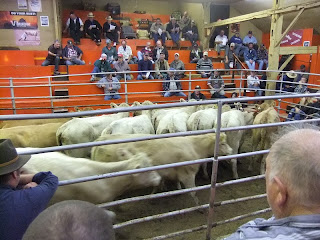 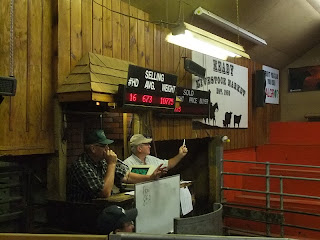 "We made it back out to the open air and took in the all the sights as we walked around the Market." 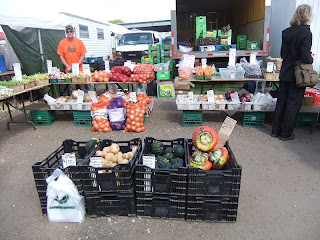 "I would never have thought to have seen our friend, Ralphy, at the Keady Market this late in the day....but "plain" as day, here's ....... Ralphy !!!  and Bob.  Taking advantage of the perfect day out and about on their motorcycles." 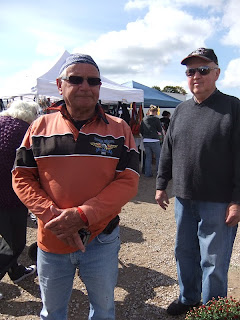 Further along in our travels, Suzanne stopped to get some information from a gal representing and selling Norwex products (environmental friendly), who are known Worldwide.  Doing what I do best, we got to talking and this gal lives in Calgary, but is a Bruce County gal, from Port Elgin !!!  ....and was only 2 years ahead of me in High School....imagine that, maybe that is why she looked so familiar to me?  LOL.

"Mary Jean has some pretty great products,, and is planning to move back to Bruce County, but in the meantime purchases and information can be obtained from her website at  www.mjbelrose.norewex.biz ." 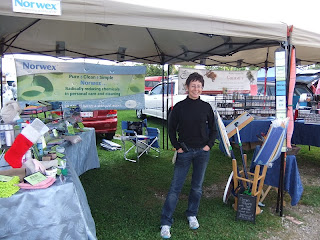 "...and here is "Kenny", a professed Medicine Man for many years from Canada's Western provinces, where the products he represents can be found by clicking on this website:  http://www.stoppainfastonline.com/?ai=2 .  I purchased some "Miracle Mist Spray" from him, so I will see how that works for Rob & I." 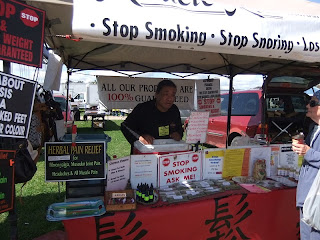 Suzanne and I called it a day and head off to the closest gas station in the area, which just happened to be Mennonite Corners, a few kilometers away from the Market, but we made it there, or as I had stated earlier, this story would have had a totally different "twist" to it.....lol.

We made one more stop in Hepworth at the Apple Vendor there for Suz to get a basket of  Crab apples, and then headed back to my home "Just North of Wiarton & South of the Checkerboard", arriving there just before 3:00 p.m..  I did manage to get a load of laundry hung out on the line, Bandit and Lexus out for their runs, and a peanut butter sandwich into me, before I sunk myself into a chair, as I was "bushed".

"After supper, our friend Dean, came by to pick up another load of hay." 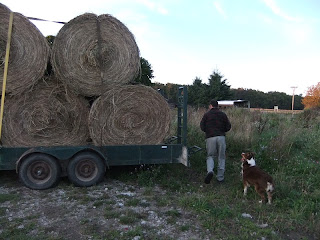 "Lexus, of course, had to be right involved with what was going on."﻿ 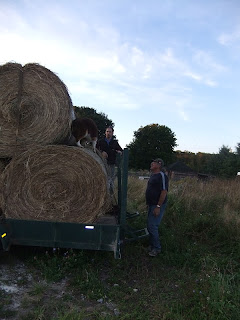 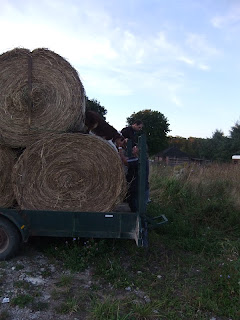 "I think Rob was telling Lexus how to go up one more bale....lol." 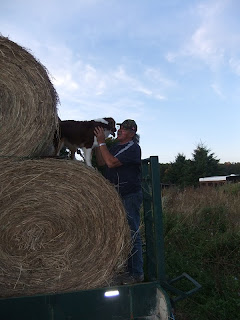 "Our "Checkerboard Aussie" was just pretty proud to be on the bale she was by the looks of her." 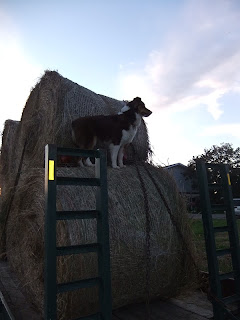 "...and there is Dean's truck/trailer, all loaded and ready to go down the road." 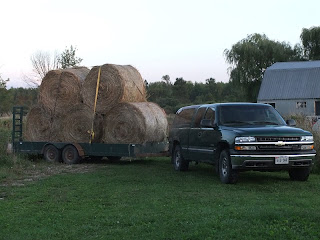 That was my yesterday, beginning with dogs, and ending with dogs....it was just another "doggone" day !!!  ...and I am tired this morning, as it was a very big "adventure" for me, so if there is a problem with spelling, or grammar, or whatever else my weary mind could not grasp....so be it ! LOL

I certainly hope my laundry drys today, as I never did get it off the line last night....best be checking that weather situation out.

Looks like the laundry will be alright for this morning at least.


I hope I have a more productive "adventure" at home today, as there is certainly never a lack of things to be done here, "Just North of Wiarton & South of the Checkerboard".
Posted by Cindy@NorthofWiarton at 9/21/2011 09:00:00 am