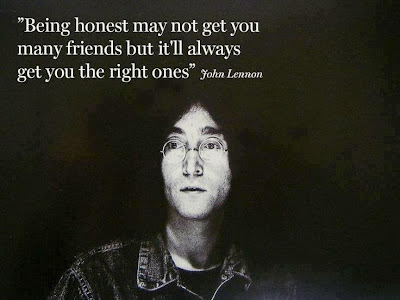 I truly believe being as honest as I can, after many years of trying to figure it out, what the "right" friends are in my Heart.  Have you?

No surprise I was awake when Rob came home this morning in the wee hours.

Bandit and finally decided to get up and stay up shortly before 6 am.  My poor Rob got up at 7:30 as we had an appointment scheduled for 10:00 am in Meaford, leaving here at 8:30 am.  At least he stopped to get himself a 2nd cup of coffee for the road.

While Rob was at the appointment, I turned back down Hwy 26 to head over to my friend, Toni with an "i's" house to visit.  Happy days that we got to have some "friend" visiting time for at least over an hour !!!

I had taken Toni a small basket of apples, and came away with much much more ... a new hat she had give me that I absolutely LOVE ! and a new cookbook with a recipe that captured my attention right off the get go when first opening it.  Lucky girl I am to have such great friends that I do ... really quite beyond lucky I think I am ! 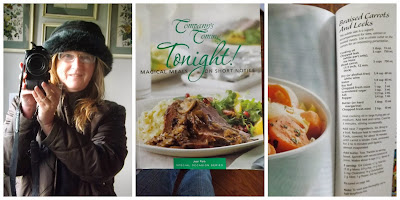 Once I had picked Rob back up from his appointment in Meaford, we headed back Owen Sound way where we stopped at the Billy Bishop Airport to pickup our "new to us" vehicle that we had purchased last week.  Thanks to Toni's husband, Bob, who gave us the lead this vehicle was for sale, we are now the owners of .... 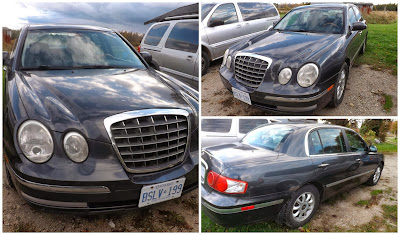 Other then the price was "right", when I had realized there was a Sunroof, Toni had looked at me and laughed, saying, "the sunroof has sold you on it" !  Yeppers she was right !  love the Sunroof, leather interior, heated seats, roomy interior, and that it only had one owner, and that it was spotless !  I do not think the back seat or trunk were ever used. The "new to us" car has been dropped off to our mechanics to have the brakes done on it, and hopefully I will get to drive it by Tuesday for a few weeks before Winter hits hard (did I say Winter??? YIKES !!! ).

Speaking of Winter, I am sad to say it really isn't too far away.  As I sat here this morning at 6:00 am there had been Hail hitting our windows.  Between the rain and odd Sun shower today I am certain the High only reached 6*C .. brrrrr.

This afternoon Bandit and I took in how well the potted flowers in the front of the house, which faces North, are doing.  They never did this well all Summer.  Obviously something likes the extreme cooker temperatures.  Not me ! 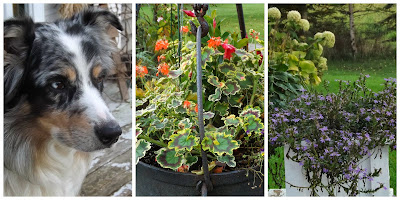 What do I have on the go for tomorrow? would anyone believe if I said I am still working on that dreaded book work of the Crabby Cabbie's?  Drat, it is true ... the house can go to shambles around me until I get that done.  Oh man I really don't care for shambles so much, so I best be getting 'r finished come Hell or High Water tomorrow.

Here it is 7:37 (is that not an airplane?), with Rob about to stoke up the wood stove, and I with a pot of  Homemade Turkey Soup on the stove top heating for us to have ourselves a late dinner, "Just North of Wiarton & South of the Checkerboard".
Posted by Cindy@NorthofWiarton at 10/20/2013 07:46:00 pm