Judge Not Another As Our Emotions and Pain Do Differ.

We can never judge the lives of others, because each person knows only their own pain and renunciation.
It's one thing to feel that you are on the right path but it's another to think yours is the only path.
~ Paulo Coelho ~
﻿
When I came across these words I really felt impacted by them.  How better could they be said?

What one person feels, can certainly not always be what another feels.  We can share our feelings and experiences, but not our inner pain.  If it was that easy to be able to plug ourselves into another to say, "there how does that feel for you, as this is pain and emotions I am feeling at the moment", there would be no need for words.

Trust me, there are times when I have heard and seen the emotional pain of one of my children, or that of family or friend, where I have wished I could plug into their being to take their pain on myself to ease their burden.

And our own Path?  Sharing our life experiences with another, might give them insight as to where they might want to head towards or away from in their lives.  Sharing and listening to each other, I believe, gives us vision to decide what is good for ourselves in our own path of life.  We all have our own freedom to choose, and hopefully not to be judged if we decide not to take another's path.

*Sigh* That was quite the mouthful, I must be feeling very melancholy, as well as tired this morning.

When I was out at the early time of 5:30 am this morning with the "One & Only" puppy that is left, and Bandit, there was a slight coolness to the air, but I am thinking it is going to be a gorgeous weather day here in my part of Bruce County.

I just had to go ruin that predication by going to check out the predication of the Wiarton Airport.  Oh well we are getting quite used to showers and thunderstorms by now I would say?  LOL

What at joy last evening was for me.  First of all the company was great, as my cousin, Brad, and his wife, Paula, invited us to their cottage in Dyer's Bay.  Secondly, I didn't have to cook supper as we had also been invited for supper.

I had never been to Dyer's Bay before, and we had to drive way North of the Checkerboard to get there.

First we passed through the Ferndale corner, right leading to Lion's Head and to the left I don't know other  then we take that way to Stoke's Bay most times.

"This is the corner where I have been turning right almost every Friday for the past two years to get a much needed allergy shot from Dr. Loney's office". 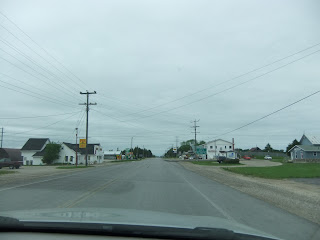 A little bit further North of the Checkerboard we travel.....

"PJ's Restaurant (and previously gas bar), is where you can turn right to Cape Chin, or left to go right into Stoke's Bay". 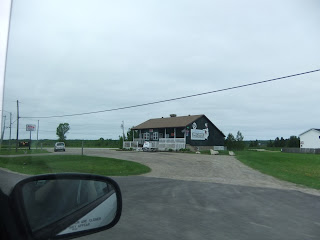 And still further we must travel North of the Checkerboard.

"Miller Lake Road, of course takes you into Miller Lake, where you will find The Miller Lake Campground, The Candle House, and Summerhouse Resort". 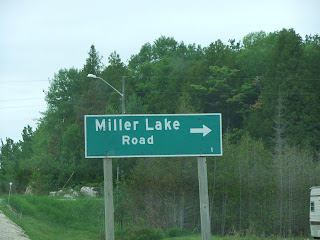 Still further North of the Checkerboard.

"Finally a sign that says, "Dyer's Bay Road", which would be the most logical road to take since were were going to get there sometime or another". 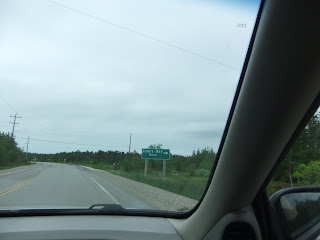 On this long drive way North of the Checkerboard, I found myself complaining to Rob that he was driving too fast for me to take pictures of some of the sights along the way.

"Brake, reverse and there you go Cin, take a picture of that.  I have to admit it was a most unusal sight". 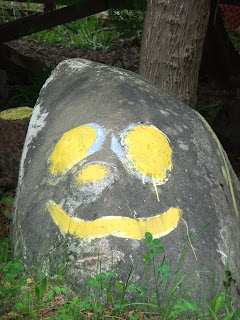 Further along down the Dyer's Bay Road, and further North of the Checkerboard.

"Finally Rob stopped to let me take a picture of this field of wild Indian Paintbrush flowers". 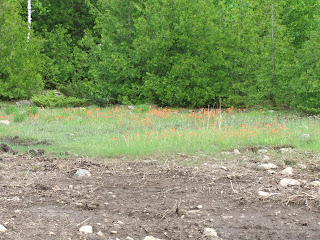 Onward still further North of the Checkerboard we went.

"I was beginning to wonder if there ever was going to be a Dyer's Bay at the end of the Dyer's Bay Road, but as plain as the nose on my head there actually is". 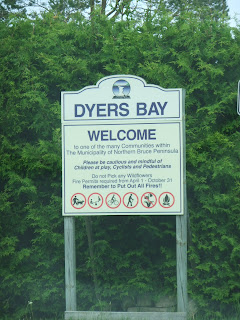 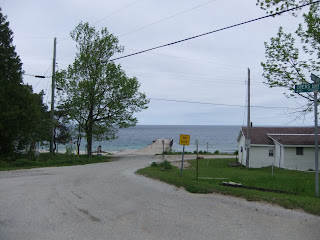 Since we are so far North of the Checkerboard at this point now, I am beginning to wonder....do they really have a cottage here?

"Going a little further up the road to find that Brad & Paula actually do have a residence in Dyer's Bay, with finally a sighting of Paula right there under our noses". 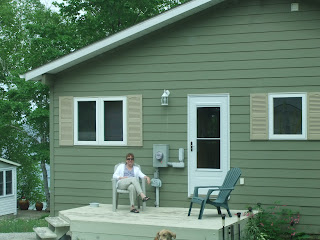 Rob and I really enjoyed our visit with Brad and Paula, as well as the spaghetti supper Paula prepared for the four of us.  Even though it was way North of the Checkerboard for us to travel, I am looking forward to being invited back again !

The sun is shining, so I best be getting my bed made so I can get my day started, "Just North of Wiarton & South of the Checkerboard".