One Day There, Another Here

Yesterday mid-morning I was viewing the CN Tower in Toronto.  I had been living in Toronto when the CN Tower had been erected and up in it shortly thereafter.  I am scared of heights to I did not care to stand to too close to the front of the elevator doors going up, or close to the edge of the observation decks once up on top. 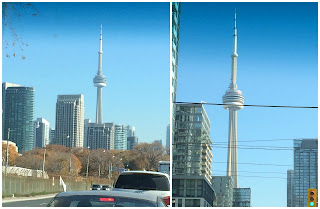 And this morning I was gazing across Colpoy's Bay in the early morning light.  As I have said before, I never tire of the view(s). 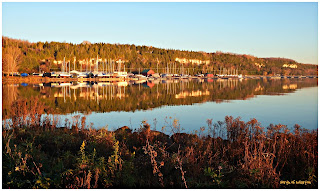 It is really amazing when you think that one day you can be there, another here, is it not?  We are pretty lucky we are able to travel here and there across our Country pretty much as free as can be. I am thankful I was born and raised in Canada.

This morning I was up at 5:30 am.  Did my social media updates, looked after all the Aussies' needs, then headed out for a 1/2 hour brisk walk downtown Wiarton.

I returned home to get a few things done, then waited until 11 am to start the laundry (since rates are a whole lot cheaper from 11 am until 5 pm).  After that Rob and I headed outside together to take care of a few of the leaves.

I was raking around the side garden when Rob showed up with his leaf blower and proceeded to blow the leaves off the deck to where I had just raked ... *sigh*.  Portia and Bandit had no problem walking through the piles of leaves I had piled.  Portia got digging into something ending up with a very muddy snout most of the day. 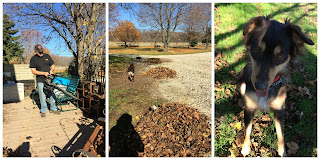 I had to head downtown for a few errands this afternoon.  When I returned home I found that Bandit had himself an obvious battle with a very good Summer Sausage that I had just purchased for Rob this past weekend.  One certain "Rob" left it on the very edge of the kitchen counter wherein Bandit was unable to resist the amazing aroma of it.

Needless to say, "Bandit was a very thirsty boy today", and the sausage has pretty much been mauled even more to an untimely death. 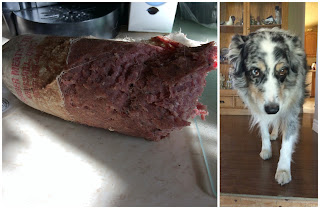 Other then doing a couple of loads of laundry I also made a big pot of Turkey Vegetable Soup with minced turkey.  Coming through town after a late afternoon walk with my friend I had noticed the Wiarton Legion had a Ham Dinner special on.  I stopped on my way home and got both Rob and I a meal.  Yes the homemade beans and scalloped potatoes were very "yummy". 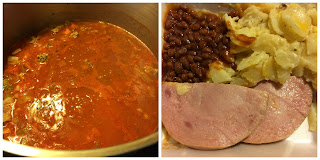 Between my regular at home walking, the early morning and late afternoon walk today I have managed to walk 12471 steps which is equivalent to 5.7 miles.  Yeah me I hope I can continue going forward with this.

My appointment yesterday at the Liver Clinic in Toronto went very well.  My liver is looking pretty good at this point, and I am to go back in a year from now.  Should I want to be a candidate for the experimental drugs I could give it some thought.  The drugs as they are now are a cost of $80,000 for a 12 week treatment !!!  YIKES .... I told him I would wait until next Year to do a retest and decide from there.  Good thing I was sitting down when he told me the price of the drugs or surely I would have keeled over.

I still have not made up my bed fresh from the sheets off the line, so I best get doing that before I am too tired to, Just North of Wiarton & South of the Checkerboard.