A Yummy After 5 Event

Rob was out of bed before I was this morning.  That was an unusual occurrence, and he even took all the Aussies out for me.  That was a real treat.

Rob was still working on the wind breaker fence barrier on our deck this morning.


He not only got the scalloping along the top on the East side done, he also got my new Hummingbird Feeder up.  All I need now is the Hummingbirds to come. 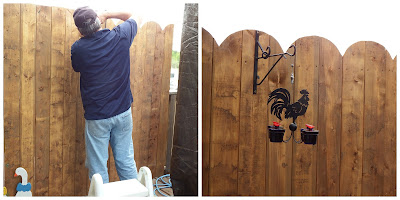 I had a Doctor's appointment this morning, just before lunch, to follow up on the blood work I had a couple of weeks ago.

The run down was Dr. Diodatio suspecting there was a lot more then the Fibromyalgia going on with the amount of  daily chronic pain I have along with the fatigue.  The blood work showed levels of inflammation, indicating suspected Rheumatoid Arthritis.  I was told I had RA in my knees when I was in my 20's, and now it has apparently spread throughout my whole body now.  I have been referred to a Rheumatologist in the Kitchener area so I can be further evaluated and prescribed the correct medication for control of it.  He suspects this is more then likely a big contibuter of my fatigue as well.

As far as the dizziness and balance problems I am still having, I am to start keeping a journal on when and what I am doing when they occur.  Hopefully I am successful at remembering to do this.

I had also been put back on the "high risk" screening for Breast Cancer, given my family history with my Mother, her sister, and their paternal Grandmother.  The Doctor also ordered blood work for Genetic testing as well.  I gave a very big vial of blood today.  I will hear back from his office should the results be positive, otherwise I will be back to see him in another 2 months.

After my appointment I slipped in to see my sister, Jeanne, to take her a couple of bananas, and a very quick visit before going for the blood work.  She looked much better today, however is to have more testing and remain there for a few more days.

After lunch I had an appointment at the Wiarton Chamber of Commerce office at 1:30, which lasted a good hour, then I headed to the pharmacy to collect my prescriptions.

Back home I had myself a bit of a rest until it was time to go to the Chamber Member's After 5 event this evening.   I first went down to The Painted Turtle & Balloon Headquarters to collect fellow chamber member/owner, Wenda Bartley, to go along with me.


The spread of goodies was unbelievably soooo GOOD.  I tried a couple of canapes, a very small piece of cheesecake, and chocolate cake with Butter cream icing .... oh heavenly it all was. 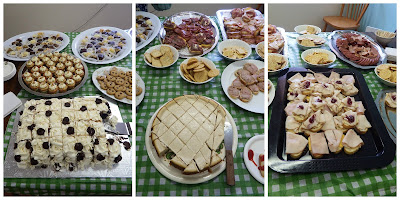 Along with Chamber President, Paul Deacon, Board Directors, a nice crowd of local Business owners, was also Mayor Janice Jackson.  Mayor Janice spoke some very supporting words on how pro-active the Wiarton District Chamber of Commerce was in the Community, which was nice to hear as I certainly know how much work goes on behind the scenes by the Chamber, and its sub-committees, the Wiarton Willie Festival  and the Wiarton Revitalisation Committees.
I am very happy Mayor Janice is a big supporter of local business and the expansion of our community. 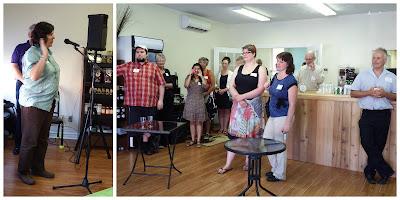 Owner's & hosts of this evenings After 5 Event, were Christian and Karen Koos of the Luscious Bakery Deli, partnered with Community Living in Wiarton.  They also have had Luscious Bakery in Sauble Beach for the past couple of years, just opening this year in Wiarton.  They are a welcomed business within our Community, and really with all their homemade lunches and goodies who wouldn't support them?

Oh the ones photo bombing in the background? that would be Tom of Rural Rootz Nature Reserve, and Wenda Bartley of The Painted Turtle & Balloon Headquarters ... fun fun people ! 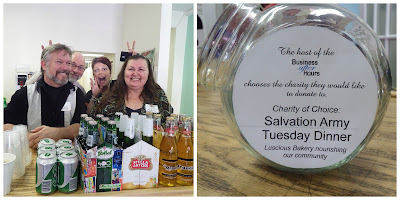 I returned back home to find Rob back working some more on the deck.  He is almost done. 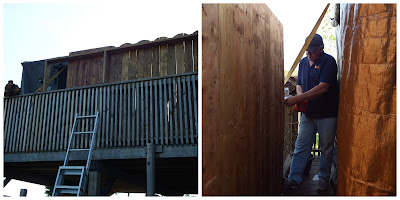 I asked Rob to take a photo of my new T-Shirt I had gotten the other day at Josie's of Wiarton which I wore tonight, and he caught my "impatient" look until he took another photo.  I LOVE supporting LOCAL ! don't you?  I was also very  happy to be the very first winner of the door prizes at this evenings event.  Oh yum, Lemon Curd, Speciality Honey Mustard & Sumatra Coffee Grounds.  Lucky me ! (again Holly Morrow, hahaha, still waiting to win another Cluttered Cupboard fantastic Give Aways !). 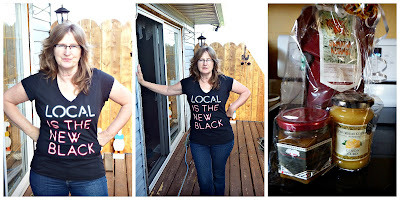 With another full day behind me I am feeling as weary as I was this morning before I got going after a couple of hours before starting my day, however all is good, Just North of Wiarton & South of the Checkerboard.
Posted by Cindy@NorthofWiarton at 5/28/2015 08:55:00 pm