Where Did It Go To So Fast ?

The day flew right by me somehow ... the nice part about it was I spent almost the WHOLE day with Rob.

I was very quiet this morning, letting Rob sleep in, until he got up for us to decide we were going to head into Owen Sound to take advantage of the 75 cent per lb. sale on Turkeys at Walmart.  At that price we could not afford not to put one more in our freezer.

First stop was at Sears, as Rob wanted to just look at washing machines, in case ours can not be repaired (however I think it should be no problem).  After looking at them I think if I do ever have to get another one I might go back to a top loader again.

Sears had Winter Footwear on sale for 60% off today only.  I took Rob over to the shoe department where he got a beautiful lightweight pair of Clark's ankle winter boots for $64.00, Regular priced at $169.99.  The Sales Lady said not many people buy Clarks unless they are on sale as they are so expensive.  What a deal !  The bonus being they are lightweight with Rob being inside the Taxi so much of his time.  The shoe/boot Rob bought is HERE.

Next stop was Walmart where we got a Turkey, and only a couple of other things.  I was very happy about the Turkey as it was a Lilydale.  I do like Lilydale products.  We hadn't even left Walmart when Rob got a work call ... off we went to that.

In the meantime before we even had left home to began shopping I had a text from someone about one of the Festive Five Puppies.  I was to meet back at our house with the people once we had been done in Owen Sound.  Before we had left I had sent them a couple of photos, this one included ... Surely this photo had to put a *smile* on everyone's faces?  it still puts one on mine.

By the time we returned home, received the people who dropped over about the puppies, and sat down to Dinner it had almost been 6 pm !


Never a meal goes by at our house where you have to eat alone, as there is usually an Aussie flanking each side. 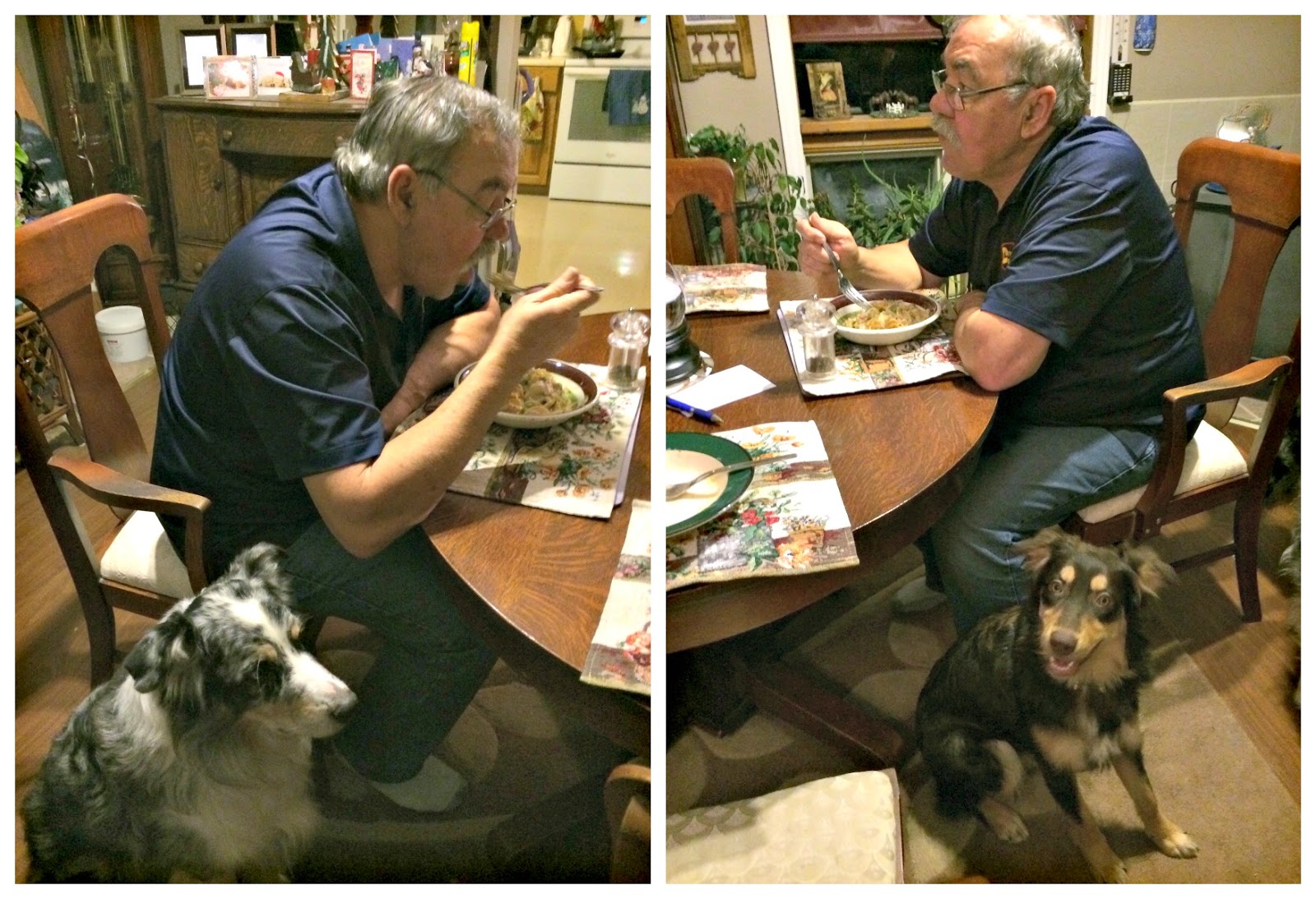 Almost 7 pm here now the day heading into the evening, where did it go to so fast ?  and only 3 MORE DAYS til Christmas !!!  The best part about this Year is Fuel prices are down and the weather has been much better then last Year.  Yes???

On that note I best leave things well enough alone with fear I might jinx myself, Just North of Wiarton & South of the Checkerboard.
Posted by Cindy@NorthofWiarton at 12/21/2014 07:00:00 pm