This morning I really thought I had a fantastic grasp on the situation here at the home front.  The hallway and foyer cleared of any obstructions, swept and ready to be washed.  Then the phone rang and that ended the got a "grasp" on things.  Once I had ran the errand I returned to get a load hung out on the line, another in the washer and the foyer washed.  This I was grateful for if nothing else got done.

Forgot to post this photo yesterday when we had been in Home Depot.  Rob checking out his new future tub, not a new Crabby Cabbie vehicle ... ha ! 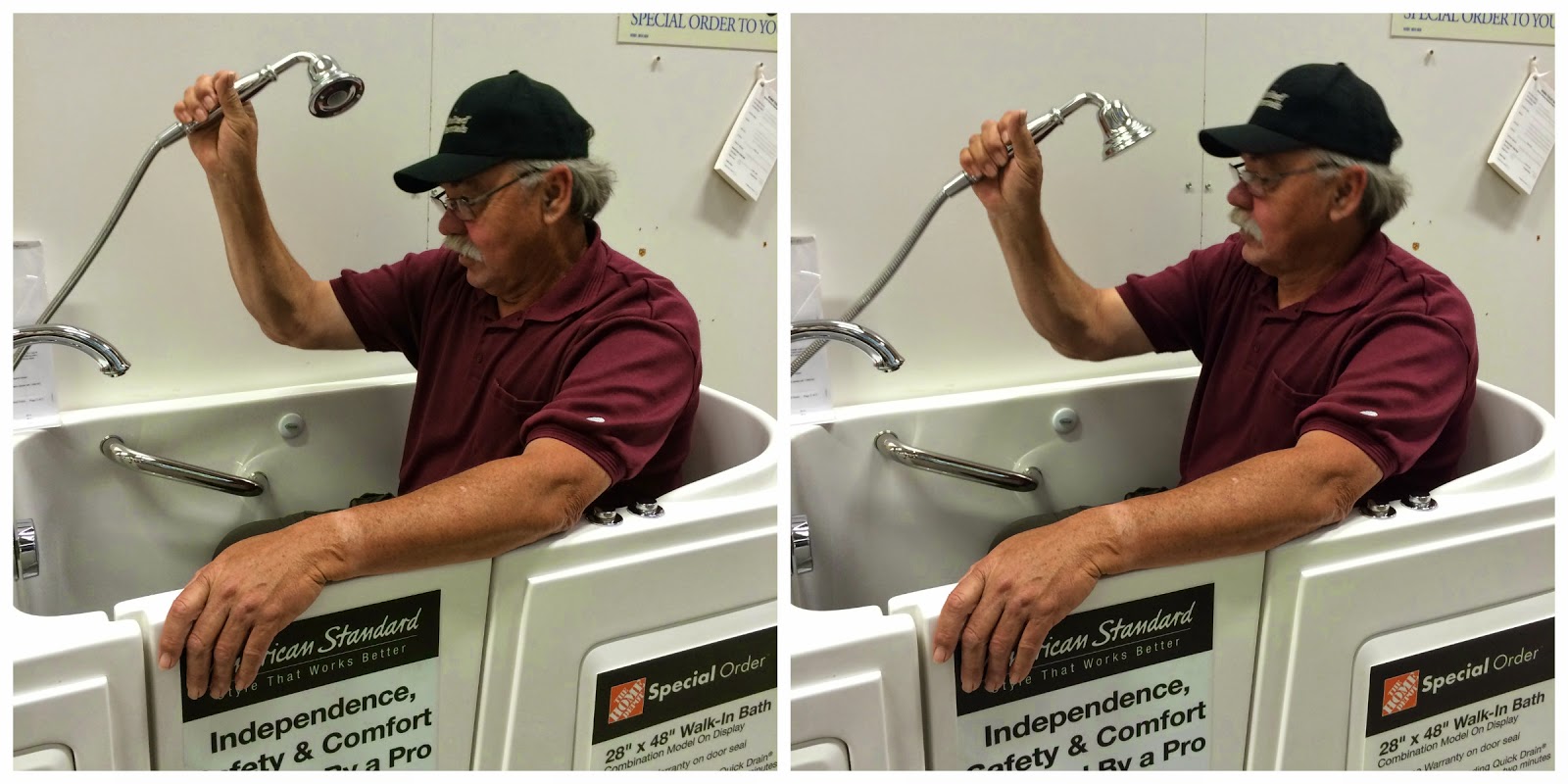 Rob got our Gazebo put up !  and it is awesome.  I can't wait to get indoor/outdoor carpet in it and some patio furniture to put it to great relaxing use. 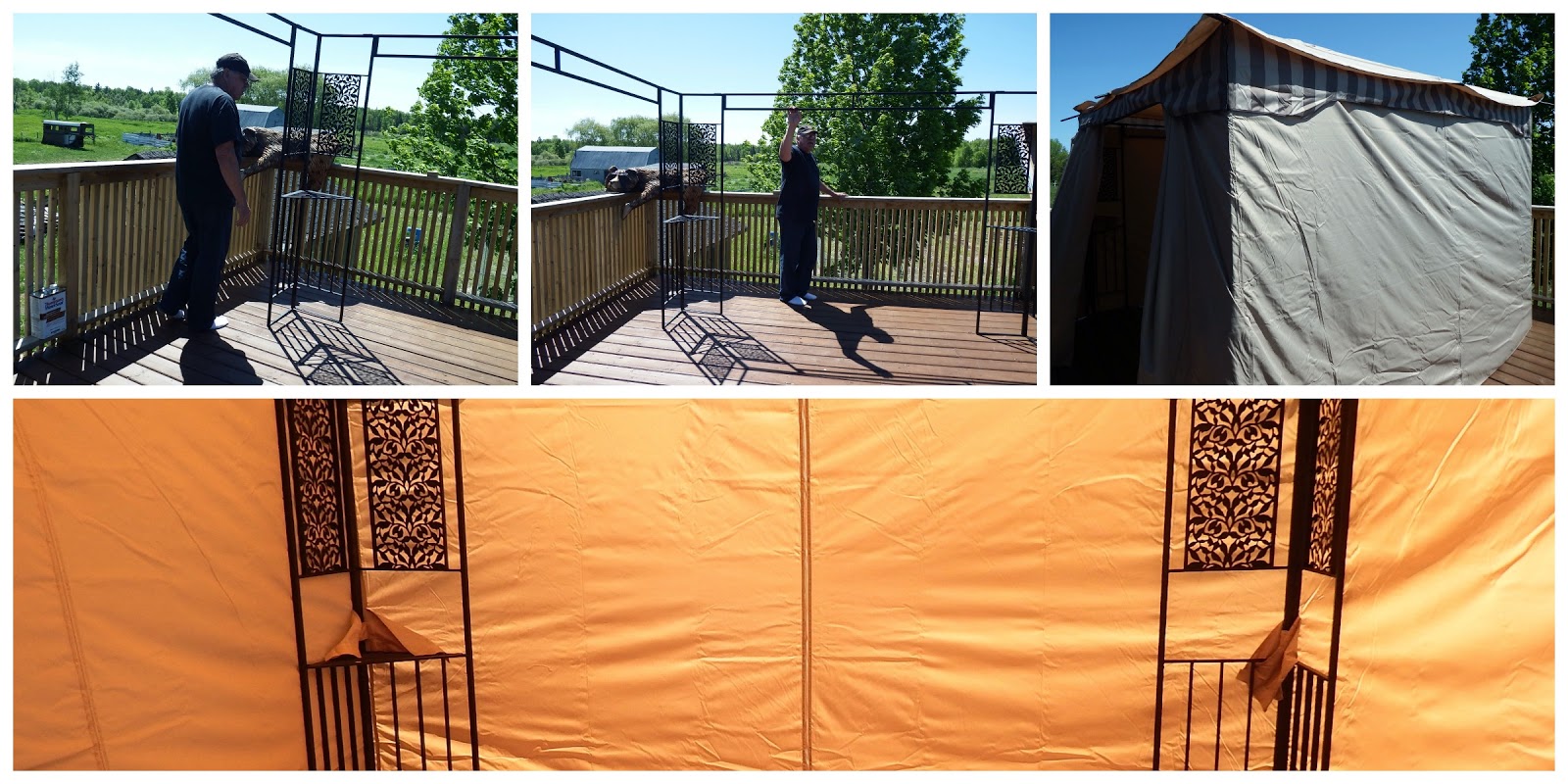 After lunchtime the Wiarton Home Building Centre truck showed up with the lumber to replace our decking at the side of the house, as it is really really in dire need of replacing.  Love the `brown`pressured treated wood rather then the `green``.   Also on top of the load was our new Window for our Bedroom ... hooray !!!  Not to certain when this project will get underway however we are ready for it when it does. 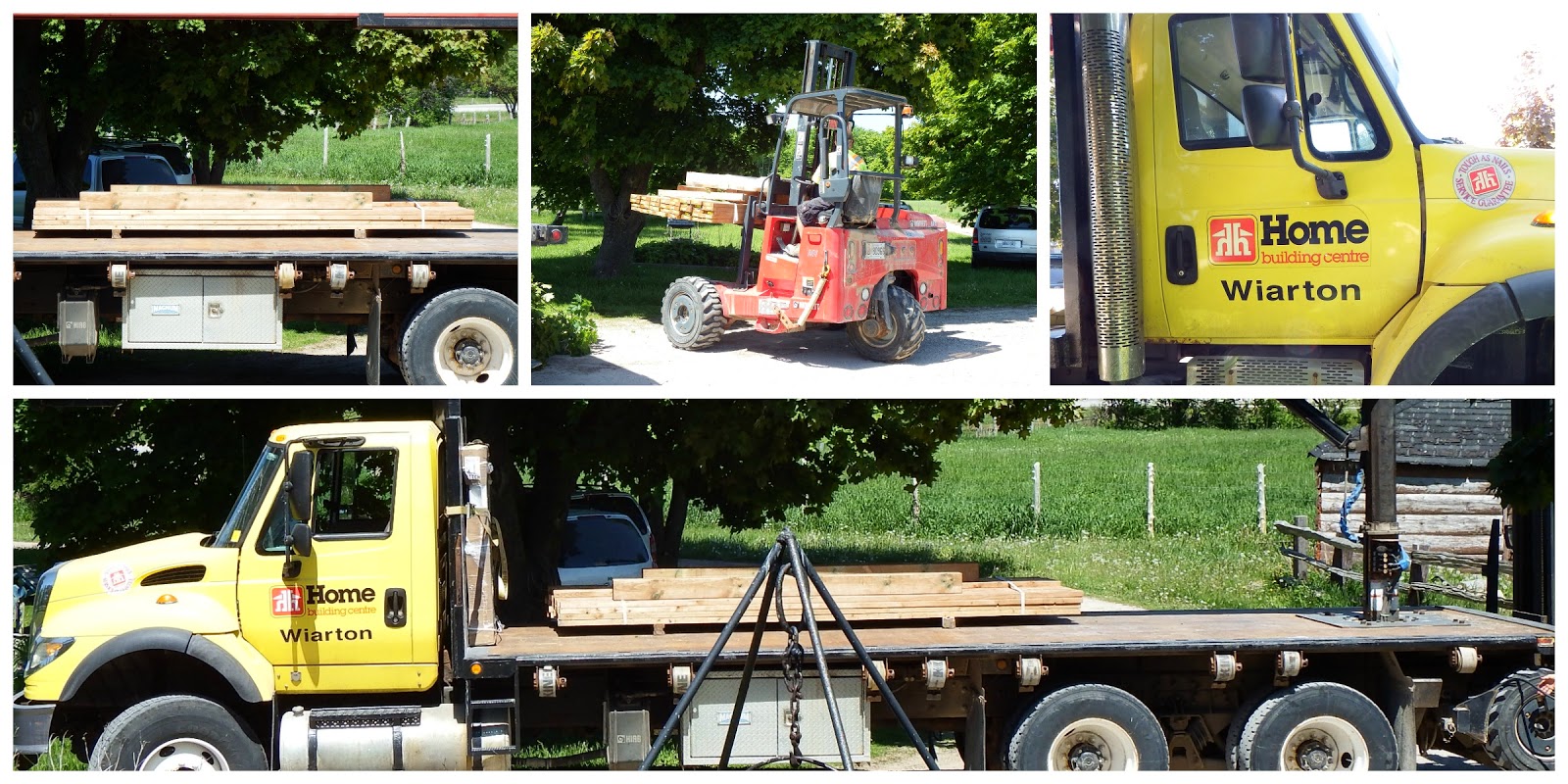 Once the deliver truck had arrived, my poor Rob mentioned how bad the pain in his right side was.  He has had this pain for over a week now.  Dr. Diodati is on call at the Wiarton Hospital on Mondays, so I loaded him up and delivered him to the Emergency Department.  Rob just got released at 6:30 pm, after about 4 hours of being there.  Rob has had blood in his urine for the past year, and the Doctor suspects he might either have a kidney stone or the on set of Appendix could be beginning.  Rob will go for an Ultra Sound tomorrow to try and determine what is going on.  Hopefully there will be some light shed on his nasty pain in his right side (we know it isn't Gall Bladder, as that had been removed).  Poor guy was most certainly out of commission most of his day.

I stopped by the Wiarton Tourism Office today down in Bluewater Park, where my friend Holly works.  Congratulations on your 20th Year Anniversary of working there Holly !!! what a milestone this is for you.  And really Holly doesn't look old enough to have had been working there for 20 years.  And really can you believe this girl also works alongside her hubby, Bill, running their downtown Wiarton Business, The Cluttered Cupboard.  She is solid as a person and an inspiration, and I am fortunate to have her as my friend.


I was there checking out the Day Hike Guide 2014, wherein The Crabby Cabbie has been listed as the Taxi Service for any requirements of hikers needing to get from Point A to Point B.  Actually Rob had his first Hiker fare today from Lion's Head to Tobermory.  The "Crabby Cabbie" is very pleased to have had the opportunity to be listed with the 2014 Guide.  Should you require this great Hiker's Guide, please do so at any Bruce Peninsula Tourism Information Centre at a low cost of $11.00, providing extensive maps within the Guide. 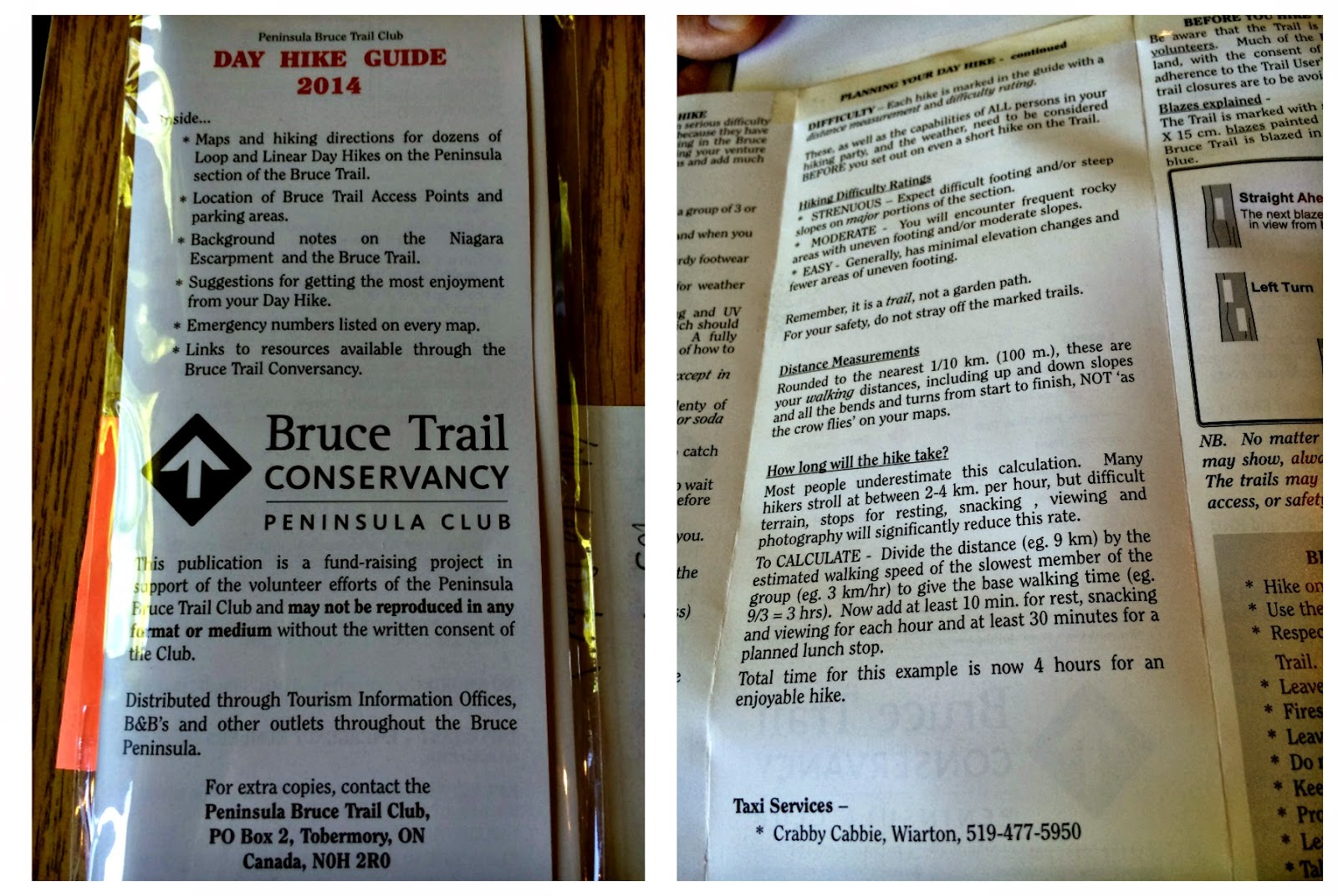 Just thought I would share how my days "Always Begin and End with Our Aussies" ....

This morning first thing while having my cuppa tea, I have a very intense boy and his ball, and last night while sitting on the swing, Lexus keeping me company and having a swing along with me. 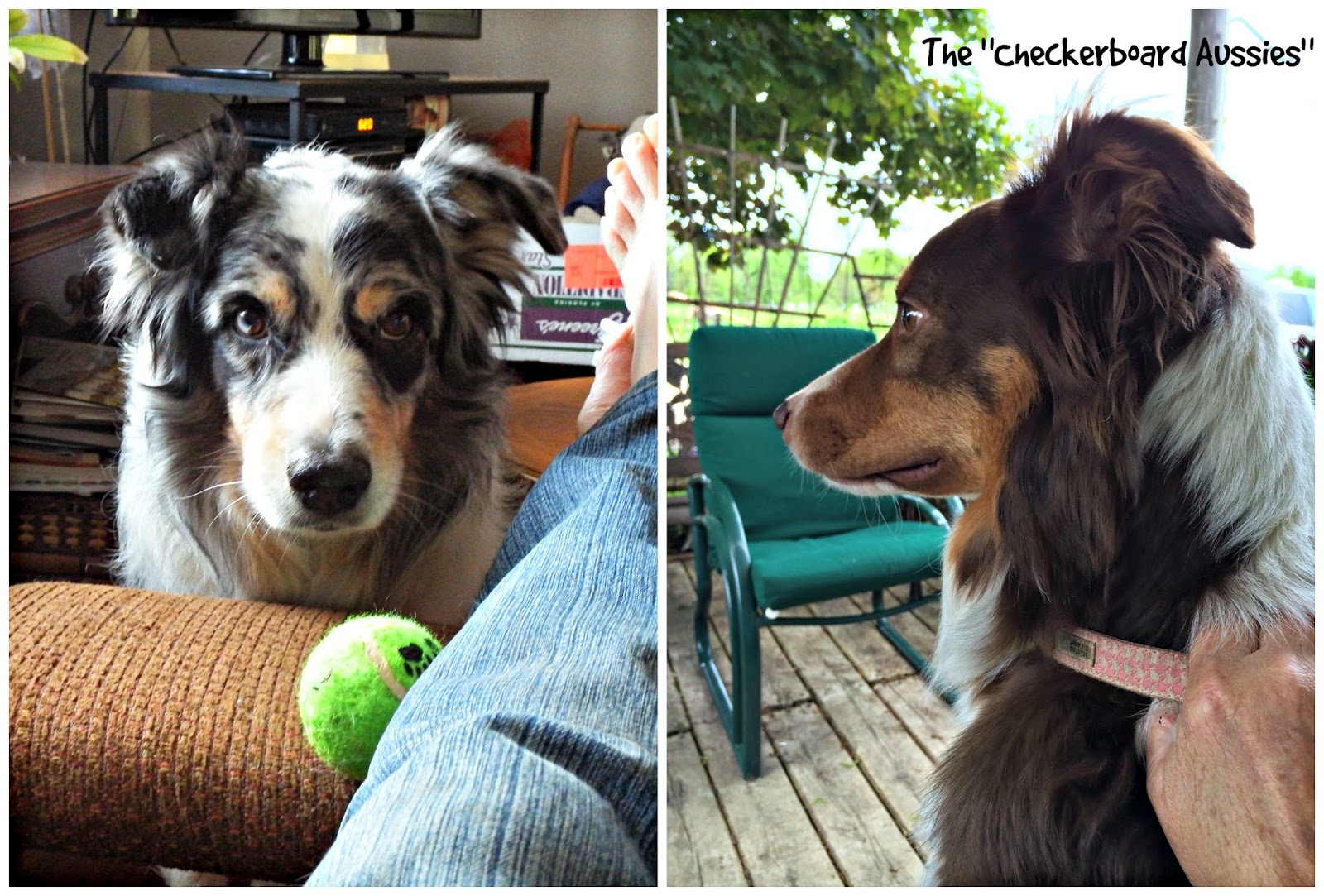 Funny thing was Lexus not realizing I was stablizing the swing while her and I had been relaxing on it.  This morning she decided she would jump up on it for a little more relaxation and when flying when it went a swinging .... poor girl that was the end of that for her !!!

My laundry is off the line and folded (however not put away yet).  My husband is feeling a little dopey from the pain medication they had injected him with, and our Aussies still all need some attention before bedtime.  I was going to have myself a cuppa tea, but thinking I might have a hot shower instead and have myself an early night, Just North of Wiarton & South of the Checkerboard.
Posted by Cindy@NorthofWiarton at 6/09/2014 08:01:00 pm