I have to admit I slept pretty good last night, which was a huge bonus in my books.  I wasn't feeling too bad this morning until I had a bite to eat when my stomach started up again.  It took a bit but by mid-morning I was almost back to a normal state of being.

I got the bed made, dishes done up, of course all the Aussies looked after, our bedroom dusted, then "part" of the bathroom cleaned when I sat down to have a break.

While having a cuppa tea I thought I would check out the ads on Kiji as I have been looking for a small outdoor occasional table for inside the Gazebo.  I actually found something that would work perfect.  The funny part about finding it is that it was on the same street my Auntie Gladys and Uncle Basil live on.  What was even funnier the guy had the last name of my Aunt Gerry & Uncle Reg McArthur.

It was already mid-morning and I had told the guy I would be down there by lunch time.  I called my neighbour, Pari, who went along with me for the ride.  When we got down to Port Elgin we parked at my Aunties and walked up to check it out before making a decision.  Yes I decided to take it so it was loaded up into my Van.

I had to stop into the Walmart Store just up the street, so Auntie invited us for a BBQ outside of Walmart they were having for a Fundraiser.

The money was being raised for the Special Olympics to send a few out to Vancouver this Year.  Hamburger or Hot Dog and drink by donation.  Auntie treated Uncle, Pari and myself.  There had even been fried onions !! they know how to get you.  Thanks Auntie ! 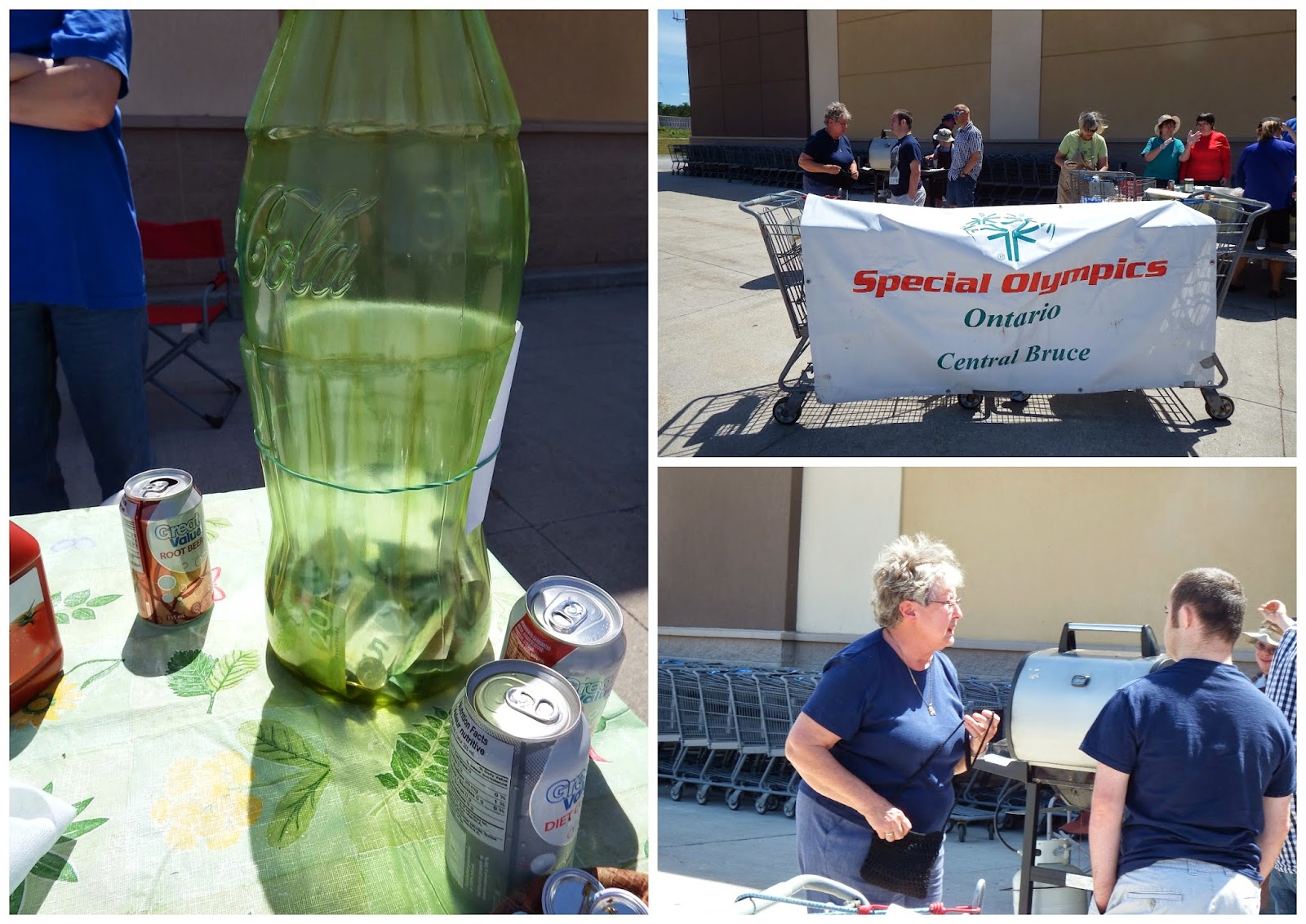 By the time we had gotten into Walmart and back home it had almost been 2 pm.  Where does the time go ... I suppose almost an hour driving each way has to count for some of it.  I had also really lucked out today as not only did I get a table I go a WHOLE set of

.... Wicker Patio furniture which had never seen outside.  It is in mint condition and included the cushions.  The asking price had been $195.00 or best offer, any guesses on what I got it for ?   I am still think as to whether or not I should try and save for an indoor/outdoor carpet for inside the Gazebo?  any thoughts on that point from anyone else would be appreciated. 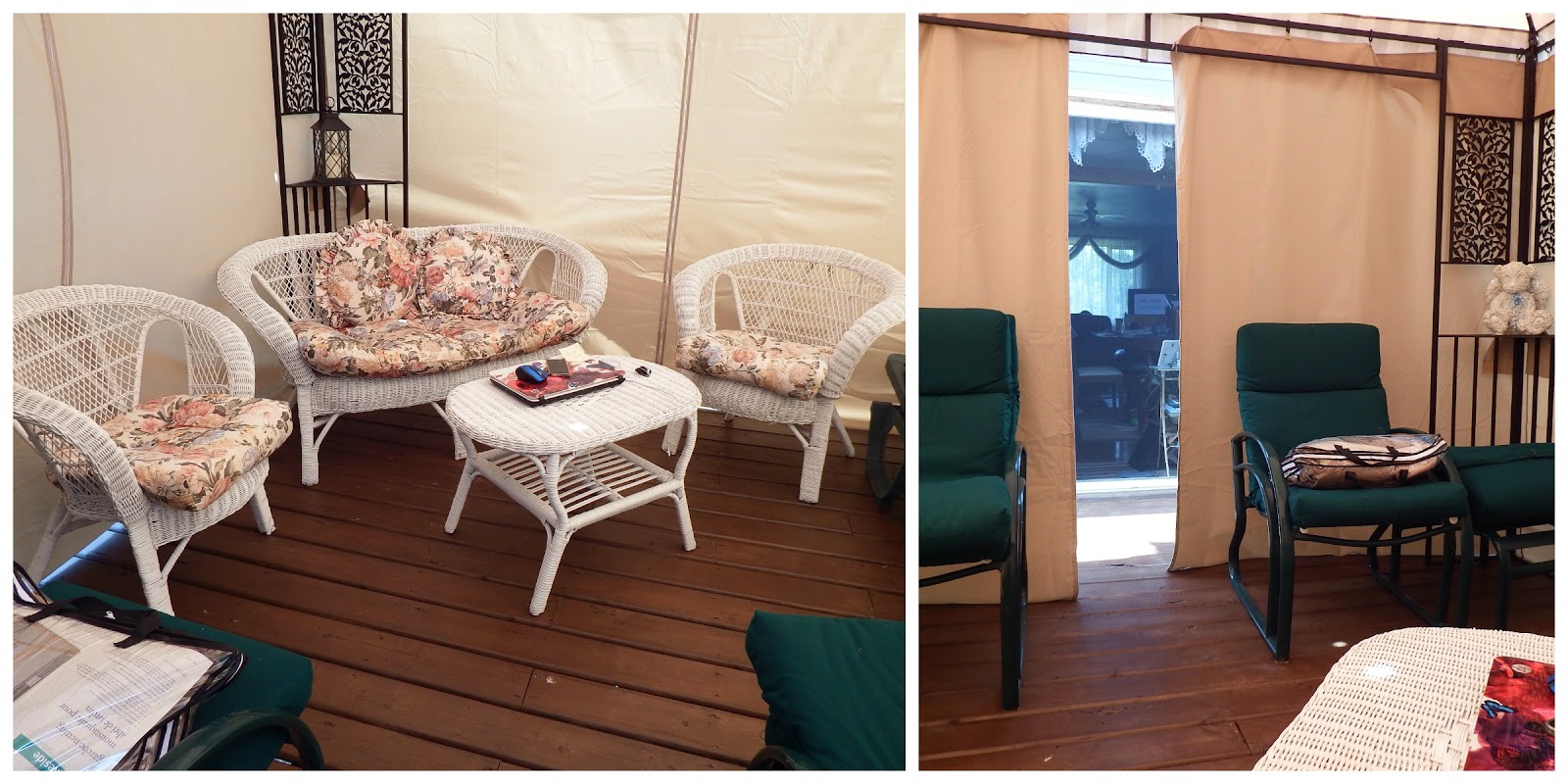 Rob made us a quick Dinner of pre-cooked Back Ribs and Chicken Nuggets along with a side of French Fries.  Worked for me !

Feeling sluggish and not having had been for a walk over a week between appointments, day surgery and stomach bugs I forced myself to call my neighbour to see if she would be on board on going for a walk with me.  Thank goodness she had said YES !!!  and we ended up going for a 4 km walk downtown Wiarton.

I felt much better for the walk and having company to go with.

Earlier this afternoon there had been ambulances heading up Hwy 6.  An accident obviously further up had happened.  Rob has since been called out to the hospital to transport some people.  Good to know they had only received cuts and bruises, and nothing life threatening.  I have no idea of what happened, nor should I, however Summer arrived today, along with more traffic on our highways and more people being impatient about getting to where they are going.

Please do at least the speed limit, not under nor much over, and please if you need to get somewhere fast, leave a bit earlier.  Trust me accidents can be caused by people going too slow and persons wanting to get past them.

On the whole I think I had a pretty good day, other then only part of the bathroom being cleaned AGAIN, Just North of Wiarton & South of the Checkerboard.
Posted by Cindy@NorthofWiarton at 6/21/2014 09:44:00 pm