Today was the day we had booked for the Bookkeeper to come to assist me with the preparations of the Crabby Cabbie's Year End.  This was all fine and dandy until barely into her starting I was knocked down again .... with a dreaded Migraine.

I was so sick I felt ill to my stomach.  We carried on until the point I had almost been in tears.  Our bookkeeper packed up my books, and left, taking them home with her to do them there, telling me to go lay down.  I felt bad that had to happen, but so very grateful that she understood.

I was at a total loss as what would trigger such a debilitating Migraine on such a lovely day with the sky full of Sunshine, until later in the day found out what is lurking ahead for tomorrow:

Major storm bringing 25 - 50 mm of rain Thursday and Friday.An Alberta clipper and Texas low will be tracking towards the Great Lakes where they will merge and rapidly intensify. This storm system will bring rising temperatures to Southern Ontario along with significant precipitation and strong winds.Rain is expected to begin over Southwestern Ontario near midday Thursday then spread eastward to the Golden Horseshoe Thursday afternoon reaching the Kingston area early Thursday evening. There is a chance that a brief period of snow, freezing rain or ice pellets may precede the rain as temperatures rise from just below freezing to above.Total rainfall amounts of 25 to 50 mm are expected over the warned areas, with the highest amounts forecast to be in the Windsor-Sarnia to Hamilton-Niagara corridor. In addition, thunderstorms will be possible over Southwestern Ontario and the Golden Horseshoe, and may result in locally higher rainfall amounts. Significant snow melt due to the rising temperatures will also be a concern.As the rain comes to an end from west to east Friday, winds will increase out of the southwest with gusts to 70 or 80 km/h possible, particularly along the great lake shores.

So this is what has caused all my grief this day.  Whenever I get an appointment to the Headache Clinic in Toronto to help me, I hope, deal with my daily headaches, I will be curious how they will advise on how to control the weather triggered migraines?  truly as I have spend a fortune on Migraine medications, prescription and natural (NO the Magnesium did not work for me, dang it all).

Rob is watching the News as I type this post, and there is areas in Ontario quite concerned with Flooding, as am I.  We have tons of snow.  I hope our sub-pump will be able to keep up with such a dramatic fast thaw.  Fingers, legs, toes crossed.  Would cross my eyes too but my head hurts too much.

Right after our Bookkeeper had left, Rob had arrived home shortly after, looking after all our Aussies for me.  I then got going on getting something in the Crock Pot for our Dinner, as I had taken a small boneless Blade Roast out earlier.


Rooting around in the pantry I found a package of Slow Cooker Beef Stew mix.  The instructions had said to add the package to water, however I changed it up by adding it to Beef Broth.  I was very happy my husband has no problem helping me in the Kitchen when I need it, as today I really needed his help. Just over 4 hours later we had a Crock Pot of yummy Beef Stew goodness. 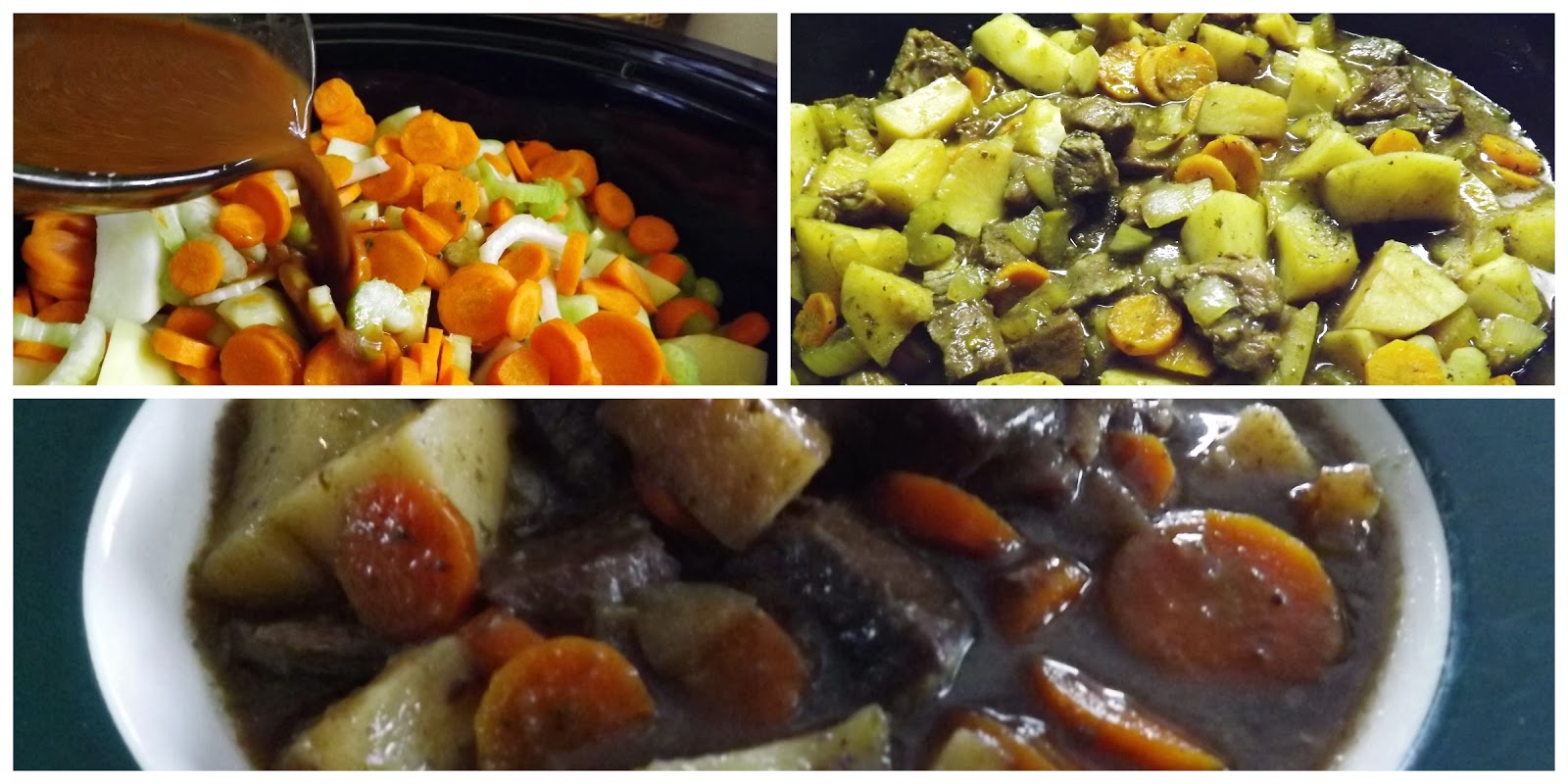 The stew was good, but if the truth be known it was not as good as my own Beef Stew, which is minus any pre-packaged mixes.

I did spend the afternoon in bed right after the Crock Pot had been set to start.  The Electric Blanket had been turned on, along with me wearing a pair of socks too.  I am happy for the Electric Blanket on the bed for times like these, and to warm up our bed prior to bedtime each evening.

Between my Gall Bladder acting out, and my head spinning at the moment I am going to resort to more ibuprofen and the comfort of my awaiting bed, Just North of Wiarton & South of the Checkerboard.
Posted by Cindy@NorthofWiarton at 2/19/2014 06:46:00 pm