What Child Is This ?

Today was not at all productive.  I was tired, thinking the past days, or weeks, have taken their toll.  I have had to slow down and this is what I did today.

A neighbour was in need of a ride to town this morning, so I did this and waited until she was done before taking her back home 2 hours later.  She was extremely appreciative, expressing how good Rob and I were.  That was a wonderful compliment that meant very much to me.

The snow was coming down pretty good here today, the roads a bit greasy, however visibility was really good making Life easier for those travelling.  I am praying the Freezing Rain storm they have been talking about for the past couples of days decides to stay at bay ... http://weather.gc.ca/warnings/report_e.html?on20#onrm39-508cwto-046240

I am always concerned when the weather is bad, worrying about my Crabby Cabbie, and his drivers out there in nasty weather.  I always say a prayer for all of them.

My Auntie and First Cousins, and Niece and I are getting together for a Christmas Luncheon tomorrow.  My Auntie Gladys, Cousin Vi, and myself have been doing this every year for sometime now.  I enjoy our get togethers, so I am also praying the weather stays calm for us tomorrow.

I LOVE getting mail (that are not bills), anytime of the Year, not only at Christmas time.

I received 4 more Cards today.  One from our young friend, Nathan in Australia, another from my friend, Abby, one from Nancy who is in Cindy's Recipe Exchange (& I got an awesome recipe from her too), and lastly a lovely card from my friend, Carla, & her family, of My 1/2 Dozen Daily (with a Tim Hortons Card inside ! she sure knows Rob & I).

I love looking at our buffet as it is full of love and good wishes. 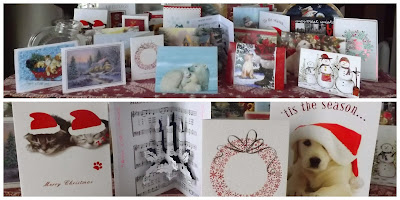 Another fantastic thing I had happen to me, which actually took place yesterday, was my girlfriend, Vicki, calling to tell me the (P) stamps over her way were still being sold.  She got me 100 stamps, and I was ready to do the happy dance about this, as our local Post Office told me the (P) stamps had been pulled from the shelves until after the price hike in March had occurred (dirty pool if you ask me about it).  Thanks Vicki, I LOVE you did this for me !!! xx

Did you not realize there was going to be another price hike for Canada Post stamps in the New Year? read all about it HERE.

Rob had been all over the countryside it seemed today.  When he was in Owen Sound at one point he had some time to kill, so into Canadian Tire he had went to spend the Gift Card he had received when we bought something there the other day.  It was for $10.00.


It appeared Rob could not wait to get home to play with his "new toy" he had picked up. 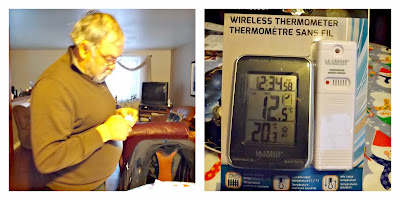 Also while Rob had been in Owen Sound someone had gone up to him while sitting in his Cab, and gave him a Tim Horton's Gift Card, telling him for Cindy & him to have a Merry Christmas.  When he called me he had not known who it was and said it was some lady with a guy who had red hair.  Hahaha ... I had put it out on my Facebook page, finding out it was my friend, Linda & her hubby, Mike.  The funny part about this is that Mike doesn't have red hair, he has NO Hair !!  Rob had to be hallucinating, or now says maybe the guy had on a red hat.  Made our day for having the laugh at my dear Rob's expense.

It was late when I got going on making Dinner for us, as well as cooking up some Mushroom I had gotten on special.  Cooked up and put them into the freezer for soups and stews later on.


Sticking to "bland" foods I made up a Turkey Burger for myself, Sirloin Burgers for Rob, along with White Rice and Steamed Broccoli.  It was good. 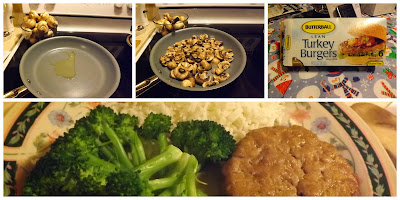 Almost right when Dinner was ready to put on the table Rob got called to go out.  Murphy's Law.  I could not wait much longer for him, so I had mine and heated his up just now, as he returned home at 8:00 pm.

I have many favourite Christmas Carols I LOVE, however this is one I have always really enjoyed ...

What Child Is This ?

What is your favourite Christmas Carol?  there are so many beautiful and fun ones to choose from.

My Crabby Cabbie has left again for work.  I am going to let our Aussies out for their last outing of the day, then call it a night myself, "Just North of Wiarton & South of the Checkerboard".
Posted by Cindy@NorthofWiarton at 12/20/2013 08:40:00 pm