While Rob took off for work this morning I didn't too much but a bit of this and that, as well as a load of laundry.  I truly think I was feeling a "tad" on the lazy side today, very lazy.

I couldn't believe how crazy it was outside this morning.  It was like ... 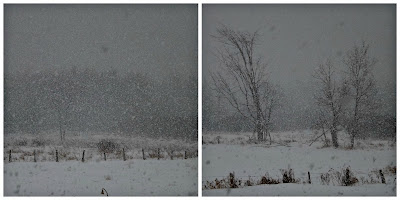 There was at least 4 inches within the hour fall I am sure.


I just happened to look out the front window to see a car stopped.  It had been there for quite a while, so I thought I had best go out to see if they needed anything.  It was a young couple who had run out of fuel.  They had called a cab to come get them for fuel.  I started laughing telling them there were two cabs parked in our driveway.  I thought it was kind of funny, but it didn't matter they called the "other" cab company as I wasn't about to help out that much by driving in that mess. 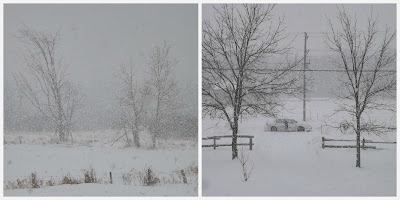 Back in the house after satisfied they were alright, I made a call on Rob's behalf to inquire about a vehicle with a Wheelchair Lift we had came across.  This has been something that has been on our minds for sometime.  When Rob arrived back home he made arrangements with the gentleman to come see it at 2 pm this afternoon.  A drive to Collingwood was in the plan for our day.

First off when we head out we had to go down to the Gas Bar at Saugeen First Nations in Southampton to get our personal Van filled up with fuel, then off we went.  The roads were actually very good.


The Boxing Day Road trip to Collingwood and back was truly not too bad whatsoever.  The slopes at Blue Mountain appeared to be very busy with Holiday skiers. 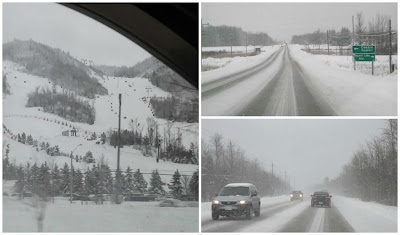 The gentleman we met about the Van was a lovely man.  He had just lost his Wife in March of this Year.  Truly you could tell he was still grieving by the tears in his eye when he was talking about taking her out in in the Van.  She had MS.  I felt *sad* for this lovely man.  He also had a beautiful white German Shepherd Dog.  I had a treat in my pocket for his dog, and this made him *smile*.

On our way home we stopped at Walmart in Owen Sound to return the Canon Camera Rob had gotten me.  We also stopped in at The Source, as well as Staples to check out cameras.  There are way too many to choose from.  I am so tired of reading, and re-reading specs for so many cameras my head is swimming.

I was happy to get back home.  Dinner was easy as it there is lots of leftovers from yesterday.

Not such an exciting day, but a great day with some quality time spent with my husband, and that made me happy.  Tomorrow I have a busy day ahead of me.  Truly being so tired I can not imagine being too far from my bed, "Just North of Wiarton & South of the Checkerboard".
Posted by Cindy@NorthofWiarton at 12/26/2013 07:25:00 pm