Is There A Doctor In The House?

Last night's Dinner ended up being French Toast & Bacon with "real" Ontario Maple Syrup poured over all of it.  Truly it was really "yummy", something I had not made for the past 2 years. 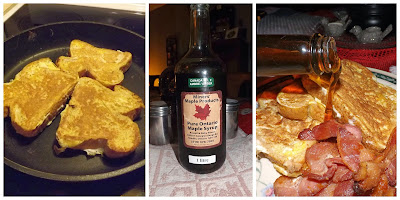 Today was the day my girlfriends and I were going to meet up for coffee, lunch and whatever the rest of the day brought on.  Toni with an "i", Maple Abby, and I all met up over in Owen Sound at the Mall for coffee.

Once we had settled in, it had not been long before Toni's Sister-in-Law and MIL had also came to join us.  It was nice to see them both again, especially having had driven all the way back from Nova Scotia with Kathy with a "K" a couple of months ago.  We also had, Carolyn Marriat, who is a Pampered Chef Representative join us, as I had bought one of their products (used) and had a problem with it.  Carolyn is going to see if the company will stand behind it for me.

I am pretty sure it was going on after 1 pm when both Abby and I began making noises about being hungry.  Kathy and her Mom had other plans, so they were on their way as was Carolyn.

Someone Kathy had known put this kiddie chair in her car.  When we were leaving, she took advantage of opening up the hatch in my Van and depositing it there.  Very funny Kathy ... how will I get you back? I will surely be thinking about who might have the last laugh, as you and your Mom sat safely in your vehicle have a "laugh" ... Ha ! 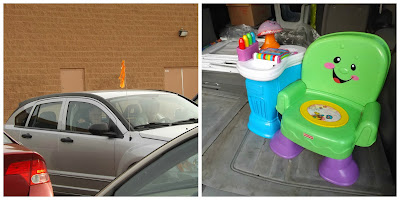 It didn't take us too long for the three of to agree on going to the Swiss Chalet, as it was not too far up the road from the Mall we had been at.

Toni and I pulled into Swiss Chalet no problem, but where did that Maple Abby get to? oh there she is, wayyyyy over there.  Come on girl ! 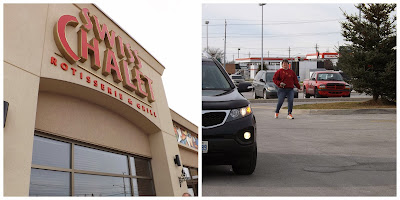 Both Abby and I were thrilled Swiss Chalet had their Festive Special on, and both order it.

We enjoyed the Festive meal, while Toni had a Poutine with Chicken. 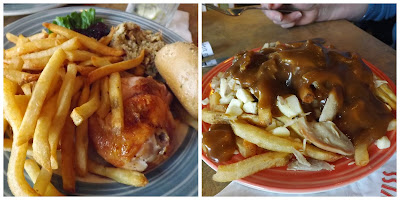 
Hot Fudge Brownies Sundae and Sticky Toffee Pudding.  Abby talked Toni and I into dessert, as we were both really really reluctant to have any more to eat. 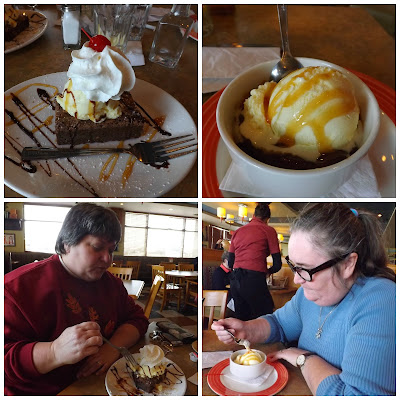 Yes I rolled myself out of Swiss Chalet for Toni to then suggest we head on over to the Value Village Store.  What a "hoot" that was .... first of all when Abby was looking for us, Toni and I made ourselves "invisible" for a little bit of time.


She found us and had a Mink Stole as "show & tell".  The tell was "check out the real feet, Cindy" ... hahahaha, I am pretty certain there was a real nose on the other end of it too.  But this was not only one mink, it was at least a couple sewn together.  Really ???? 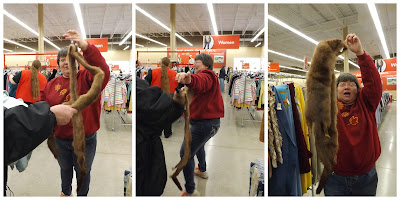 Way down at the other end of the store Abby found a scarf, a really special scarf ...


... a scarf with Balls that one could swing around and play with, why even use it as a scarf when you could have so much fun otherwise ????   then at the "check out" there was a really special Santa Claus that Abby just had to show Toni.  Nope not to Toni's taste, so it was left behind. 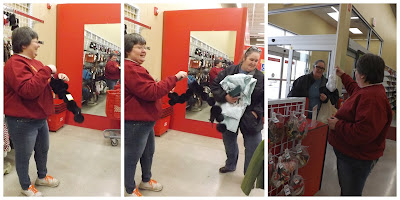 All checked out and ready to go our separate ways, Toni attempted a Group photo, but somehow was left out of it herself.


Here is Maple Abby and I, with Toni with an "i" way over on the other side of Abby. It was a great day out with the girls, exactly what the Doctor would have ordered for anyone needing a fun day out.  Oh and why do I call Abby, Maple Abby? cause she and her hubby, Russell, own Miners' Maple Products, is why, and she is sweet too.  *smile*

I am happy to be back home, as I now unfortunately pay the price of having myself such a great day with a severe headache and pains in every joint and muscle I thing I own within my body.  The headache?  I think Toni posted a cure for it on her Facebook page this morning that maybe she thought that I should try out?

Anything is worth a try once, is it not?  Is there a Doctor in the house?


I think I will pass on giving this method and Doctor a go at it, as I might not lose a headache, but my whole head, and that I can do on some of my better days all by myself.

Some of the members belonging to Cindy's Recipe Exchange on Facebook decided to do a Christmas Card Exchange, and today I received my very first Christmas card of the Season.


Thanks to Joyce, I also have a new recipe to try out too. 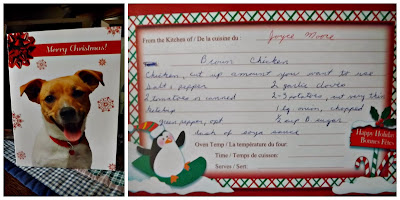 Wow 7:00 pm already.  The day has flown by.  Dinner for me? not a chance after that huge lunch I had, but Rob got something made for him shortly after I had arrived home.  I think I will probably call it an early night as today was another big day for me, and there is lots to be done again tomorrow, "Just North of Wiarton & South of the Checkerboard".
Posted by Cindy@NorthofWiarton at 11/20/2013 07:12:00 pm