BEWARE ! It Does Not Get YOU

My one and only brother, Allan, called me this morning just before 8 am wondering if I was up and at it.  Ha! yes since the wee wee hours of the morning being around 4 am.  If I am not up and at it before 5 or 6 am any morning, you definitely know something is wrong with me.

Regardless I was getting a visit and he not only brought me a Tim Horton's Coffee, he also brought us two packages of Venison and one of Moose.  Allan always shares a bit of what his "share" is from any hunting party he had been with each Year when they get something.  I was happy I finally gave him his Birthday Gift I had for him from last Year ... geesh, I had to dust it off before giving it to him.

Bandit most certainly loves his Uncle Allan.  You can well imagine the reception he got when he arrived at our door, just by all the kissing he got when he got sitting. 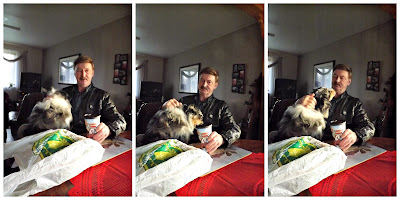 Once my coffee visit was over I got going on a bit of this and that of tidying up here and there in the house, as well as doing up two loads of laundry.  Also when I went into the filing cabinet to get some labels I was surprised when I found ....


... this in a folder marked Recipes that I had forgotten about.  21 Delicious Healthy Recipes? can't wait until I am reminded what was considered "healthy" in the Year 2000. 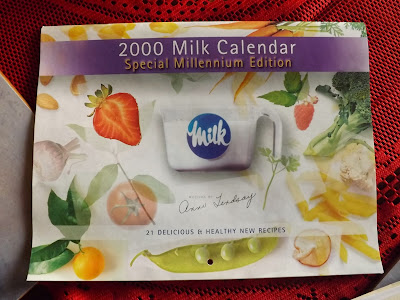 I had plans to go to the Zion Church Bazaar in Sauble Beach with my girlfriend, Colleen, as it it had been this weekend last Year when I had gone.  Well that sure did not happen as Colleen's husband called to tell me there was no action around the Church this morning (they live almost beside the Church).  Darn it all, it is scheduled this Year for next weekend !  I am still going to miss it as I have a Retirement Party for my best friend I am attending to that same day (depending on weather of course).

Since I didn't get over to Sauble Beach today, we decided to get a couple much needed things done before the snow really hits us to stay for Winter.  With all the hours Rob puts in, and being sick with a head cold the last couple of weeks the poor guy just never gets a break to do anything around the house.  Something always seems to get neglected at home when you have your own business, especially with irregular hours of Taxi business.


However today the patio furniture was lowered down from the upper deck and now has been safely stored in the barn until next Year.  Rob also filled up the wood spot in the basement.  It is a small start, but at least a start. 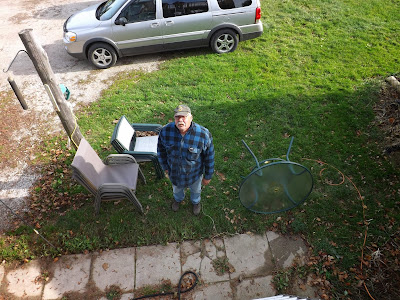 This afternoon I had a funeral to go to at Wiarton's St. John's United Church.  It truly was a sad day for the family, as it is really not to be to have a child pass before a Parent, is it? and so young at 49 was this young man who has left this World.

The service was so moving, and I had forgot to put tissues in my purse.  The Minster's sermon was amazing and very moving.  I was raised United Church while growing up in Southampton, then going to Anglican, and later to Faith Missionary Mennonite Church in Kitchener when my boys were small, both being baptized there.  My point being, I really enjoyed the fellowship after the service, but then again I am far from not being a social person.

By the time I arrived back home it had been late afternoon around 4:30 pm.  My poor Rob was done, done, done ... I am afraid the Cold virus of two weeks has now progressed into a Flu.  He is very much under the weather.

Rob Flu sick, and I with another rotten Sinus Headache.  What a pair we make.  Rob had had himself a hot bath, and I am going to be running one for myself very shortly before calling it an early night..  Beware it does not get YOU, as this Flu bug has been going around.

I have been hearing rumblings that there is some nasty weather coming the next few days in the way of high winds, thunderstorms and snow? more then likely the culprit of my Sinus woes again.  We have no plans for tomorrow, even though there is lots to be done,  I am hoping there will be whole day of doing NOTHING for my Rob and I, "Just North of Wiarton & South of the Checkerboard".
Posted by Cindy@NorthofWiarton at 11/16/2013 07:21:00 pm