This morning we headed out after 8 am down the Highway South, as today we were having a Thanksgiving Gathering with Rob's Family.  I kind of feel a bit responsible, as we had not gotten together at Rob's oldest brother's for two years, and the other day I had called his sister, Delores, to ask if we were getting together this Year.  Pretty pushy on my part, was it not?  doesn't matter as they BOUGHT it and we got to go there today !!!  More to be thankful for, I am, I am ....

We had to go the round about way today, as I had something to drop off for Paul and Liz since they could not transport it home on top of Liz's little Mazda car yesterday.  I am to get "before & after" photos at a later date that I will post at that time.

The round and about way took us through Wellesley, where we spotted the Swans in the river while we crossed the bridge on our way to New Hamburg.

Once spotting us this Swan separated himself from the others to make his way towards us where we were standing on the bank.  I took off fairly quickly as memories of the Swans at Fairy Lake in Southampton were them being quite aggressive and scary, but then again maybe they had been sitting on eggs? and I had been too young to know such things. 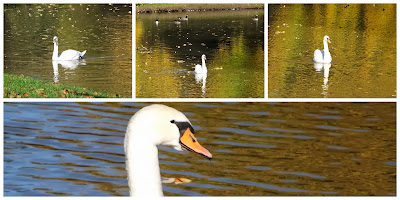 It was however brief by the time interest in us was lost, as he made his way to maybe seek out the other three who by this time had crossed under the bridge.  Truly they are so elegant & majestic, are they not? 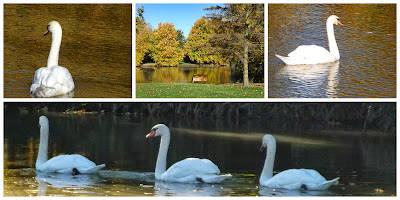 After we had dropped around to see Liz, we then made our way over New Dundee way to where Rob grew up at his parent's farm.


Many changes have taken place at the Home Farm since Rob had left there many years ago now, with it having changed ownership a couple times over the years. With a bit more time on our hands before we had to be at Rob's brother's in Elmira, we made our way into New Dundee to give my long time friend a "surprise" visit at my home away from home.

Rob had been by a few weeks ago, however it was the first I had seen evidence of the new in ground pool that was being installed.  It is HUGE !!  I can't wait until I go down next Summer for maybe an extended visit? 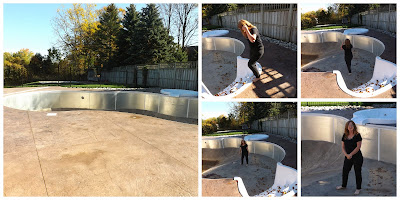 Tim had been sleeping, so hopefully we will get to see him next time around we are back down that way.

We made it to Rob brother, Wayne's, in record timing for a nice visit before Lunch was served.


A Ham & Scalloped Potato Dinner with all the trimmings really hit the spot.  Thank you for hostessing this family get together, Wayne & Marjorie.  It was nice to get a photo of the three eldest, Wayne, Delores and Rob.  Unfortunately Roger and Peter could not attend this day.  Thanks to Wayne & Marjorie's son, Brian, we had a group photo done. 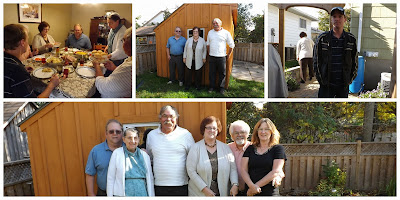 Delores had brought along a video of a documentary on the Train they had been on when gone on their 40th Anniversary Cruise to Alaska.  I really enjoyed watching the video, as it was AMAZING ... check out what the video had been about by *clicking* HERE.


We made two stops on our way home.  One to get fuel, where the Old Order Mennonite Family had been stopped, and not to get their Horsepower fuelled up, but to use the pay phone, and then in Neustat to buy a 1/2 Bushel of eating apples, at a great price of $11.99.

By the way, all my Guinea Pigs really enjoyed the new Dessert Recipe I had tried out on them today.  The Pumpkin Cake with Cream Cheese Icing had been a "hit", despite Delores asking me if I had forgotten to peel the pumpkin ... ha ! what a smartie she is. 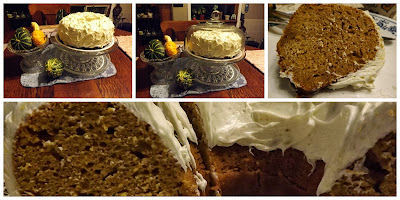 Am I tired? of course who would not be tired after such a great weekend spent with family members and having so much to be thankful for, "Just North of Wiarton & South of the Checkerboard".

**Please note all photos and contents of this Blog belong to the Writer.  Please request      permission before using any content, photos or otherwise.  Should permission be granted,  photo credits are to be linked back to the "Just North of Wiarton & South of the  Checkerboard" Blog and its Writer.
Posted by Cindy@NorthofWiarton at 10/14/2013 07:58:00 pm