If Not For The Volunteers

This day began before 4 am for me, as I could not find sleep after this time.  However there was still beauty within the beginning of it which first started at home ...

When I picked myself a Rose to adorn our Dining Room table, then continued as we put some time in gazing out over the Lion's Head Marina prior to our appointment this morning with the Good Doctor. 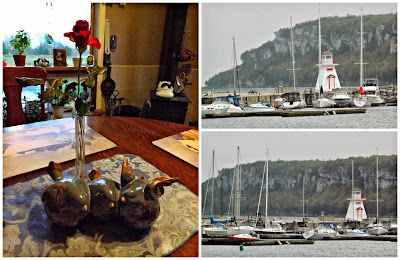 Dr. Loney was understanding of the pain poor Rob has been enduring with the torn muscles, hopefully giving him some relief until healing begins, by freezing the area and injecting some cortisone as well. 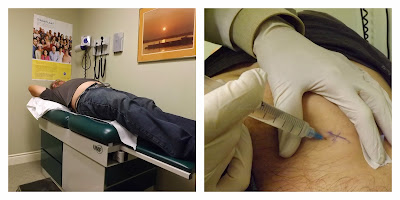 Once our Doctor's appointment was over, we headed on South down the Highway as today we had a couple of appointments to view vehicles as well this day.


Choices on purchasing a pre-owned vehicle never come easy to me, like anyone else we hope the choice we make is a "good solid" choice.  A car? and hand over my much loved 2003 GM Vandura Van to my "Crabby Cabbie", or another Van?  So far another Van won out, purchased from Listowel Honda, where both Rob and I experienced "Excellent" Customer Service from General Manager, Keith Blackwood.  We would never hesitate to return to this Dealer in the future based on the service we had received this day. 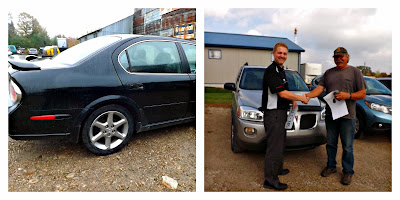 Vehicle shopping is a very exhausting exercise, as I am certain most would agree with.  Since our very first "Crabby Cabbie" vehicle is almost at 400,000 km, we thought now would be the time to make a purchase of another vehicle instead of waiting for something to go astray, as well as before Winter has its hold on us.  I am praying we made the right choice for us. Our purchase? a pre-owned 2007 Pontiac Montana Van for an excellent price.

We never returned home until after 5:00 pm.  I had to do a "mad dash" to get ready to head out the door again as I had been invited by my friend, Gayle, to attend a Fundraiser Dinner for the Peninsula Community Food Bank.  Proceeds from the Dinner were being raised for a Perishable Food Storage & Facility Upgrade for the Peninsula Community Food Bank.


All 200 tickets to this Wiarton Fundraiser Dinner had been SOLD OUT within the first 2 weeks.  A chance to win a door prize was given to each person who donated an item at the door for the Food Bank.  I was very pleased to see Stu Paterson was going to be the MC for this evening's event.  Stu is a retired "Radio Man" from .... way back when Stu?  The Legion's Ladies Auxilary had 3 lovely baskets as Silent Auction items along with many other numerous Auction items donated by local businesses. 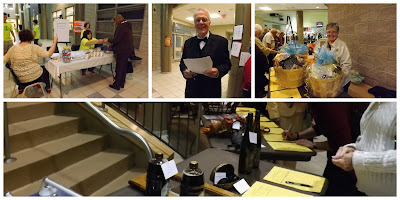 Wiarton Willie was also in attendance.  This evenings Menu was Goat Cheese & Prosciutto Stuffed Chicken Breasts, sauteed vegetables and roasted red potatoes, along with Dessert choices of Caramel Apple Tart or Triple Chocolate Layer Cake (of course Gayle & I had the Triple Chocolate Layer Cake).  Wiarton Service Groups were all involved in this Fundraiser Event, with Mike Mason spearheading the project.  I had a chance to meet Mike in person this evening, and what a wonderful person he is with no surprise with the amount of time he puts into this Community. 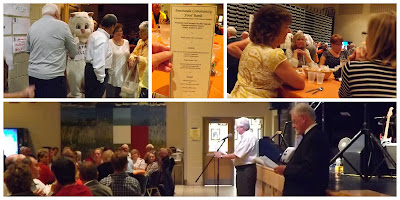 The Team behind the scenes who put forth 200 meals, out done themselves, and I think had fun doing it as well.  Way to go students of Peninsula Shores District School !!! 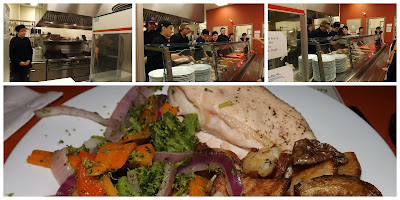 There had been entertainment by Brooklyn Hewton, as well as local band, the Night Train Blues Band (video hopefully loaded tomorrow).  Acknowledgements had been made, and another donation to the Peninsula Community Food Bank was made. 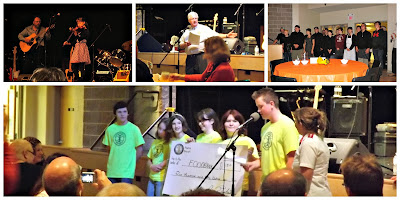 It was a wonderful enjoyable evening with me being very fortunate my friend, Gayle, extending the invitation to include me.


The evening ended with Gayle winning one of the three door prizes.  She won a local hand painting and Pumpkin Pie Fudge (Northern Confections). 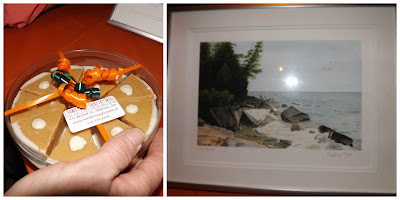 If not for the Volunteers in this World, where would our World be?

I am pretty sure it would not surprise anyone if I made the statement, "I have another very full day ahead of me tomorrow", "Just North of Wiarton & South of the Checkerboard".
Posted by Cindy@NorthofWiarton at 10/04/2013 10:18:00 pm