A Plan Wrecker He Is !

I had a pretty good cuddly warm sleep last night right until 5 am this morning.  I was so cuddled in and still tired I wanted to stay in my bed for much much longer, cause my muscles were happy were they were.  I had to get up as of course, like most every day, I had made plans for this day.

Right of the get go the day did not go according to plan, as by the time Rob and I did head on down the highway together it had been much much later then planned.  This did not bother Rob in the least as I hadn't told him what my plans were.  He had thought we were heading down to have lunch with the kids in New Hamburg this day.

When we had finally began our journey South out of Bruce County it had been overcast and a bit on the wet damp and windy side, but nothing too serious as been reported further South.  I was quite enjoying the Fall scenery. 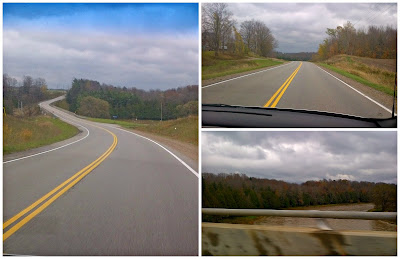 You can well imagine my excitement when we had spotted the Dunkeld Turnip Waxing Plant.  Of course we bought us some Turnip ... I LOVE me some Turnip, and at the $10.00 for a whole box of small Turnips I really loved it.  Before Thanksgiving I had paid almost $3.00 for one turnip at .57 cents a pound ! 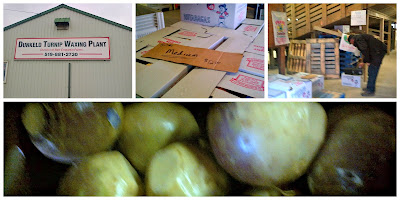 As we headed further South through Clifford we were beginning to see the evidence of the snow we had been hearing about South of us. 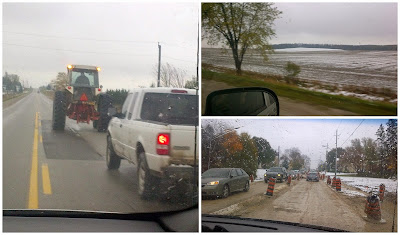 Past Harriston Rob realized he had not the work phones with him to "call forward" the business numbers to our driver that was going in for his afternoon shift today.  Do you know what this meant???? yes, it meant that halfway into our trip where we were going we had to turn around to head back home.  These "said" phones were locked in his work van which nobody else had access to.

*Sigh*  I had to breakdown and tell Rob that the surprise I had up my sleeve was that we had actually been heading down to New Dundee to the Hallman School's Reunion, where he had attended school, and then afterwards to our favourite restaurant in Kitchener, Golf's Steakhouse.  What a disappointment for me, and once I had told Rob I think he had been a bit disappointed too, especially missing out a dinner at Golf's.

I told Rob since he had wrecked all of my plans I had made for every day of the week this past week, he was just a big old "Plan Wrecker" he is.  He laughed at this and said he was a "Home Wrecker".  No dear that is not quite the same thing ... ha !

Today is our 17th Anniversary of Marriage.  I wanted this to be a "special" day for him.  Rob mentioned that it was not meant  for us to go, and do you know this I can understand.


Heading back North up the highway towards home, we made the best of it all and had ourselves some fun together.  What the heck else is one to do? 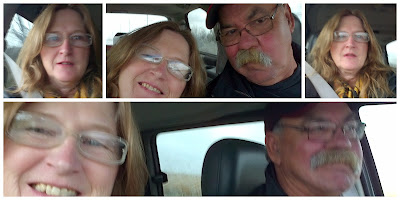 By the time we had arrived home and changed up the phones it had been going on to 3:00 pm.  We decided we would try a restaurant between Owen Sound and Chatsworth we have been hearing so much raving about since it opened a couple of years back.


It being late afternoon, and still before the Dinner hour, there had been no wait for a table.  Coming in the front door a cooler of baked goodies were right in eye's view.  The decor and seating were very comfortable.  A very nice homey atmosphere it is. 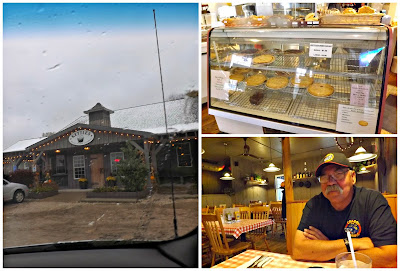 I ordered my favourite Dinner, Liver, Bacon & Onions, while Rob ordered a striploin steak med-well.  The bottom photo was a homemade pecan tart we thought we would give a try later on today. 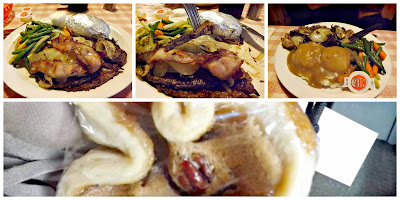 The portions were very good with everything hot, and barely a wait for our meals after they had been ordered.  The "clincher" both our meals were terribly greasy onions which were served over top both the liver and Rob's steak were slick with oil, and his steak was med-rare.  Since the waitress had only came around once to ask how our meals were, before we had barely a first bite, we never had a chance to relay this to her.

Really totally our fault we never said anything, as this point in the day we had not yet eaten anything so we had both been pretty hungry, and just ate what was in front of us.  Will we go back?  no we did not think so.

We tried the homemade pecan butter tarts partway on our way home.  The crust was tough, and there had been maybe one pecan in the tart I had.  Really truly for all the raving we had heard about this restaurant I was expecting something as good in comparison as two of our other favourite restaurants, being the Redwood Restaurant in Clifford, and The Green Door Cafe in Wiarton.  Another disappointment for this day.


The store front was not only "done up" for Halloween, they rent Halloween Costumes too !!!  I especially LOVE the pumpkin display they have going on, don't you? 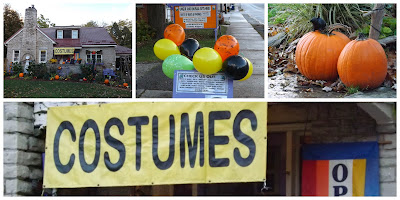 Back home and settled in with a coffee I check in on my Facebook page to see that a "whole bunch" of well wishers had expressed Congratulations to Rob and I.  My friend, Toni with an "i" had also posted a photo to my Facebook page.  Once seeing this picture, I had commented that Rob had "shrunk" meaning he was a head shorter then me as depicted in the picture.  Well she called me and told me to *click* on picture too see the "whole" picture ..... please do not go any further if you do NOT have a sense of humour. 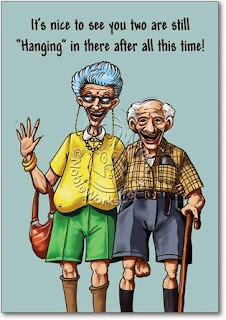 Really my friend, Toni with an "i" that made my day regardless of how the day's plans had seemingly been wrecked, or not.

The important part of this day, as is every one of my days is that I am with the person I love, and I do so love my husband Rob with my whole being, this day and everyday whatever each day might bring us, "Just North of Wiarton & South of the Checkerboard".
Posted by Cindy@NorthofWiarton at 10/26/2013 07:44:00 pm