Apparently we are to have more rain and Thunderstorms again by Wednesday, so two days before ....

Two coffees later I got the bed done, put a load of laundry in the washer, did a Crabby Cabbie fare, and got on with my day.

The corner where the Woodstove is has been bugging me for some time.  I decided the million other things needing done could wait while I got going on this corner.  Not only was it vacuumed, dusted and washed down, the Patio Windows also got washed, as that had been also been bugging me for some time.  And besides should they not be clean before another rainfall mucks them up again on the outside?  This was quite time consuming, but I got 'r done. 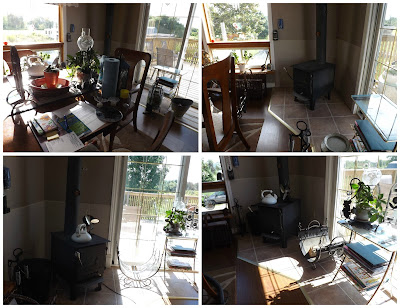 Poor Bandit is having another bad run in with Mites again.  It started this time last year and took me over a month to figure out what was going on, and that it had not been "Hot Spot", nor "Fleas".  Since Rob was coming back home via our Vet in Mildmay this morning, I called to arrange for him to pickup up some Revolution for our Bandit boy.

Yes we have just caught the problem here on Bandit's back before it has gotten any further.  Did I hear you say Medicine, Mom?  Yes Bandit it is coming your way ... 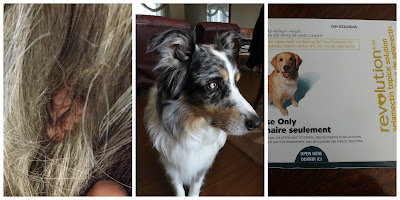 I finally managed to get the load of laundry hung out on the line.  I am taking advantage of the good weather as long as I am able.  I also was out in the Veggie Garden.  Other then for the Beets, it has been a *sad* Year for the garden, as the tomatoes have not been ripening as they should.  Then there is the case of the Rooster with his wheelbarrow of Hens & Chicks ... the wheelbarrow fell apart, and the head of the Rooster was soon to follow, *sad* indeed. 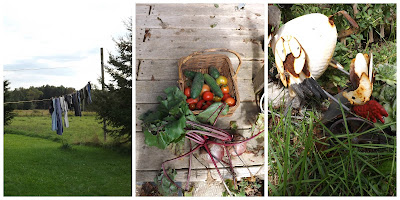 On one of the "wee" breaks I managed for myself today, I headed on over to Wiarton's Facebook page to see this amazing photo of Wiarton Willie.  My Wiarton Facebook page "Partner in Crime" was able to coax Wiarton Willie out of his den this morning with grapes and then get this shot with her Cell phone.  What a great shot it is ! 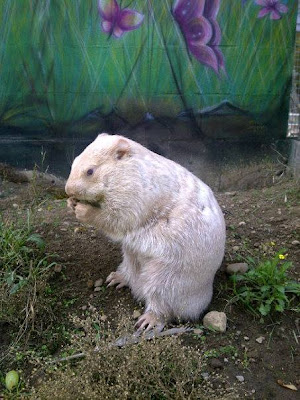 My Rob decided to stay home after he had arrived back home from his run this morning.  Not that he did not have lots to do.

Rob was hard at it with a very deep cleaning of the last Van he had acquired.  Yes Dad, I can sit in here as I bought this one for you too, did I not?, says our Bandit boy. 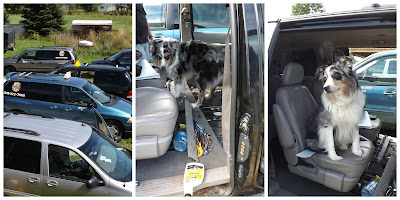 While Rob was cleaning away, I also got at our personal Van.  Another thing that had been bugging me that needed done was it needing cleaned out.  Rob had the Shop Vac out for me so I could get it all vacuumed and dusted out.  Another job well done !!!

We also had to make a trip downtown Wiarton.  Me to go pickup up a couple of cards and go to the Bank, and Rob for a trip into Sadler's Hardware Store.  By the time we arrived back home it was time for me to think about getting our Dinner started.

Remember those "extra" large beets in the photo above?  I was thinking those would take at least a good hour to cook.  I really did not want to wait over an hour for 2 beets to cook, so I thought ...

Break out the Pressure Cooker, as that is why I had bought it to cook "quick" when need be.  I was tickled pink that those super large beets took less then 1/2 hour to cook up to perfection.  By the time I had put together the Chicken Kabobs with Rob had grilling them, the Beets had been ready too. 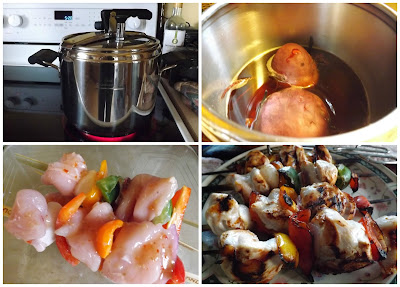 My plate was filled with lots of Colour this evening.  Rob had a huge piece of fish he had brought home from his lunch yesterday.  It was full of nice thick white fish that he enjoyed. 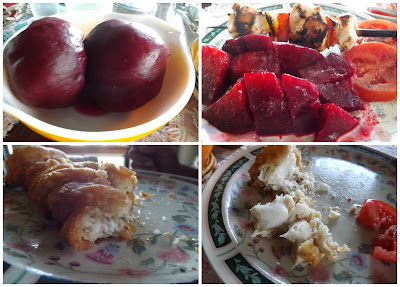 Even though there are still a Million other things to be done, I was quite pleased at all we had accomplished this day, two days before .... more rain.  I even had time out of my day to admire the beautiful Sunflowers in our garden. 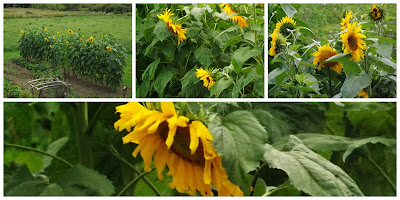 Our boy, Paul, had been over at our friend's Bob and Tim's this evening.  There are lots of change going on over at their home in New Dundee.  I haven't been there since Spring, but with technology of Cell Phones and Data Plans, Paul was able to take photos and email them  to me from his Cell Phone.

A new front door was installed last week.  What a beauty !  And there is a Pool going in the backyard, with installation having just begun the other day.  The Pool? a long time dream Bob has had that is finally coming true for him. 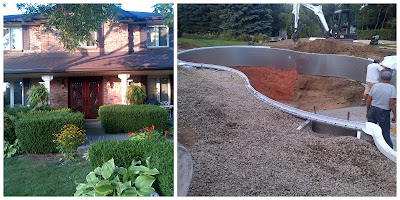