Another Busy? With A Capital "B" Day

Can I spell Busy? with a capital "B"?  I can not only spell it I lived it another day today .... up and at it before 6 am to take care of my brood, with only one coffee in-between, then it was out the door before 8:30 am to pickup my Sunday morning fare then off into Owen Sound I went.

Back in Wiarton just after 9:30 am I pulled into our local Foodland Store before going home to pickup a couple things and use my FREE Kabob coupons I had printed off.  When you spend $10.00 you receive a FREE package of Storemade Kabobs, up to $8.00 I think the girl had said.


I got all of this for $27 & change.  This would be 2 cartons of 18 eggs, 1 pkg of Peameal Bacon, Grapes, 4 very large Prime Rib Steaks, pkg. of Stewing Beef, pkg. of Schnitzel, & 2 FREE pkgs. of Chicken Kabobs (Value $11.00).  Pretty dang good deal if I say so myself for all of that protein goodness and some fruit thrown in. 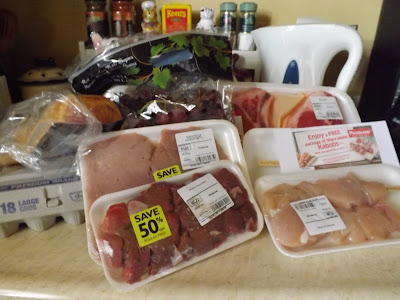 Link for the Coupon for the FREE coupons?  Good until September.   Follow the link:


I had also swung down to the parking lot of Bluewater Park where the Wiarton Volunteer Fire Fighters were getting their Annual BBQ Beef on to slow cook all day to have it ready to serve up by 5:30 this evening.  It was all looking pretty good to me from where I was standing. 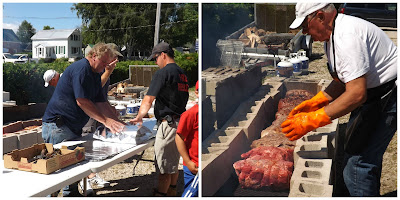 I got home long enough to stick the groceries in the fridge, and let all the Aussies out and about before I headed on down to the Saugeen Gas Bar in Southampton to fill up the Taxi.

I finally made it back home before the lunch out when  our Wiarton Driver, John, dropped in to pickup the Taxi and phone from me, as he was taking over the rest of the day.

Once John had left I did up a sink full of dishes and got ready for Rob and I to head over to Owen Sound, as we had somethings we needed to do over there while together.


Before we got to Owen Sound we first had a stop in Wiarton for Rob to wash my nasty dirty Van, and then another stop in Clavering at Edward's Outpost to have us a snack of fresh Homemade Fries (really really good by the way if you are by there any time). 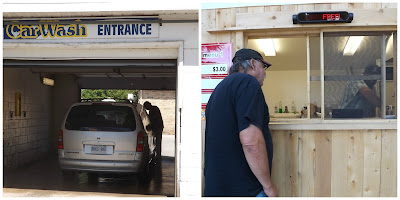 We took the back way into Owen Sound.  I love when Rob takes this way as there is a couple of really really big hills that are pretty breathtaking, especially the one you get on top of where you can see for miles and miles ahead. 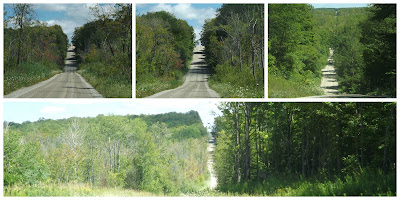 First stop in Owen Sound was at the Tourist Information Centre to drop off some of our Crabby Cabbie business cards, as we have been getting calls from hikers who have used us, who have received our phone number from this office.  I thought a courtesy call in person would be appropriate and a thank you.


The Owen Sound Tourist Information Centre and Marine & Rail Museum share the same building which is located right on the Syndenham River in Owen Sound.  Check out the size of the boat docked there.  That is one big tub of steel, is it not? 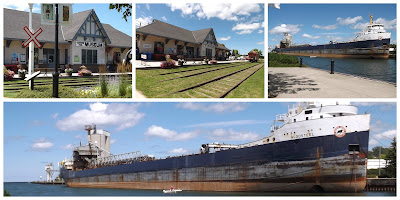 We finally made it to our place of business.  Once there Rob's cell phone rang.  It had been our driver, Carolyn, saying Rob's sister had called and were at our place in Wiarton.  Surprised?   I most certainly had been.  They had been up, for a last minute decided visit, Darol's brother, who also lives in Wiarton.  Funny Delores has her brother and I living here, and her husband has his brother living here too.

As it happened Darol and Delores stopped in Owen Sound where they met up with us on their way back home.  It was a lovely surprise visit.  Delores treated us all to a lovely lunch together at Joe Tomatoes.  Thanks again, Delores, we really enjoyed our time together, however short it was.

Can you believe I had left my camera in the van the whole time we had visited.  Unheard of !!!!

Rob and I got back home, after picking up some things at the Giant Tiger and TSC stores, after 5:00 pm.  There had been a phone message I returned when we had got settled in.


The One & Only Puppy from our very very first litter of Bandit & Lexus over 2 years ago on the 21st of March.  Here is the Buddy boy.  Is he not a handsome dude?  I most certainly think he is. 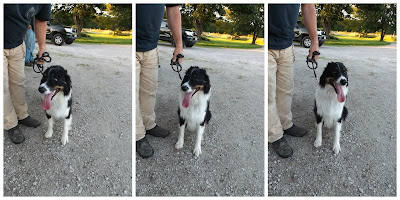 Over 2 years later and they were back to claim our One & Only last  Checkerboard Aussie puppy again.  Thanks Julie, Mark & Buddy.  Their 9 year old son, Jack, is gone on a sleep over and will be one surprised boy when he gets home tomorrow.  I am Over the Moon excited !!!  They fell in love with this One & Only little guy as soon as they had seen him.  Funny thing Mark had been by yesterday when I was gone & had already seen him in the outside kennel, and unbeknownst to me, Julie had been watching the photos I have been posting of him on their Facebook page like a hawk.  Another match made in Heaven I am certain. 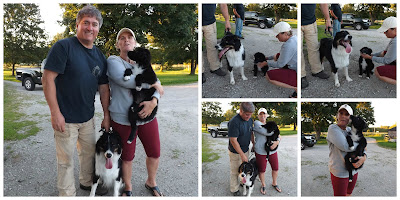 Yes it most certainly has been another busy day with a Capital "B" for me.  My poor Rob has had hardly any sleep whatsoever, but tomorrow morning? he hopefully gets to sleep in "Just North of Wiarton & South of the Checkerboard".
Posted by Cindy@NorthofWiarton at 8/04/2013 09:51:00 pm