When I had signed off my post of last evening saying I had another busy day ahead, I had not exaggerated that point.

Once I was up with all the Aussie and puppy chores done, I updated the "Crabby Cabbie" Facebook page, loaded the weather forecast onto Wiarton's Facebook page, got myself ready, took the Aussies out one more time, then headed on downtown Wiarton for my first appointment at 9:30 am.

I had been 15 minutes to early for my appointment at the RBC, so I stopped in to say "hello" to Debby at The Berford Street Tea Room.  I have been so busy lately I have not had time to "pop in" for a tea there for quite some time, or a brief visit for that matter until today.

I was to my bank appointment "spot on" at 9:30 where I set up two accounts for our grandsons, Aiden and Connor.  We had decided the boys have soooo much that for Birthdays and Christmas' we would start putting money into an account for them rather then buying them more "stuff".  We hope some day it will be enough for them to buy something they might really needed down the line when they are young men.  We can always hope .... for all the best choices to be made when that day arrives.

My next appointment was in the Village of Hepworth.  Hepworth was where my Father's roots began.  My paternal Grandmother's father had Koenig's Blacksmith Shop way back when, which now a days would have been located kitty corner to where the Tim Hortons Coffee shop is now located.

What was the attraction that drew me to Hepworth this morning?  it happened to be all about Duffy's Tavern, a well known Landmark who has been known to many of a traveller from many days long past.

Roadhouse recollections
Duffy’s boomed in Hepworth when Owen Sound was dry and drinking and driving was not a taboo. Change took down the local institution, but a former owner says there’s lots to remember.
The "joint was jumping" the night Eleanore and Don Ruck and another couple arrived in Hepworth to take over Duffy's Tavern.

The roads from Hamilton were so snowy that the new owners could hardly see to drive north. But the parking lot at Duffy's was full and the music spilling out of the building.

Today the old, square building the Rucks eventually walked away from 15 years ago stands empty and scarred, the friendly neon welcome sign and familiar, well-trod concrete entrance long gone, the doorway beyond reach.

As Eleanore eyes the place from across the highway, she's not sure how much she regrets the move, her more than 20 years of hard labour, the years of steady decline, and finally abandoning the business.

But she's not sad to see the building's sorry state.

"Not at all, not anymore," Ruck said.

Her stories of that first stormy night, challenges learning the business, the ups and downs, the music, the friends and customers and how it eventually all ended are part of her recently published reminiscence Duffy's. It's subtitled I Don't Remember When I Finally Realized The Dream Was Over, but I Remember How It Began.

They were living on Hamilton Mountain, a new house, raising a seven-year-old son, both working in the steel mills.

Don's job had him in the heat of the plant. His health was slipping. Doctors suspected cancer, said get out of Hamilton, Ruck recalled in an interview about the book and the years in business.

Don and a friend cooked up the plan to buy a country hotel together, settling on Duffy's at a bargain price.

"The wives didn't know a thing about it. He sprung it on me that this was what he wanted to do and of course I fought him every inch of the way," the author said.

The two couples ran Duffy's Tavern together for three years, then the Rucks bought their friends' interest. The next more than 20 years were sometimes sad, sometimes happy.

The beginning of the end for Duffy's came when Owen Sound voted in the 1970s to allow alcohol sales. That, tougher drinking and driving regulations and shifting public perceptions against impaired driving eventually put them out of business and unable to even sell the building, she said.

Where once the family had a staff of 13, she and her son were doing most of the work toward the end and siphonning their saving to keep the doors open. The building continued to run down as they tried for several years to sell.

"I was putting in 16, 18 hours a day. It was having an impact on my health," Ruck said. "I was more or less married to the place and by that time nobody wanted country hotels anymore. We had to just walk away from it."

But the place had been an institution, known for its music and the coldest draft beer in the area. Despite its sad ending, there is much in their story to celebrate, Ruck said.

She started writing the book as a family reminiscence, a tribute to her mother and uncle and two aunts. That's all in there as well, but so much of what she wrote, and so much of her life, was about Duffy's.

So that's what she called the finished work.

"Nobody ever put pen to paper and wrote anything down, so I just wrote little things I remembered and then I put it all together and put it in a book," said Ruck, now 75. "It was important to me, and it was all very interesting stuff."

It should also appeal to anyone who was ever a customer, or who has an interest in the old hotel's characters and local history. They will know many of the people Ruck includes in her memoir, she said.

Duffy's is available for $27.99 at Trophies Two, The Downtown Bookstore and Wal-Mart in Owen Sound, and at the variety store in Hepworth.

Today I was invited to see behind the scenes on what Duffy's Farmgate Market will become, along with turning the old into new memories down the road from now, or actually beginning on the July 1st, 2013 Weekend.

Here is a "sneak" preview of behind the scenes before the Grand Opening. 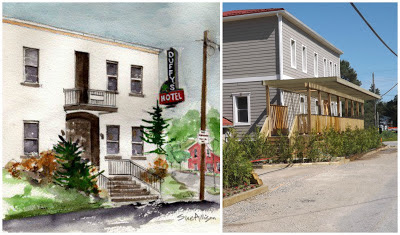 Duffy’s Farm Gate Market Inc, a new All Season Farmers Market, Cafe and Business Centre, located in the Town of South Bruce Peninsula, Ontario on Hwy #6 North, en route to Wiarton, is creating the new economic hub of the community by welcoming visitors at the gateway of the Bruce Peninsula, by building an infrastructure supporting local small businesses and local food producers.

"Hepworth will become a destination; what we're creating is an incubator for small business." ~ John Schnurr

Phase I launches an assortment of new and established businesses:

Duffy’s will operate with 50 local businesses creating a foundation for an excessive 100 new jobs.
The venue will offer fundraising opportunities for local charities by sponsoring weekly concerts and beer garden.


The top floor of Duffy's has been turned into a waiting room, offices (some still available for rent), and a board room that is available for rent.  Very accommodating for any professionals needs, as well as tastefully decorated. 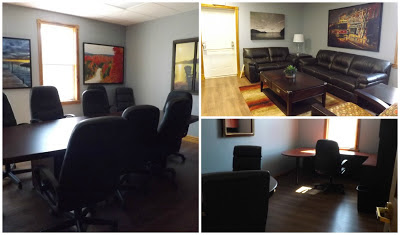 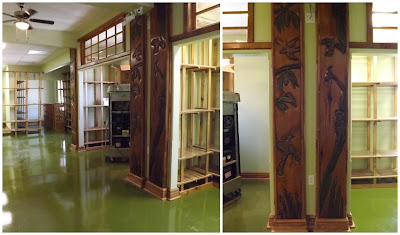 The Main Floor of Duffy's will be a indoor Farm Market and Cafe.  Custom work such as the hand carved posts are in full evidence adding an inviting warmness to the building. 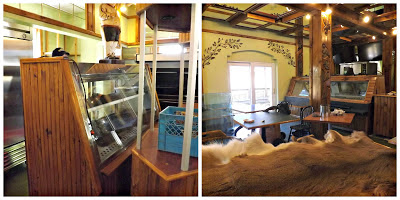 I, myself, have at least two memories of drinking a couple draft beers at Duffy's Tavern.  Should my father, Fritz, and his brothers still be alive, I am certain they would have many many recollections of Duffy's Tavern from their days of growing up in Hepworth, before moving to Southampton.

Special thanks to Rhonda Flanagan, who personally toured me through Duffy's Tavern, and was more then happy to have me come down for a tour today, especially being so hard pressed for time herself with the opening coming up so quickly.  Rhonda also had emailed me the information noted above of what Duffy's Tavern will be and what it is still to become.  Thank you, Rhonda.

I am already looking forward to going back to Duffy's Tavern after its Grand Opening to see the completed "finished" state of everything !

My third appointment of the day had been back again in Wiarton.  Really I did get home eventually today to finally get a few things done this afternoon, although not as much as should have been done.


What I did do was help Rob to get the Barbecue from out of the barn up to our deck.  Rob also brought up the patio table and chairs.  They still all need cleaned, but half the battle is done by at least having them up and in place. 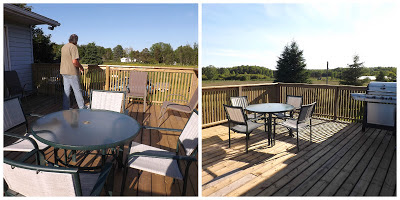 Our first BBQ of the year was Pork Chops grilled after being marinated in Maple-Mustard BBQ Sauce for a few hours.  Very good. 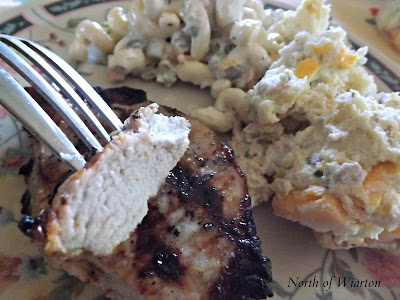 It had been late by the time we got going on Dinner, so I ran downtown to get a couple of Deli Salads.  That will be the last time I do that, as neither of us cared for them one "iota".  When you are used to making your own salads fresh and from scratch, store bought does not cut it at the best of times ....

It is almost 8 pm, I have puppies and adult Aussies who will need my undivided attention very shorting.  Tomorrow is yet another busy day ahead of me, "Just North of Wiarton & South of the Checkerboard".
Posted by Cindy@NorthofWiarton at 6/19/2013 07:57:00 pm