It Certainly Was A Monday

This morning I was sweeping up at least two dustpans full of dirt and loose grass from children and a Bandit dog, plus a couple of adults in and out of the what seemed liked a revolving door this past Saturday.  I gave everything else a quick lick and a promise as there wasn't much time before my Niece was arriving this morning with my oldest sister, Jeanne, and her husband, Cecil.  They are in Ontario up from their home in Newfoundland visiting for the Month of June.

I had actually been downtown when they did arrive.  Rob was home to greet them at the door, but that was the extent of it as he was on his way out to pickup up a Taxi customer.

It was great to see them as it had been 6 years since they had been here the last time.  A lot had happened between that time and now.  Cecil had survived an awful bout with Cancer, spending over 30 days in intensive care, with Jeanne having had a stroke not long after he had finally returned back home.  It is a miracle that they are here today with us.  We are blessed.

My Great Great Niece, Deja, now a year old is visiting Grandma, my niece Joanne, my sister's daughter.  She made a bit strange with everyone, but she has been a very busy little girl since her and her parents arrived from BC last week.


Deja loves doggies, as she has two of her own back home, so was outside with us when we had taken Buddy out  for a bit of a run this morning. 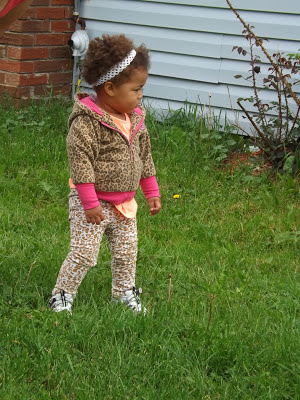 I had just gotten a pot of Homemade soup on and ready for our Lunch when Cecil seemed to take a turn saying he wasn't feeling too good with a lot of congestion going on in his chest.  I left Rob, Joanne, and Deja, and loaded up Cecil and Jeanne to head on down to the Wiarton hospital.

It had been very busy today at the emergency department.  We did get into the Doctor though only after a 3 hour wait.  Much less time then if we had been in a City.

The Doctor who had attended to Cecil was a very nice man.  He listened to Cecil's chest and diagnosed him with Bronchitis, sending us on our way with a prescription for antibiotics and a puffer.  After supper and a cup of tea he headed off to bed for some much needed rest.

Between people visiting puppies at 4, making supper, doing up dishes, on Aussie and puppy detail, I am starting to feel a little weary at the moment.  With Cecil and Rob both gone off to bed already, I am thinking Jeanne and myself will not be long to follow.