Wide awake at 3 am with no husband beside me.  I picked up the phone to call him to say, "where are you?"    Funny, you think I would be used to waking up with him not home in the wee hours of the morn, but it still gives me a start at times.  The response I received was, "I am waiting for the drivers to finish up an then I will be home".  Good thing I always have my protector Bandit at my side at all times, as nobody would get through our doors with him behind them.

Bandit, Lexus, Mercedes, Buddy and the Everything 8 puppies were all looked after at 6:30 am.  A coffee into me while I updated the "Crabby Cabbie" Facebook page with .... 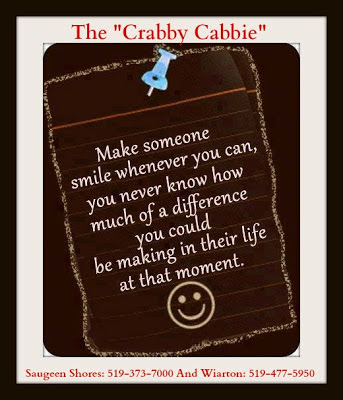 I loved posting this, as it can be so very true.  Really what does a *smile* cost you?  just an uplift of a different facial muscle.

I was out the door before 8 am heading into Wiarton to pickup my friend, Lynn.  We were headed off to my longtime friend's place in New Dundee, a 2 1/2 hour drive away.  We were going to meet up with my Cousins and friends for a Psychic "reading" from friend Alex.


There is Cousin Krista.  Her and her friends arrived a bit after the rest us had arrived.  I think she had said she had gotten lost "again" ... ha!  My longtime friend, Bob, aka "Boston Bobbie", who was hosting this "gig".  Not only was he a wonderful host, as usual, it was also his 60th Birthday today.  Doesn't look a day over 59 1/2 years old, now does he?  Bob has been collecting 3 legged Tea Cups & Saucers, so that was his gift from me.  He was thrilled with it.  The girls had went together and gotten him a couple bottles of wine.  Nice touch girls, as Bob does enjoy a glass or two of wine from time to time. 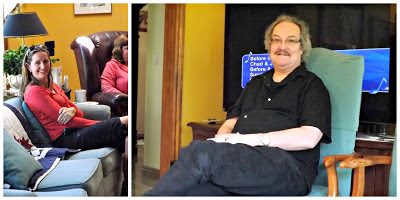 We all had fun.  There were lots of goodies everyone had brought along to nibble on throughout the day.

I had baked a Grandma's Apple Cinnamon Cake last Sunday.  I had froze it and taken it out yesterday to thaw for today.  I was very nervous as I had no idea if it would turn out mushy or not.  I was thrilled that it turned out "perfect" with everyone raving on how good it was.  Really if you would like to try it, it is an awesome cake.

Lynn and I could have probably stayed longer to visit, however I had to get back home as there were eight little mouths that would require feeding by the afternoon time.  We arrived back home around 3 pm.


Sure enough there were 8 little sweethearts very happy to see me. 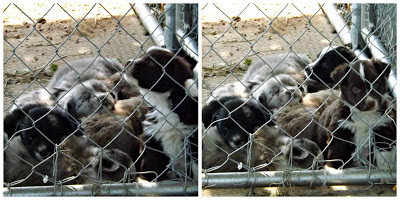 Rob had been home, having had looked after all the adult Aussie's needs, however the babies I had fed before leaving had been beyond ready for their afternoon feeding.

I had been happy to find out not one of our Aussies had made a peep, allowing for Rob to finally get himself some much needed sleep.

Rob and I had both still found ourselves tired by the time late afternoon had rolled around. Too tired to really bother much with making ourselves any Dinner.  I called up my friend, Toni with an "i", and her husband and her agreed to meet up with us for a Dinner of Chinese Buffet in Owen Sound.  It was really good with no cleanup involved.  My kind of dining.

We did get back home to get everyone settled in for the evening.  Rob has headed off to bed already with me not being too far behind him, "Just North of Wiarton & South of the Checkerboard".
Posted by Cindy@NorthofWiarton at 6/09/2013 08:55:00 pm