I have a very busy week ahead of me with company arriving this weekend, a day away, and company arriving thereafter for a week.  All of this plus my every day "normal" stuff, whatever I consider what part of my life is normal at any given moment.

I am still on board with the Money, however once I had pulled a muscle last week in my lower back that was the end of the Squat Challenge for me, putting me back to doing "diddly Squat" again.

How is everyone else doing on the Money Challenge, and how did everyone who participated do on the Squats?

Yes it was a very busy kitchen day .... as I had been cooking and baking up a storm.


A most favourable stew as you can see.  Ha, no I did not serve this up to Rob.  The Everything 8 had their very first Solid meal today.  Check all about that by going HERE. 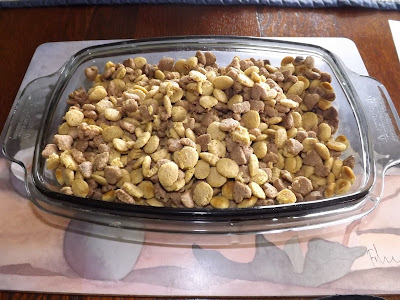 The morning flew by me by the time I had taken care of all the adult Aussies, then attended to feeding and cleaning up the puppies.  Not only that was done, it was month end and I had to get the Crabby Cabbie billing down this morning too.

Finally I got down to the other things I had planned on doing today, and housework didn't make the list.


A double batch of Hamburger Soup was put together to simmer on the stove top.  Lots of chopping was going on. 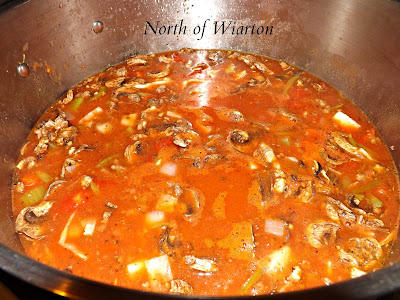 While the soup was simmering, I began a "new to me" brownie recipe.


The recipe I tried was Chatelaine's Best Ever Brownie Recipe.  Not only rich in flavour, also rich in cost considering a double batch takes 12 squares of chocolate & 6 eggs !  YIKES !!! good thing I had the chocolate squares in the freezer and had gotten them very cheap after Christmas, or otherwise I think I would have been trying another recipe. 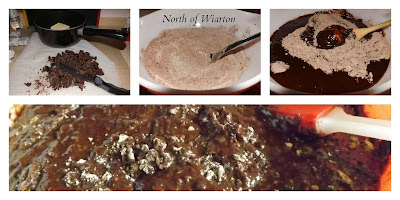 Rich chocolate flavour, moist and a delight to put in ones mouth.  I was far from disappointed with these Brownies. 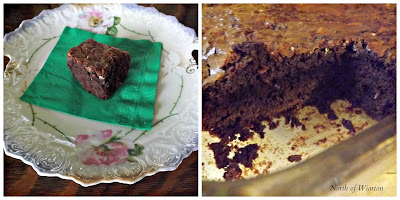 Recipe Shared at Ms. enPlace: See Ya in the Gumbo

Just before the brownies had came out of the oven, I got going on mixing up a Grandma's Cinnamon Apple Cake.


This will be the second time I have every made this Cake.  We really had loved it the first time I had made it, and it was made a "keeper" in my recipes at that time.

NOTE:  For Brownies and Apple Cinnamon Cake I used the Convection setting on my Oven increasing the time by 10 minutes (oven temperatures do vary).

The Apple Cinnamon Cake I made for a function I am attending to at the end of the week.  I am hoping this cake freezes well, as I am trying to get a jump start on everything I need to get done this week, as well as taking advantage of the cheaper hydro rates today.

I did have a Chicken out thawing for our Dinner.  Needless to say it never made it into the oven as I was otherwise occupied as you can tell.  Thank goodness I had the soup made, as Rob and I both enjoyed a bowl of soup along with a grilled cheese sandwich.  Thank goodness for good old stand-by products like cheese and bread.

In-between all of this, the puppies did get a second feeding this afternoon.  Thank goodness Rob was home, as he took over the taking of everyone else out and about for me.

I still have to make our bed, as I will not be getting back into it this evening until it has been made, "Just North of Wiarton & South of the Checkerboard".