Shot In The Arm

No we didn't get to see Bon Jovi "Live In Concert" playing Shot In The Dark, but we did head over to the Public Health Center in Owen Sound first thing this morning.

"Look at the size of that boat docked directly behind the Public Health Center."

"Oh dear would you look at that mournful "puppy dog" look my Crabby Cabbie has all over his face." 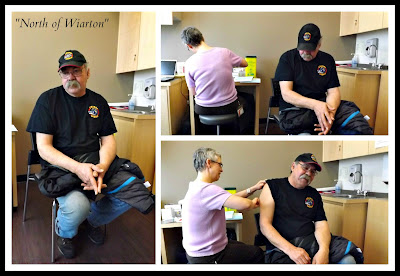 "No Bon Jovi, but I did have MY Crabby Cabbie who took a Shot to the Arm." 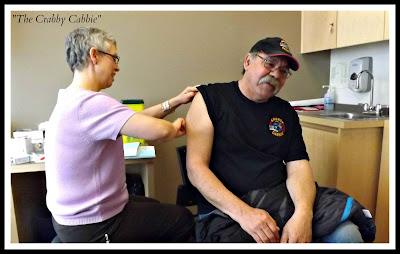 Ha, ha, ha ... and the Nurse had no problem playing along which made it all the more fun !

Speaking of puppies, after we had our Shingles (Herpes Zoster) Vaccine, along with a Tetanus, Diphtheria and Pertussis (Tdap) Vaccine (whatever all that means, but the Nurse had said there had been an outbreak of the Whooping Cough and this was a preventative along with the Tetanus), we headed into No Frills to pickup some Puppy Food, as weaning the Fabulous Four will commence next week.

We have decided to give the PC Dog food a try.  The puppy food impressed me when I read the first ingredient was Chicken, opposed to Pedigree's being Corn meal.  This is a good sign they as to what they are getting rather then just a "filler" in my opinion.

When we got home the first thing I had to do was the February "Crabby Cabbie" billing before Rob headed back out the door to do his "Crabby Cabbie" job.  I had it all done just after the Lunch hour, with him then good to go.

I then finally got to do up dishes that had been left in the sink, and make our bed with it well after 1:00 pm that I am sure it was.  Oh man it is never ending is it ???  and of course the "gang" all needed out, about and back in.

Mid-afternoon my "Crabby Cabbie" called me and made my day.  He had a regular Taxi customer of his tell him how pleased they have been with his service and dependability since he started our "Crabby Cabbie" Taxi Business.  They could not be more pleased as he has provided them with the best service they have ever had, is what they had told him.  Nice, really nice compliment.

It didn't end there ... a man called him to arrange fare for his wife, and had been recommended the "Crabby Cabbie" by friends, as he was told how "nice" the Crabby Cabbie owner was.  Awww, see he really isn't too "Crabby" at all with people giving him recommendations.

Wow if that didn't add some Sunshine to our day I don't know what else could !!!  but there was more Sunshine added ..... Auntie Gladys returned Rob's call of yesterday to her.  He had called and asked her if she would make him Lasagna.  The Nerve of him I can not believe !!! or can I ????  Ha... she called him today saying, "Eby's Take-Out", telling him she would make him a Lasagna next week.  OH MY GAWD what am I going to do with my MAN ????  his is a "nut bar" he is !!!  Thank God I love him, as I don't know who else would have him.  Ha !

Regardless of what a kidder, or how crabby he might be some mornings, Rob is still MY Crabby Cabbie, and there are days I love him to pieces, and then there are ... let's just say, "other" days we won't talk about.  *Smile*

Late this afternoon we had Visitors !!! we very seldom have visitors so of course Bandit and Lexus were pretty happy with this, especially having visitors two days in a row !  Wowsers !!!

"This Baby Boy, Liam, and his big Sister, Mackenzie, who came visiting today with their Mom & Dad, Linda & Mike." 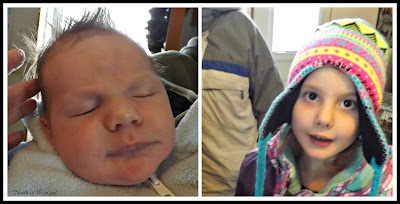 "They came to visit their new puppy, Semah.  They are in love with him by the looks of how it all went.  The first time they had seen Semah, other then from photos on the "Checkerboard Aussies'" Facebook page." 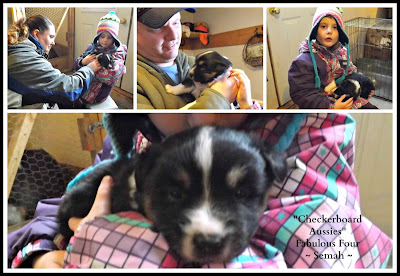 "Mackenzie wanted a photo of Semah so she could take it to school to show all her friends.  She was happy with this photo." 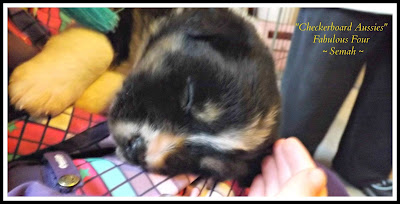 I really enjoyed the visit with Mike, Linda, Mackenzie and Liam, even though it was Semah they came to see ... *smile*.  I used to work with Mike and Linda, and really I love seeing them, even though we have been in contact on Facebook for the past few years.

"Buddy didn't want to miss out on any of the action going on inside, so he perched himself on top of his dog house to keep an eye on what was going on.  Awww, what a sweet face he has." 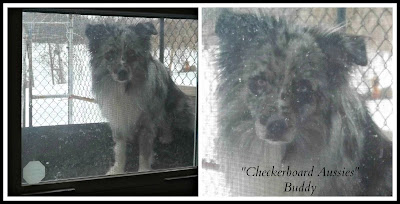 Once Semah's new family left for home, we all had another out, about and back in before I returned upstairs to return a couple of phone calls from messages people had left.  One of the messages had been someone inquiring as to whether I provide Stud services with any of my dogs.  Once we had established, yes I would be interested in doing so, their choice was Bandit, who they had also seen on their "Checkerboard Aussies" Facebook Page.  I am telling you, our Bandit has been quite the sought after boy ... there isn't many a person who has met him that wouldn't like to take him home for their own.  Ha ! fat chance of that ever happening !

I had a lovely comment again left by my Secret Sister, Susan at the Food Chronicles that she had posted on her blog the box of goodies I had sent off to her that she had received Wednesday.  Drop on over to see what goodies she got by *clicking* HERE.  Do you not just LOVE surprising and making people HAPPY???  I DO !!!

Holy Crap Batman it is almost 9 pm and I am still sitting here typing away like there is no tomorrow !!! that is going to end very shortly as I still have to take the "gang" out one more time before I get to call it a night, "Just North of Wiarton & South of the Checkerboard".
Posted by Cindy@NorthofWiarton at 3/01/2013 08:46:00 pm