Step Ahead, Then Two Back

This morning got off to a pretty good start with Rob out the door with his "Crabby Cabbie" hat firmly set upon his head, the "Checkerboard Aussies" out, about, in, fed and happy, the bed and few dishes all done up early.

A bit of puttering went on here and there in the house with a couple phone calls this morning with friends, then before I knew it was time to go back out for a bit of a run again.  It wasn't sunny and warm, however it was not freezing cold by any means.

"Lots of amusement for me to stand back and look upon.  This photo I could not get Bandit and Lexus put in so took a photo of each separately.  Bandit did move with Lexus ready to "pounce" on him." 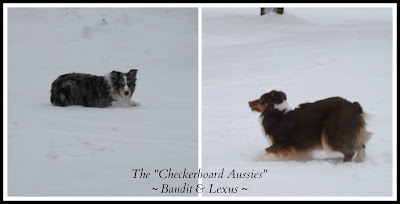 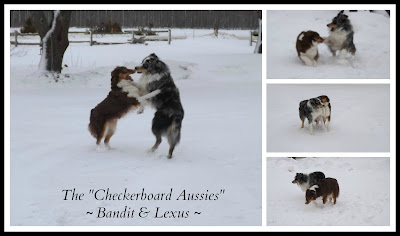 "Missy Mercedes then had a turn.  She always has herself a "blast" in the snow.  Earlier this morning her and Buddy had been back in the run together having just as much fun." 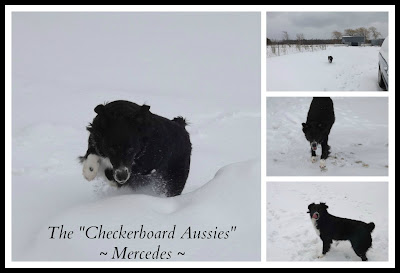 I had entered into another Challenge this month.  This time it was a "sort out recipes" challenge put on by my Blogging Buddy, Debby over at Nanny's Place.  I am sure her and I had this discussion about the state of recipes (mine being a total disaster of course), so I was happy she put this challenge out there.

"I pulled all the loose recipes out, along with the 2 beautiful Recipe Binders I have never used, across the Diningroom table.  I had it in my head I was going to get this started this day."

That is as far as it went, no farther then my head, as a Aura had set in at exactly 11:50 am when I looked at the clock.  I took a migraine pill and sat myself down with a bottle of water.  Two hours later the medication had not worked, so two Tylenol 2, along with 1200 mg of Ibrophen was my next plan of action.  At this point I had felt sick to my stomach, ready for my neck to snap and my head to fly from my head.  Anyone who knows what a migraine is about knows exactly how I was feeling.  Rob called and I couldn't even speak to him as it had felt too loud.

Of course any other day the phone would not ring, nor anyone would ever come to the door.  Not this day ... almost drifted off into a semi-sleep each time the phone rang on four different occasions with a visitor at the door around 3 pm.

I really wished I had felt better, but then again the pills had begun to work, and I was so happy to have had one of my "favourite" people drop by ....

"Anita Dejong of Dejong Acres Farm dropped me around some of their farm fresh eggs.  My eyes "lite up" when I seen the nice new labels they now have." 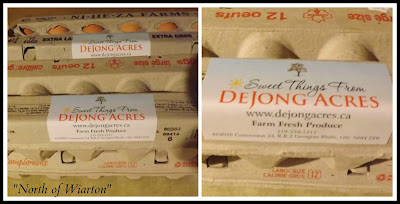 I absolutely enjoy anytime I get to see and visit with Anita as she has one of the nicest smiles going !  Just before Anita had to leave Rob had arrived home, so he was also able to have himself a wee visit too.

Since today was Shrove Tuesday, otherwise and sometime known as Pancake Tuesday, I had promised Rob pancakes and bacon for Dinner.

"This is what I set myself about doing trying a recipe I had gotten from Chatelaine for Whole Wheat Pancakes Made from Scratch."

Not fluffy and light like a Buttermilk Pancake, however they were very tasty, good and filling, by hitting the spot.  How could they not be as we used the Pure Maple Syrup that we had in our pantry from where else then Dejong Acres Farm.  Nothing better then goodness of PURE.


"Then there is always time for a little "puppy love" isn't there?" 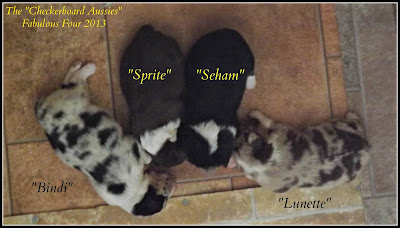 Really it was a "step ahead day, then two back" with me carrying on forward after all.  It is late, I am tired, and it is way past my bedtime, "Just North of Wiarton & South of the Checkerboard".
Posted by Cindy@NorthofWiarton at 2/12/2013 11:04:00 pm