My Crabby Cabbie & the VON Piggy

Old Man Winter has not left the building; at least not in Southwestern Ontario.  Yesterday afternoon he raged, still continuing on this morning with Schools cancelled and road closed.

"6:00 am and the "Crabby Cabbie" vehicle was put to yet another test, however never making it out the end of the lane way on down the road.  Someone (mentioning no names here, was apparently trying to put the cart before the horse), had to walk way back down to the drive shed to retrieve the Leyland Tractor to the rescue."

I, on the other hand, after taking these photos through the window, by remaining snug as a bug in the house until at least 7:00 am before our Aussie gang required out, about and in.  Before that routine was taken care of I had done up the dishes and made our bed all before 6:30 am..

What was I going to do today I had wondered?  I looked up towards the top of the Display cabinet and decided today was the day everything from a top of it was going to be moved, washed and put back nice and dust free.  There is always dust & more dust everywhere I look each day, as when you heat by means of a wood stove this is the way it goes, giving more dust then naught.

"Really photos do not do dust justice at times, but really the photo to the left had dust galore on those there Oil Lamps, but were completely dust free and sparkly by the time the photo to the right had been taken.  Honest !"

"I had some good memories pulling at my Heart strings wen I dusted these photos of my Dog of 13 years.  These are of Bo Von Guard.  The photo to the left with the pup curled up was when he was 13 years old, and to the right when he was in his prime of 125 lbs at 2 years old.  He was one of the best dogs I have ever had in my lifetime.  Bandit has ran a close second, but never has made first past our Boggie dog." 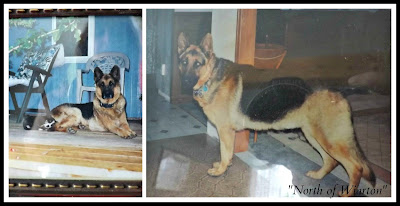 Rob had called me late morning to tell me he would be home around the lunch hour.  We wanted to stop out at a printers to get some pricing, then head on over to Owen Sound to pickup a few things as well as stop in to see Angela Campbell at the Grey-Bruce VON offices.  Angela headed up the VON Pennies for the Piggy project, and had requested all who were involved if they could drop off their VON Piggy along with what had been collected by the 28th of this month.

"Here is my dear "Crabby Cabbie" Rob carrying all those heavy pennies in to pass over to Angela." 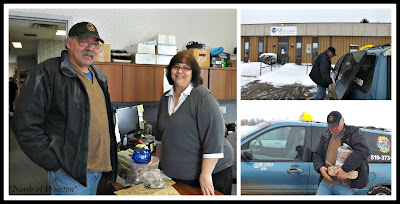 Rob has asked if he could keep the VON Piggies in his "Crabby Cabbie" vehicles to raise more money for the Grey-Bruce VON (a non-profit organization) so he could continue to partner with the VON Piggy on a regular basis.  It was decided and the VON Piggy and Crabby Cabbie are to remain partnered !  Rob is very please to be able to contribute to an organization such as the VON who is always giving back to its communities.

I am certain it will be a successful partnership for both my "Crabby Cabbie" and the VON Piggy, as it has been in the past few months.

Angela sent me an email before we had arrived home.  She had counted up the money we had rolled, along with the loose change to let us know the "Crabby Cabbie's" patrons had contributed $127.90 to Grey Bruce VON.  Way to go "Crabby Cabbie" customers !  Thank you so much for all your wonderful support !!! as does the Grey Bruce VON !

How could I forget, as I almost did, that I was down in the basement today having myself some "Checkerboard Aussies" Fabulous Four Puppy time.  Well I must admit I do have me a bit of "puppy time" every day, as I absolutely can not help myself, could you?

"I couldn't help but notice how much sweet little "Sprite" resembles her Mother Lexus.  What a sweet little doll she is, oh yes the pup is too ... *smile*." 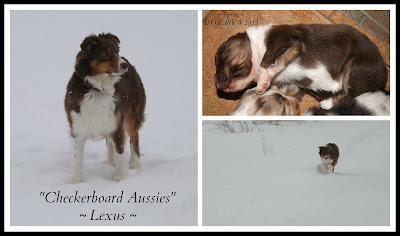 There was lots more Fabulous Four "puppy love" going on this day.  Just see for yourself by *clicking* HERE.

After that day, along with shopping at Staples, Giant Tiger and No Frills, coming home to put groceries away, I was happy to heat up a bowl of Homemade Big Batch Chicken Soup for our Dinner, with a Gala Apple for dessert.

The fan part came in for our Freezer today !  Rob has replaced it and we will transfer everything back into it tomorrow.  That is one way of cleaning and organizing a freezer, regardless of how unpleasant.  Now I look forward to our new Range oven's arrival, but that won't be happening until the first week in March.

I am off to stoke the wood stove, as I am feeling it is getting a little too cool in here at the moment.  I sure do not like feeling too cold, loving the warmth our wood stove gives us, "Just North of Wiarton & South of the Checkerboard".
Posted by Cindy@NorthofWiarton at 2/20/2013 07:02:00 pm