Thank you for all the well wishes on my migraine getting better.  Headaches and migraines are something I have lived with all of my life.  With my neck issues I really do not think I will ever be without them.  There are worse problems in this World, so some of these things some of us learn to live with.

Lots more went on with the boys and I yesterday at the Wiarton Willie Festivities.  The Wiarton Optimist Club put on a Fun Day for Children from 11:00 am to 4:00 pm.  What a wonderful gesture on behalf of the Club and those businesses who sponsored this event for the Children.  A very BIG Thank you !!!

After all the fun on the big "snowbank" we headed on inside of the Big Tent.

"First off the boys entered into a draw to "guess" how many jellybeans were in the jar, and got themselves each a bag to collect goodies along the way."

"Here we are with Karen of Karen't Creations Scrapbooking in Wiarton, who was taking family photos as her part of giving back to the Community.  Thanks Karen, we love the photo."

"This is where it all began "putting them to work", and what fun they had with a hammer and nails." 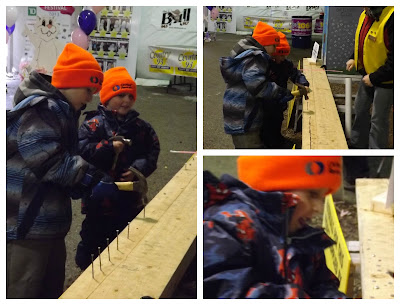 "Much warmer fishing in under the Big Tent, and the prizes were not one big slimy."

"The Bruce County Library Team was there from the Wiarton Library.  What fun there was first by making pictures, then some pretty awesome bookmarks." 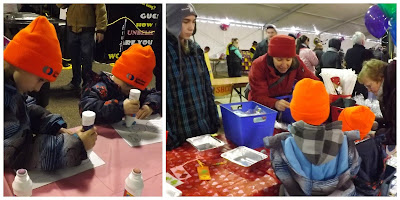 "Hey there is Stu Paterson !  Stu won the 2012 Salmon Spectacular with the largest Trout entry.  Here they are with Handmade Bird Feeders they were handing out to families along with a bag of bird feed." 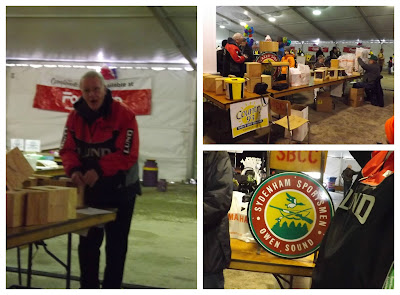 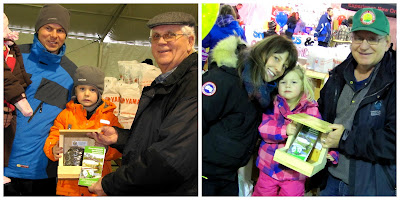 
feeders thanks to a co-operative effort by two regional conservation clubs.

Volunteers from the Sydenham and Bruce Peninsula Sportsmen’s Associations


handed out the feeders at the Kids Day Party in the Big Tent, at the 2013 Wiarton Willie Festival.


Children 12 and under were happy to receive the feeders which were built by club members.
Included were 2-pound black oiled sunflower seed packs donated by Doug Gilkinson and staff at Bayshore Country Feeds in Owen Sound.


The feeder project is designed to encourage young people to learn about, respect and appreciate, nature and conservation. The giveaway included pamphlets on several Birds common to Grey-Bruce.


Anglers and hunters are the best conservationists. These two community


Clubs lead the way in this part of Ontario, helping to preserve and protect fish and wildlife. Both Bruce Peninsula and Sydenham club members, go out of their way to encourage young people to appreciate the outdoors, and try to help them understand the magic that nature has to offer.

Thanks Stu.  I am pleased to say our Grandsons, Aiden and Connor were most fortunate  recipients of a Bird Feeder thanks to these wonderful organizations and volunteers.

Today was a pretty good day, as I did wake up without the migraine so that was good in itself.  I did manage to change our bedding, do one load of laundry up to hang on the clothes horses to dry in front of the wood stove, and sweep up at least one extra dog off the floor.

I also managed to get in some "Fabulous Four" Checkerboard Aussie puppy time.  I will post their most recent photo here, but from here on in any puppy updates and photos can be found on the "Checkerboard Aussie" blog by going HERE. 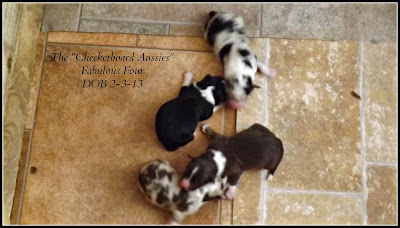 "Supper was amazing ... a Peameal Roast done in the Slow Cooker, served up with boiled Red Cabbage and white potatoes." 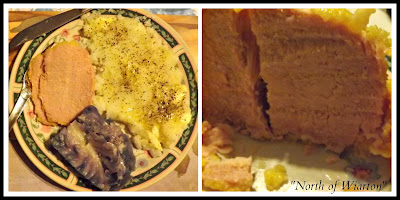 It was a good day, however I am looking forward to another early night, as both Rob and I are feeling pretty weary this evening, "Just North of Wiarton & South of the Checkerboard".
Posted by Cindy@NorthofWiarton at 2/04/2013 08:21:00 pm